goNORTH seedlings stage has begun to announce the acts that will be playing the “hotbed of talent” in 2013. 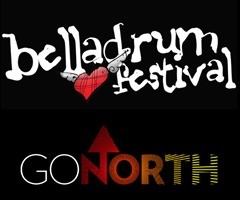 “We are delighted to have programmed the majority of the goNORTH Seedlings Stage from our 2013 Showcase List”, said goNORTH Director for Music, Shaun Arnold.”Belladrum is a key festival on the wider Scottish calendar, and has developed a fantastic reputation for supporting new artists to develop their audience”. There is no better example than this of course than 2013 main stage headliner Twin Atlantic who has risen from the ranks after first playing the Seedlings Stage.

“It’s another fantastic year for unsigned and emerging talent at Bella”, added Festival Director Joe Gibbs. “the majority of these acts can be found at the goNORTH Seedlings Stage which has become a mecca for people seeking the next wave of music talent coming from the Highlands and wider Scotland.” Indeed the Inverness itself is  represented in this list of acts by Red Ronson, Dylan Tierney, Lionel and The Oxides.

For news on the forthcoming goNORTH Festival on the 5th and 6th of June and of course see our other Belladrum 2013 news.