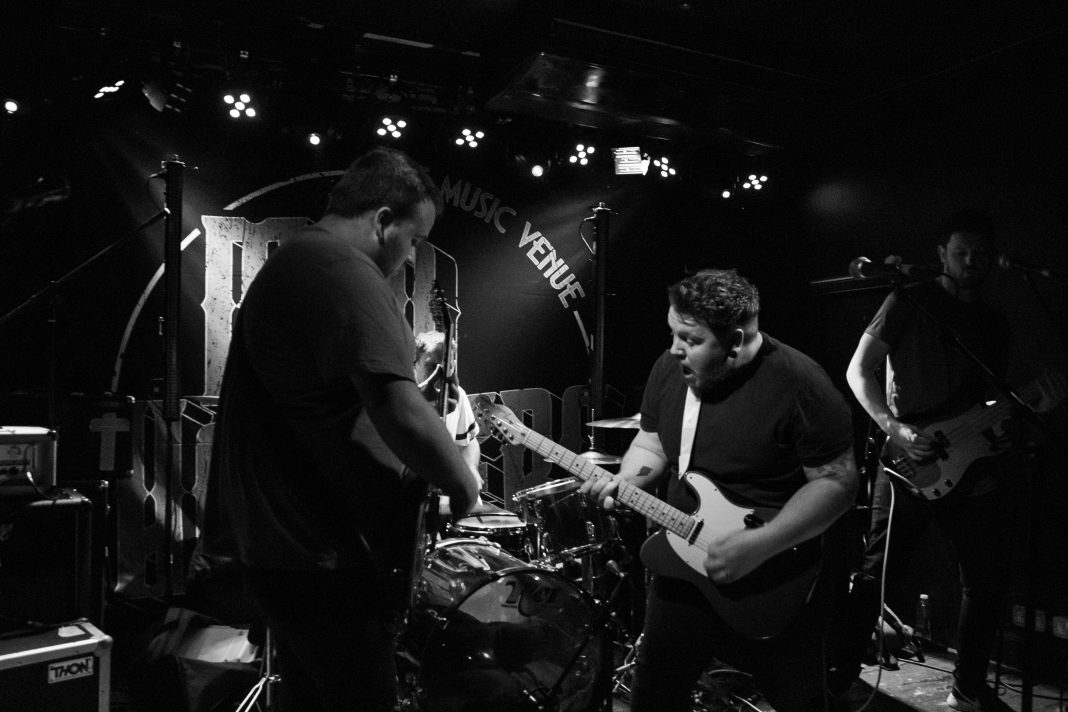 After last year’s near-disaster with a cancelled venue to contend with, the mini festival seems to have established a home at Mad Hatters. The Outsider Festival is the brainchild of promotor Stephen Baikie and to his credit, he hasn’t let last year’s trials and tribulations put him off and he’s curated an impressive line-up for this evening.

In the interests of clarity (and to prove we’re not trying to fudge a review!) we were a man short on reviewer/photography duties and weren’t able to attend for the full event. It was felt however that it would have done the event a disservice to not attend at all and it was better to provide a bit of coverage rather than none at all.

It’s always going to be a challenge to host an event on a Sunday evening but attendance on the night is good and early attendees were treated to great sets by opening acts Monsters in the Ballroom and Forgetting the Future.

Witch of the Vale made an immediate impact with a set of electronic, goth tunes. Husband and Wife duo Erin and Ryan Hawthorne are as visually impressive as they are sonically. Erin in particular very much taking on the persona of the witch who may well eat your soul if you dare to give the band a poor review! Ryan, decked out in feathers and hood provides a backing track on keys along with shamanic beats pounded out on a single tom drum.

Erin’s crystal clear vocals flit between haunting and heart-breaking, very much putting me in mind of Hope Sandoval or Liz Fraser from the Cocteau Twins. This is a brave addition amongst the guitar-heavy lineup and it’s a not-so stark contrast that works very well indeed. It’s one of the highlights of the evening  and the rest of the bands have a tough act to follow.

Crashes have made their way up from Glasgow and drive the volume back up to a 110 with heavy as fuck riffs and infectious hooks. They’ve described themselves as pop-rock but and they’ve certainly got the melodic sensibilities of the Foo Fighters and Biffy Clyro while remaining very heavy indeed. It’s an energetic performance and I suspect we’ll see them head back up the A9 before too long.

Sadly the lurgy is beginning to take it’s toll on me and I’m not really able to fully appreciate the Alkanes set. It’s high-octane stuff though and the trio create a grubby alt-rock noise that’ll appeal to anyone who likes their music raw and unfiltered. The Inverness band are already reasonably familiar to the local music scene and their chaotic racket is well received by the punters who’ve dragged themselves out on a Sunday evening.

And that, sadly, was it for us. I believe Wrthless and Twin Heart put on excellent sets and it’s particularly galling to have missed the latter’s last Inverness show before they call it a day. Credit is due to Earth-616 Promotions for putting together a very fine line-up of music and thinking of ways to mix up the creative arts.

My only critique (as it was last year) is that the visual artists don’t really get a fair crack of the whip due to poor lighting. However, I believe the festival has real potential and this could well be the start of a very good thing indeed.