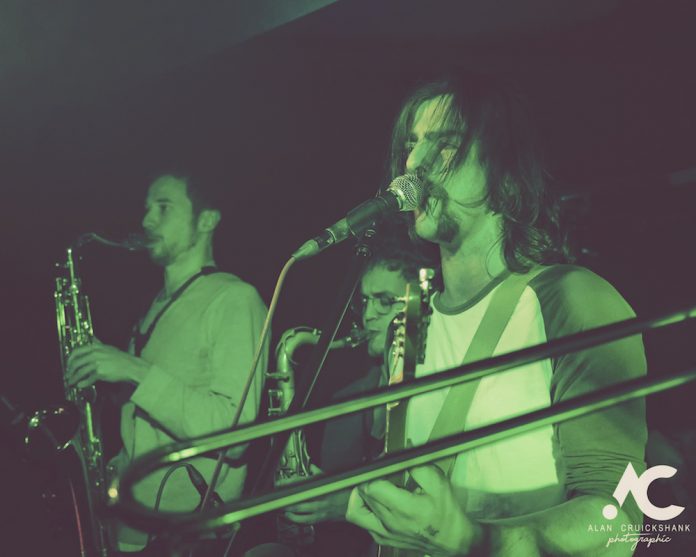 Tom McGuire and the Brassholes , with support from Coca Tenorio, at Tooth & Claw, Inverness.

The Tooth and Claw regularly books eclectic and interesting musicians to come to the area and rub some elbows with the locals. As soon as you walk into the place you get an immediate waft of classic rock. Name a musician your dad likes and it’s a guarantee that their face is on the wall. Also, Slipknot. It’s complicated.

This bizarre contrast seemed to fit the mood of the night, as the opening show was done by an Ecuadorian woman called Coca Tenorio on the guitar, pouring it out  with a range of haunting and happy bardic folk songs.

By about half past nine, with their debut album releasing in January next year, Tom McGuire and the Brassholes began their set. These guys were all over the place, in the best way possible. Tom said in interview that the band had all started out in Glasgow’s Buchanan Street as buskers, before deciding to collaborate and bring us a powerhouse funk octopiece who make their bread and butter with saxophone riffs and jazz influences.

More photos of the evening
HERE

Tom himself is a confident frontman, able to really play up and off the crowd during more personal songs such as “Get Out”, but other members still shone. Trombonist Liam performed some very bombastic brass solos of his own during the more instrumental tunes.

Overall the group really mixes in influences with country and metal and the brass and keyboard from seventies daytime show intro themes plus vocals very reminiscent of the soul greats such as James Brown and Stevie Wonder. The raw mix of genres makes these guys well worth checking out.

The energy and fun that Tom (not Lemmy) McGuire and his Brassholes brought to this gem of a small-town tavern was carried on throughout their set. The group kept the crowd on their toes, igniting with instant classics like their blowout hit “Ric Flair” as well as tossing out really great power ballads to make for a really great night.