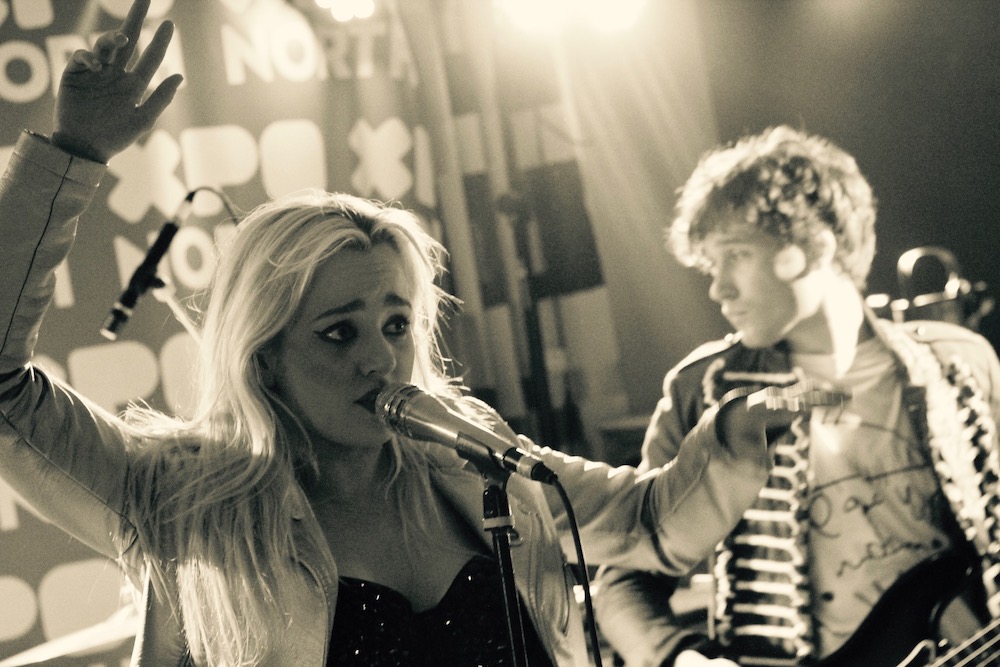 We look at Fat Goth, LILURA, Static Union and more, at XpoNorth 2017, Inverness.

With the day job keeping me away from the day events I joined the crowds for the evening showcases which bring life to Inverness in venues untouched by live music throughout the year as well as the established venues among gig goers. The evening warmth allowed a brief opportunity to look over the array of talent in the XpoNorth brochure in the setting of a non-XpoNorth venue, the Secret Garden of the Black Isle Bar. As with most plans that I’ve made in the past with XpoNorth, and its predecessor, they tend to go awry after the first act either due to an inspired move off the planned track or a tip of a band to watch out for in one of the venues.

This year I kicked off at Mad Hatters where a youthful Wayne Rooney lookalike was leading Static Union. Driven guitars, focussed vocals and air of Joy Division guitar and early Cure pervaded their set early. Melodic throughout but with a little touch of brooding menace, the set ended frenetically but controlled. A solid start to my evening and a band I would want to hear again.

With large numbers in some venues it paid dividends to get there early. This was the case with Emme Woods in Blackfriars with the crowd spilling out the door. And so the planned path now changed.

Across the road, in the Phoenix, Edinburgh’s Vistas were starting in 15 minutes and gave the opportunity to reappraise our acts to see. Vistas were in buoyant mood with a set that bounced along. Energy bundled up with jaunty guitars and a sweaty swagger. At XpoNorth you’re never far away from a decent act.

Next move was to Scotch ‘n’ Rye and the enigmatic Lilura in what was only her second outing. Many will know LILURA as Jemma Tweedie who was more noted for her singer songwriter appearances with acoustic guitar. This is a major sea change and a healthy crowd had gathered out of more than just curiosity. The guitar may be cast aside but brought in are electronic beats and a strong drums accompaniment. The result is a strong, both visually and aurally, and is more of a performance than a gig. The music wraps around Jemma and creates an intensity and atmosphere which is somewhat beguiling. The focus on the visual aspect leaves the music almost secondary, but this is quite simply a good reason to follow the progress of Lilura. This isn’t Jemma Tweedie. This is LILURA. I think we might have found something here.

Thursday night saw Carma take the floor at Penta Hotel. There is a feel of whimsy and light touch to their set. Those acquaint with Leddra Chapman will know that feel. Carma have a breezy, effortless air to their tunes with well honed harmonies combining well with ukulele and keyboard. Last song ‘Happy Ending’ sums up their sunny disposition and pleasing set.

Across the road in the Phoenix, Glasgow’s 100 Fables were tuning up. Their first visit to play Inverness and they made it an impressive one. One hundred miles an hour from the off, it was hard to keep up with the fizz of lead singer Lyndsey Liora who threw herself into this set with abandon. No brooding pretentiousness here, this was a full blown, old school, slightly unhinged (in a good way) uninhibited performance. 80s pop rock influences with an early Paramore delivery. Their punchy take on Talking Heads’ Psycho Killer was strong crowd pleaser. Half an hour of non-stop bouncy pop rock. Great stuff. Great energy too.

Meanwhile Fat Goth were taking to the stage in the Tooth and Claw in front of a filling up bar. I’ve seen Fat Goth a couple of times before, most notably in the Market Bar, and tonight the volume didn’t appear to do them full justice. The grit, the sweat and the heavy delivery were still there as was their ability to impose a set on a crowd. They do that by the shovelful and take it back in return. One of Dundee’s finest, just let them off the leash and ramp it up.

XpoNorth once again proved that Inverness can come alive midweek and welcome the creative industries to Inverness. The atmosphere is always positive and makes it one of the most looked forward to events of the year.