A review and interview of Megan Blyth playing as part of the Old Grey Thistle Test at hmv, Inverness on Thursday the 23rd of May. 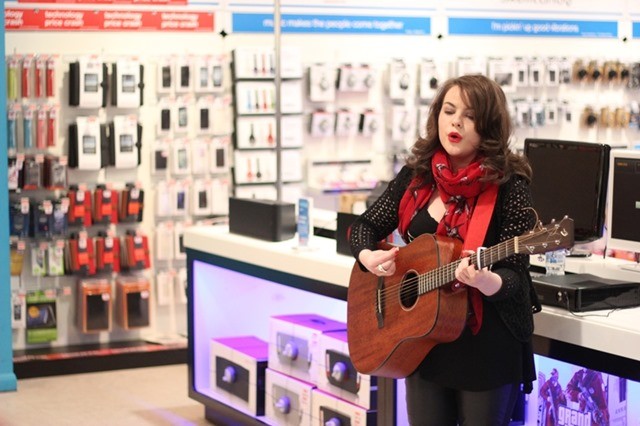 Megan was fresh from a support slot at the Ironworks on Wednesday night with Rachel Sermanni, and gave us a selection from her first EP, which she promoted once or twice, her new EP to be released soon, Devil’s Own, and to kick us off a White Stripes cover, The Denial Twist.

There is a real spring in Megan’s step as she took us through this short but mixed set, although her enthusiasm was a little dented by her lack of amplification, but the mindful shoppers gave her their attentive ears. The introduction of the new songs, Ashes and Anna gave us an insight into the direction in which Megan is moving. These songs are atmospheric, and if anything enhanced by the fact they were played unplugged. There is a definite darkness encompassing her music, but this is a darkness that you can draw comfort from.

Megan, ended her set with A Million Miles. This has been a mainstay of her sets over the years and still feels that it has its place, not forgetting where she started from. 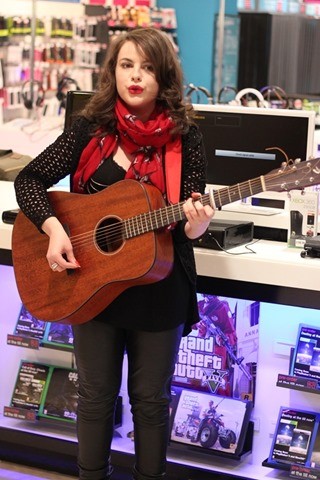 I caught up with Megan after her set to find out a little more of what’s been happening, especially in relation to her forthcoming EP which Megan is clearly excited about.

“I’m recording at Chem 19. I’ve won funding to record there for a few days, and they’ve been good to me. They’ve put up with a lot with me changing dates, but I finally got it recorded!”

Magan elaborates on one of the tracks on the EP, Anna, which she hinted at during her set was meant to be played with a piano, but sounded okay with a guitar.

“Jamie, the sound engineer at Chem 19, he actually plays an instrument called a dulcimer, on my song Anna, with a piano which is nice, and the dulcimer on top of it.”

Megan played two of the songs on her EP from her EP tonight, Anna and also Ashes, but omitted the title track, Devil’s Own, for a couple of reasons.

“I played it last night (as support to Rachel Sermanni) and I was kind of struggling as it’s quiet and I needed to bring a mic and amp next time. I was struggling to get my voice heard.”

With the Rachel Sermanni gig still fresh in Megan’s mind she was still enthusing about the night.

“That was amazing. It was the best sound that I’ve ever had. The Ironworks are ace for sound. I was really nervous, but  I think it went okay, and it was a great gig, really successful.”

Tonight’s set saw a change in Megan’s direction, and she was keen to expand on this.

If you want to hear more from Megan, with a little amplification, then she will be playing next at the Eagle on Saturday 22nd June. You can check other up and coming dates on Megan Blyth’s Facebook page.