Charlie Roth has been referred to as “a genuine American troubadour” who  draws on Americana, Folk, Blues, Country and Celtic genres. Americana UK observe “He has an honesty to his voice, a been-there, lived-it nous that lends his tales credibility and raises his music up a notch or three” We managed to speak to Charlie Roth prior to his appearance at the the Northern roots festival 2013. 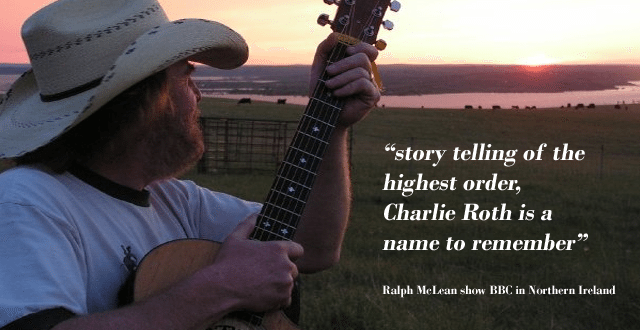 You obviously have great kinship to the area, how are you feeling about your return to Scotland this time round?

I think a lot of Americans feel when they visit the place where their gene pool developed that they have a strong sense of returning home. On my first visit to the highlands back when ‘Broken Ground’ came out in 2010, I was so overwhelmed by the beauty of the place I guess you can say I fell in Love.

I have made good friends in Scotland so it is even better now. I really enjoy the Scottish sense of humor, (yes I know for you that is spelled wrong), only in Scotland you can be called a horrible name (like the sort you can’t print here) and it would be a term of endearment. In Minnesota when you tease someone we call that “giving them crap”, in Scotland it is called “taking the mech out of them”, from my perspective this has been raised to the level of an art form there.

What do you look for when you are wanting to listen to music and what music are you currently listening to?

I am always looking for the real deal. I enjoy instrumental music for certain occasions but I am always more attracted lyrics and a strong melody. When I was younger I played so much John Prine that I think I absorbed him, some one proclaimed, “Charlie was pickled in Prine”. I also absorbed Jessie Winchester and all the Texas guys like Jerry Jeff, Guy Clark, Townes, and Waylon. I come from Minnesota but I have been called a Texas writer by one DJ, Eddie White, in Australia because as he said “Texas music can come from anywhere even from Minnesota, it is an attitude” and he uses me as an example of that. I have never stopped discovering new music that excites me.

Lately I have been digging John Fullbright and I have met him a few times now. Matt Harlan and I are good friends and wrote ‘Daffodil’ together which ended up on Tartan Cactus Heart. Slaid Cleaves and Ray Bonneville are among my favorites (yes I know that for you that is spelled wrong). On ‘Broken Ground’ I covered ‘Long Haul’ by Effron White (Fayetteville Arkansas) and ‘Diana Jones’ by Jonathan Byrd (Carrboro North Carolina) both of those guys are dear friends and also could be considered Texas wordsmiths in my book. We are connected by the Kerrville Folk Festival in Texas, a sort of tribal gathering of storytelling songwriters. This year I will miss it because of this tour.

Your songs are well known for their strong narratives how do you go about creating new material?

I look at real life and also make up some characters and situations. I am kind of schizophrenic as a writer, because I have made my living playing all genres of music (blues, country, folk, rock, and Celtic being the main ones) I write for and from all those genres. Celtic music has been a recent discovery since I joined a band called Ring of Kerry I have immersed myself in that music to become the guitarist that they needed me to be. I noticed strait away that the storytelling traditions of Scotland and Ireland are much the same as in Texas.

I am particularly fond of Dick Gaugen and Liam Clancy. In that band I do ‘Both Sides the Tweed’ ‘The Parting Glass’, ‘Fields of Athenry’ and many others. I think that knowing hundreds of cover songs has helped me as a songwriter because lets face it there is so much you can steal, and also has been the main reason that I don’t have a day job.

In your biography on your Facebook profile, and reiterated in gig reviews, is the element of “A consummate showman, [and] an entertainer”, what advice would you give to someone wanting to build that presence? 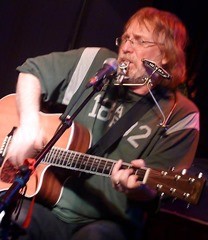 You can’t take yourself too serious when you still play clubs for most of your living and you shouldn’t even if you only play concerts. People like to laugh and have a good time. Learn some funny songs to balance out the sad ones. It matters not to me when I become musical wallpaper as long as the check clears. I get plenty of opportunities to play in listening rooms but unfortunately they are a small percentage of the gigs I do. I try to have a good time all the time in spite of what particular situation I find myself in. If no one is listening there is still plenty of joy in just playing my guitar and singing hopefully from the heart.

I would tell any one that you must develop a suit of armor, (yes I know that to Y’all that is spelled wrong), to survive in this business. I refuse to let the crowd dictate what kind of night I have. It has taken me years to develop this kind of confidence and people notice that and perhaps they will start listening to my lyrics because they are attracted to that confidence. It helps to know some covers, which will get them involved. It is always good if you can take some requests. I try to stay away from songs that I am tired of or ones that I can’t deliver very well because your mood will go to hell in a hurry then. I sometimes have said, “Once you learn not to give a flying F#@& then you got it”. That being said I have several albums out now and more and more people are starting to come out to the shows and requesting songs I have written. This has also taken me years of hard work, mostly as a dance bandleader, to make that happen. I enjoy my work and really have no other sellable skills.

I love the cover for your last CD, Tartan Cactus Heart, how has the response been to the album and what are your plans for an eight album?

That cover was designed by and is a photograph by my friend Danny Schmidt, another great songwriter I met around the campfire in Texas. Danny stays in our guest room on our farm when he is passing through Minnesota. He has made quite a name for himself since he first stayed with us and is a perfect example of someone who has the talent and has worked really hard to earn the kind of respect he now enjoys. I have never been able to just take off and live in my car for the years it took to get to that place as a songwriter. I enjoy being home too much. This tour coming up is 20 days out and that is the longest I have been away.

My wife Bev runs a horse boarding business and I am kind of the inept maintenance man around there. I will miss her quite a bit when I am over in your beautiful country. The album has had a four star review in Maverick and has received much airplay. The first spin I received on BBC was for my take on ‘Wild Mountain Thyme’ which I remember playing at the Belladrum Festival after just developing that version. I had a hard time keeping it together because as I looked out to the crowd of Scots they had tears in their eyes. I knew that I was making a connection; it was my love song to them and for their country. I can’t wait to play at the Northern Roots Festival with Matt Morrow on guitar again. And the heather will be in the hills. Ah will ye go lassie go.

I have written three new songs and went into the studio and recorded them right before Christmas so I have started the project. But this tour has taken much of my time to prepare for and I won’t be getting back to recording till after the summer is over. I am considering some songs to record with my band ‘The Honkytonk Healers’ that would result in more of an old school country album.

Charlie is playing  The Acoustic Bothy stage at Bogbain Farm on Saturday the 1st of June between 3-5pm. He will also be special guest of Roots and Cheroots with The Slim Panatellas on Wednesday the  29th of May at The Eagle Bar.

Read more about the Northern Roots Festival and keep track of Charlie Roth through Facebook.