A review of Public Service Broadcasting at The Ironworks, Inverness on the 2nd of May 2013.

Starting off tonight was Dounreay Beach Party, local DJ mashing up some electronica and IDM which sounded fabulous through the sound system. However, the combination of playing in the dark and not doing much other than nodding his head meant it wasn’t a visual spectacle, but great sounds.

Tonight’s main event was Public Service Broadcasting who are out on a UK tour in support of their debut album. The popularity of their  EP “The War Room”, which has sold in excess of 13,000 copies, shows the  real appetite for their work. As does their recent announcement that they would be playing on the same bill as The Rolling Stones in Hyde Park. 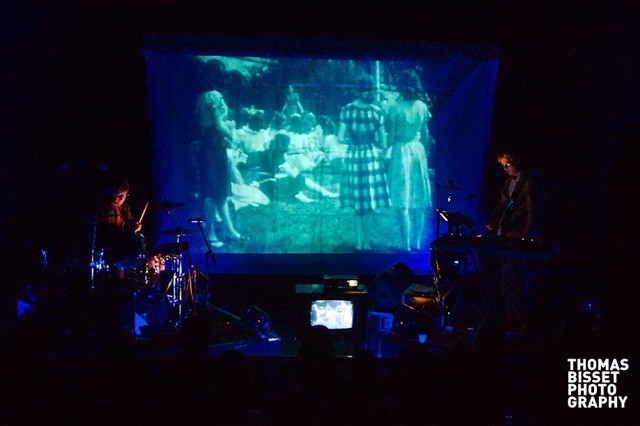 So what is Public Service Broadcasting? J Willgoose Esq, replete in dapper corduroy and bow tie, with his drumming companion Wrigglesworth are a London based duo who show archive black and white footage, propaganda and public service broadcasts (geddit?) on a large screen while setting them to music. If this seems like a novel but ultimately limited source of material, then prepare for a surprise. On show tonight were tracks from The War Room and from their new CD – Inform – Educate – Entertain. Not really one for being either informed or educated, I was slightly hoping that there would be more of the latter and that there was. 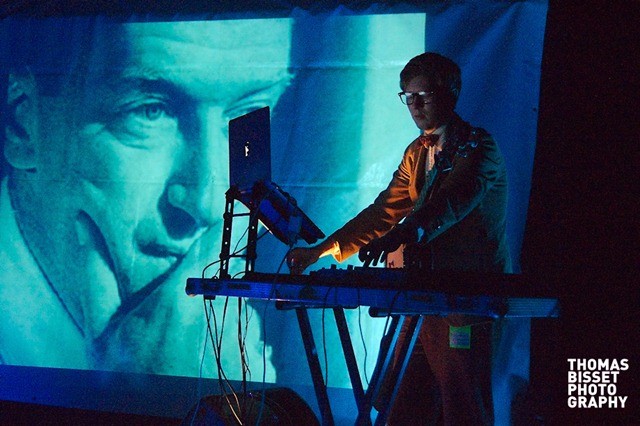 Loops of drums, electronic sounds and keyboards are layered with guitar and strangely even a banjo into a hypnotic backdrop to the footage. The 75 minute show had even had some humour from a text-to-speech voice telling us that they had always wanted to play in Inverness – a sentence that only a robot could get away with.

Memories of their blinding set at Loopallu 2012 perhaps helped to bring a decent crowd to the Ironworks tonight and they were treated to a powerhouse performances of “London can take it” a remixed “New dimension of Sound” and “ROYGBIV” as well as show closer “Everest” even if there was some fumbling of the keyboard section.

With the video footage taking such a prominent role in the show there is a question of how their work translates to a CD without this visual backdrop, however the rave reviews from the likes of Art Rocker and Mojo indicate that they not only match but exceed expectation . The CD is released on 6 May.

Over the next three nights (Friday – Sunday) PSB are continuing their UK tour in Stornoway, making a return to Ullapool and finally down to Aviemore. They are well worth a look.

Keep up to date with the band via the Public Service Broadcasting Face book page.