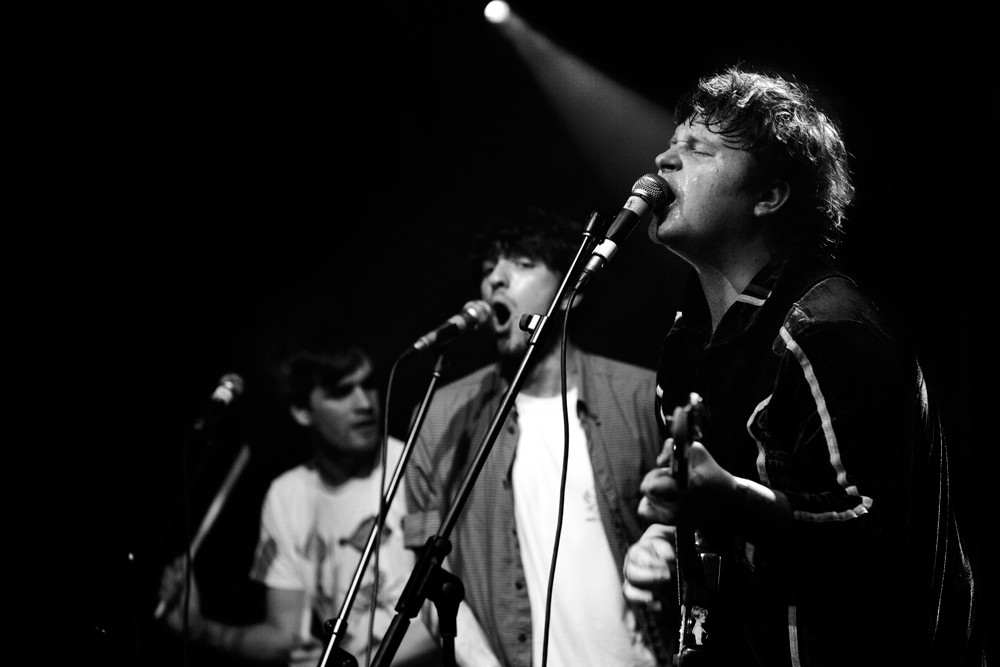 A review of Dingus Khan and support at Mad Hatters, Inverness on the 26th of April, 2013.

I had originally only gone out to have a couple of beers but the acts left such an impression that I couldn’t help reaching for the notebook and putting a few words together for this one.

The night started off with The Last September an indie folk group from Edinburgh. Personally speaking they didn’t make much of an impact and I found many of the songs in their set seemed to blend into each other. That said, they seem to have a loyal following and there were plenty of heads nodding along in appreciation.

The Broken Ravens were on stage next and quickly woke up any punters in danger of nodding off into their pint glasses by ripping into a solid chunk of rock riffage that the likes of Queens of The Stone Age would be proud of. The four-piece from Stornoway sounded tight and tracks like ‘This Shit Won’t Burn’ is an indication of their uncompromising take no prisoners attitude. Kevin Clark’s brutal drumming propelled the band along and he’s got to be one of the best drummers I’ve seen in many years. I managed to grab a quick word with Kevin and guitarist Calum Macaulay afterwards and was surprised to hear that they’d only being playing together for a year. They certainly sounded like they’d been playing together for much longer.

They’ll be back later this year as part of the goNORTH fest and if you like your rock noisy and dirty then these guys are a ‘must-see’. New track ‘Pretend’ also features on the new NY2SY album to raise money for Niall Iain Macdonald’s Atlantic Rowing expedition.

Next on we had the headliners Dingus Khan, I have to profess that I wasn’t too familiar with them, however I had been reliably informed that they’d blow my socks off if they played anything like their previous performances in Inverness and Stornoway.

Arriving on stage in white boiler suits, accompanied by an inflatable swan and looking like extras from One Flew Over the Cuckoo’s Nest, they cranked out a discordant version of ‘Mull of Kintyre’ before lead singer and guitarist Ben Brown introduced the band as ‘we’re Dingus Khan and we’re from Essex’. Three drummers, two bassists, a bonkers guitar wielding singer and an electric ukulele all combined to make a wildly erratic racket that worked surprisingly well. A summation from one punter was; ‘it’s like a bunch of kids with ADHD who’ve been let loose on the school’s music department’ and it’s one I think I agree with! Their energetic performance was hard not to like and even those that initially seemed cynical were soon smiling and nodding along.

The good thing about the Mad Hatters stage is that there really is no barrier between band and punters and lead singer Ben had a habit of picking you out looking you right in the eyes and singing at you with a slightly disconcerting smile on his face. Particular highlight was ‘Knifey Spooney’ with the singalong chorus ‘Well I couldn’t find a knife so I had to use a spoon/and I tell you that a spoon ain’t the best thing’, catchy and slightly disturbing in equal measure! Couple that with a man in what looked like a terry towel dress breakdancing on the floor (Ben again) and it all made for chaotic, noisy nonsense.

Whilst this is the second gig that they have played in Inverness over a short period, hopefully it won’t be too long before they return once again.

You can read our last interview with Dingus Khan.