Dingus Khan the eight piece from Manningtree who mix charm with a raw rock and roll edge, answer some questions prior to their gig at Mad Hatters, Inverness on The band are returning to Inverness on the 26th of April 2013. 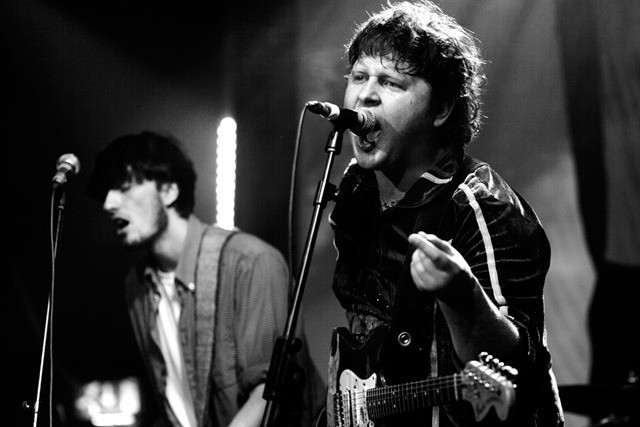 3 bass players, 3 drummers, an electric ukulele player and a singer (have I missed any one), how did the band originate?

Nope, that’s all of us. It started off 2 or 3 years ago with just Ben (vocals and guitar) and Nick (drums) with nothing else to do but take Ben’s songs and play them as loud as possible. Since then it’s just got bigger and bigger to the point where most of the people we know now get to play those songs as loud and as hard as possible. It wasn’t a conscious decision to form an 8 -piece rock bastard, but in hindsight maybe it should have been.

The reviews from your gigs give the clear impression of orchestrated madness, where does the method in the madness come from?

The method comes from some thought and the odd band practice although I’m not sure if method is the right word. The madness is kind of inevitable because with 8 of us on the kind of stages people let us play on, it’s usually a bit of a squeeze. Perhaps less madness and more like jostling for space. Think of it like a 93rd minute corner in a pretty important game. Even the goalie is up there, trying to score an overhead kick.

You guys have been pretty flat out recently what are the highlights of your year so far?

It has been a pretty amazing year, having a real, tangible seven inch single out on a record label we’ve all known and respected for years was pretty exciting, in the same way that seeing our album finished was. Recording a BBC6 session at Maida Vale studios was unbelievable and as for gigs the highlights have to be Latitude and Reading festival, as well as a couple of brilliant gigs at home in between.

How are you feeling about the response to your debut album, got any favourite reviews of it yet?

The fact that we have a debut album out is pretty special. We’ve only had a few reviews in so far but they’ve all been really nice and genuine too. You get the impression that the reviewer actually took the time and listened to all the tracks a few times which we really appreciate as a lot of music writing is beginning to lack that authenticity.

Most of the oozing we do is a bit worrying and probably not particularly rock and roll, but I guess that’s for the courts to decide. Josh has some pretty bad allergies, though it would be cruel to class those as habits.

How are you feeling about coming up to Inverness and even further north?

It’s probably the section of the tour we’re most excited about. We’ve never gigged further north than Leeds before and even that was a bit of a stretch so we’re keen to see what it’s like the further up we get. Also Gaz, one of our drummers is planning to take all of his clothes off and search for Nessie. I’m not sure if he’s aware of how many people have tried that before but it’ll definitely be worth a look.

Dingus Kahn return to Mad Hatters, Inverness on the 26th of April 2013