A review of Dave ‘Bucket’ Colwell & Friends at Mad Hatters, Inverness on the 8th of March. 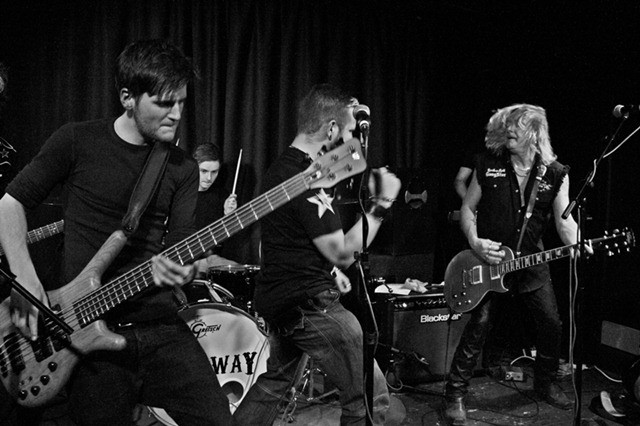 This is a gig that’s been pencilled in in the diary for sometime. In their day, Bad Company were one of the biggest bands in the planet, and even if Dave’s tenure in the band was in later years, he had the privilege of playing with all the original members at one time or other including iconic front man Paul Rodgers.

All this contributed to a set filled with Bad Company and Free classics as well as some of Coldwell’s own solo opus ‘Guitars, Beers and Tears’.

The ‘Friends’ part of the band were made up of our very own Ross and Ryan McEwan (Ross is to be credited for his tireless work and enthusiasm in pulling this tour together) with their ROADWAY compatriots Iain Macleod on bass and Dougie Greig on vocals (who held up very well to the vocal gauntlet that had been thrown down to him tonight (singing Paul Rodgers numbers)). On keyboards was Mark Hunter.

Mad Hatters filled up with punters eager to catch a glimpse of the guitarist associated with rock royalty (he also jammed with Brian May last year) although leaving the main door open allowing an artic breeze to flow through the venue prevented the natural heat from the stage warm the place up (jackets were firmly zipped up!).

Proceedings were kicked off with ‘Deal with the Preacher’ from 1975 album ‘Straight Shooter’ followed by ‘Rock Steady’. The gig bounced along nicely but seemed to step up a gear on the classic ‘Feel Like Makin’ Love’.

While Ross mainly took a step back on guitar duties letting Colwell lead the show, he in turn let Ross and the boys have their own little moment while he played along with them on ROADWAY track ‘Midnight Dance’.

The only moment of the gig where I felt an ‘Anorak moment’ come over me was on Dave’s own track ‘Reach Out’. “There are two versions of this,” said singer Dougie. “Dave’s solo album and Iron Maiden, but we’ll go for the one without Bruce Dickinson.” he continued. Dougie, I apologise in advance for being an Anorak, but it was actually guitarist Adrian Smith who sang it on record for Maiden. The song more recently has been adopted as the official anthem of the SADS Foundation (Colwell has been an ambassador for the Foundation, which is dedicated to preventing deaths among children and adults due to Sudden Arrhythmia Death Syndrome (SADS).).

The gig finished in a series of explosive hits one after the other. ‘Wishing Well’, ‘Bad Company’, ‘Can’t Get Enough’ and all rounded off with Free anthem ‘All Right Now’.

For their short time together they are as tight as a badgers nether region and to their credit, they make what is a collection of classic tracks their own. I would highly recommend seeing them on this tour if you can.

You can read an interview with Dave ‘Bucket’ Colwell. Further photos are on the Inverness Gigs Facebook page.