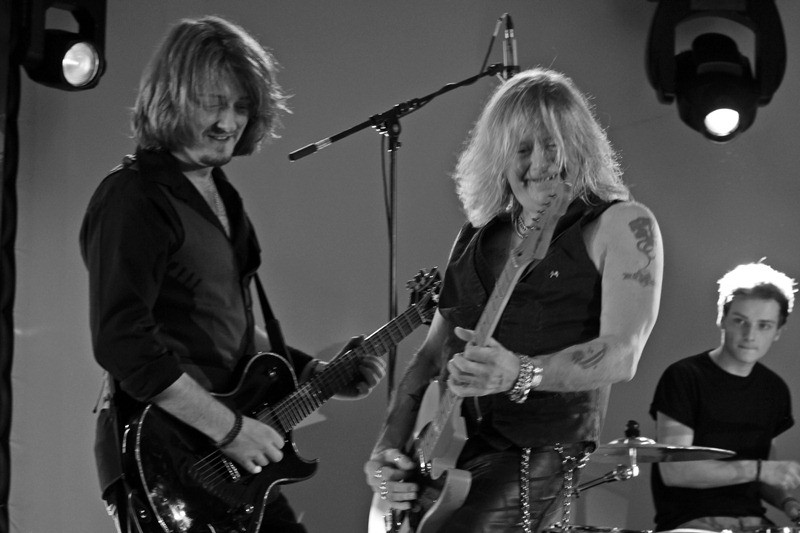 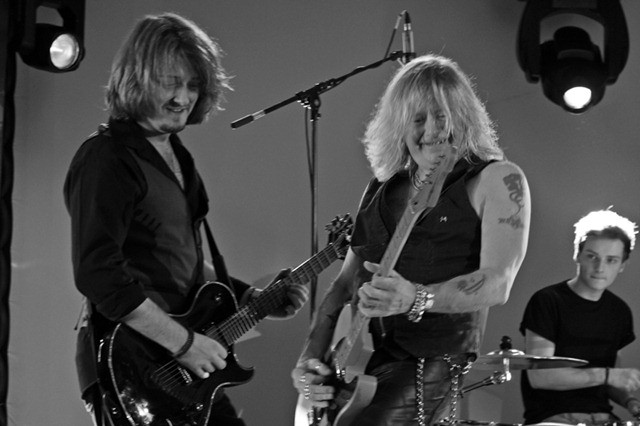 Dave ‘Bucket’ Colwell is one of those musicians that have glided along just under the ‘Celebrity status’ radar. A man full of massive achievements who has played alongside some of the biggest names in rock music, but unless you’re a huge fan of one of the bands he has been associated with as a player or writer, (the list reads like a who’s who of Rock, Bad Company, Iron Maiden, Kenney Jones (Faces/The Who), Samson, FM among many) you may be forgiven for overlooking him on some of your own record collections, and missing out on one of rocks true hidden gems both as a guitarist and a person.

Local musician Ross McEwen who has earned respect from some huge names in the music world himself, and some of his band mates from ‘ROADWAY’ have the privilege of being Mr. Colwells band on this current tour.

Dave started guitar from a very young age and had already formed his first band by the age of eleven. He grew up in a London community with many musician friends who went out and made their own mark on the world including Iron Maiden guitarist Adrian Smith.“Adrian & I have been good friends for a long time. We met when we were in pub bands playing the same circuit. He was in URCHIN, while I played in ANGEL STREET.” Explained Dave. 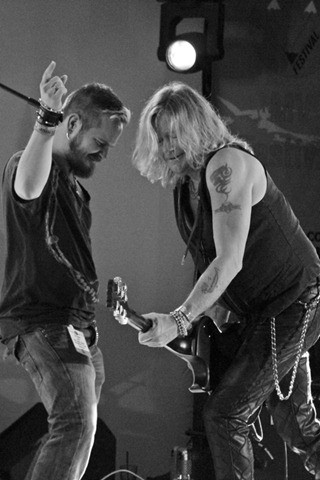 In the mid 1980’s Adrian and Dave formed a side project called ‘The Entire Population of Hackney’ which also featured Maiden drummer Nicko McBrain. A song written for that band was ‘Reach Out’ which would end up as an Iron Maiden ‘B’ side sang by Adrian Smith. Many of the numbers written during that time would end up on the pairs next project together ‘ASAP’ (Adrian Smith and Project) in 1989 for the album ‘Silver and Gold’.

Another gig that Dave landed in the mid 80’s was as a second guitarist to Mick Ralphs of Mott the Hoople/Bad Company fame in his solo band. This gig would lead to the reformed Bad Company gig at the end of the 1980s and a long association of nearly 15 years with the band who undeniably are one of the most successful and lasting rock bands of our time, with a total of 55 million records sold worldwide. 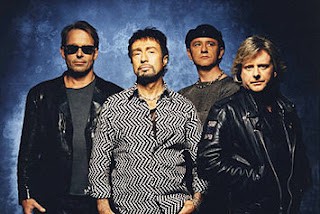 Starting off with playing on the world tour to promote the band’s ‘Holy Water’ album which went on to sell over a million copies, and then writing on the commercially successful ‘Here Comes Trouble’ album with singer Brian Howe, followed by two albums with third singer Robert Hart, he would go on to play with various line-ups including original vocalist Paul Rogers. “I prefer Paul’s voice personally and it was a big thrill when he returned to the band in 2000.” Said Dave.

These days he is still kept busy with various projects, a more common practice these days where we see musicians diversify by playing with many bands. Apart from Dave’s own solo material he plays in THE JONES GANG along with Kenney Jones (The Who/Faces), Rick Wills (Roxy Music/Foreigner), Jim Stapely and THE RICK & BUCKERS with Rick Wills, Harry James (Thunder) & Ronan Kavanagh.

In a career that has seen him tour the world with some of the biggest names in music and play prestigious venues like the Albert Hall, and touring America with the likes of Bon Jovi, Lynyrd Skynyrd, Foreigner, and many many more, Dave ‘Bucket’ Colwell is no where near finished yet.

“Well I intend to keep on making music and touring. It’s the best job in the world and despite some setbacks, It’s the only thing I’ll ever do. Bucket and Co. is essentially a new act, so it is starting again in many respects so I just want to get it out there, raise the profile and do bigger shows. I’m very much enjoying my tour with ROADWAY, which has just started. A great bunch of guys, fab players & tons of enthusiasm”.

If you want to hear some Bad Company, Free and other massive rock classics, catch Dave and the band on tour throughout Scotland and at ‘Madhatters’ on Friday 8th March.

You can see our last interview with Ross McEwen.