A review of Josephine Sillars, Emma Mitchell and Jemma Tweedie playing The Eagle,Inverness on  Friday the 18th of  January.

With four acts set to play we were saddened to hear that Sara Bills had to pull out due to illness, and of the three remaining acts two were at less than full health, so it was a case of the walking wounded taking to the stage, or as first act, ubergeek Josephine Sillars would no doubt have put it, The Walking Dead.

Josephine Sillars is quite a character, with her flowing banter between songs, including giving us a bit of background to her opener “Better Men”, and even more about her geeky research into her, now signature tune according to an equally self-confessed geek in the crowd, “17 Hours”. Josephine is also quite a trooper, as it was clear that she wasn’t in the best of health, and, as I would remind Josephine, it just takes one person to fall ill and who knows, we could be on the verge of a zombie apocalypse. Moving on, “Middle Class Pretenders” gave us an insight into Josephine when she briefly gave us a few bars of what the song originally sounded like, before giving us the updated version. It was more in your face, a bit like Josephine really, but in a good way.

Josephine’s humour spills over from her banter and into her songs, making her one of the most engaging young acts around and there is more than a nod to Tim Minchin in her delivery. Sticking in a seamless link to a Bob Dylan cover, Josephine then takes us to the war graves of Europe showing us that she has a more reflective side. The set then swept to a conclusion with “Hurricane”, which in many ways sums up young Josephine. 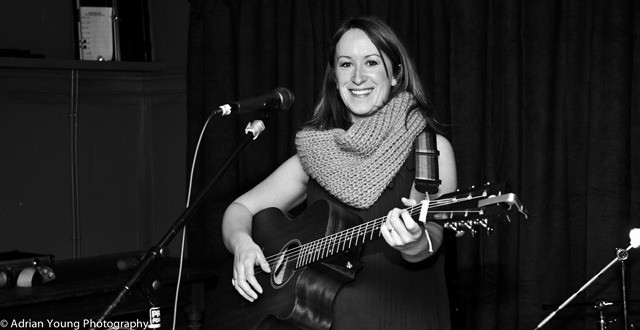 Second act on was Emma Mitchell, but not before the first half of a Women’s Aid quiz, which led us not to specific right and wrong answers but, in this case appropriately to the use of keywords in the answers, delivered with good measure by host, Graeme Gilchrist. Opener, Kings of Leon’s “Use Somebody” wrong-footed us as Emma used her slot to play a set predominantly of more upbeat covers than her self-penned works which are more considered in their delivery.However, her selection gave Emma an opportunity to use the full range of her vocal. The choice of covers were very clever, not just crowd pleasers but firmly placed within Emma’s range, that being in the form of Rihanna’s “We Found Love”, through the U2 standard “With or Without You” to The Cranberries “Zombie”. A stutter in the middle of The Scissor Sisters’ “Take Your Mama” didn’t take the gloss of Emma’s performance. Although Emma felt a little hoarse (yes, that did lead to topical jokes from the floor) but her medication did the trick. Vodka and coke I believe.

However, it wasn’t just those covers, her own compositions including “Lost”, quiet but not lost on the audience, I Know and the rousing “Wild Cavemen” were well received. We even had the opportunity to hear a new song, Tellin’ Story. Emma knows her audience and adapts sets to the each setting, so much so she doesn’t run with a set list but a folder! Emma’s quality lies in the blend between her song writing and its fusion with her voice. The capability of her song writing is more than matched by the range in her voice. 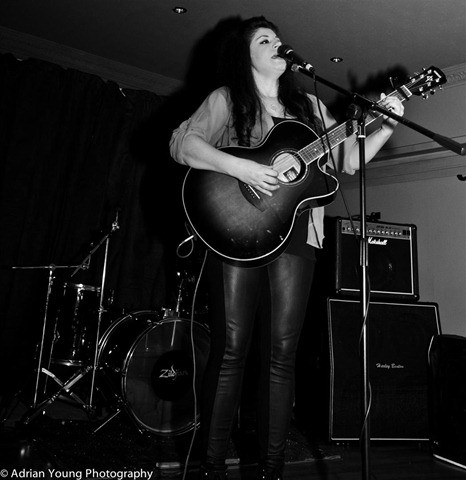 Final act of the night, after the second part of the quiz, was Nairn’s Jemma Tweedie. Unlike Josephine and Emma, this is the first time that I have heard Jemma, and I was mostly drawn by the smoky dryness of her vocal; a real old school jazz club feel. Again, a youthful performer who was relaxed within her own ability, and equally at ease as she moved through the instrumental interludes of her songs. “Draw The Line”, “You and I”, “Paper Doll” all had her mark branded on them. She even has a song about her hometown, the less than complimentary titled,” Drunken Coastal Town”. There was even time to stick in a cover at the end with her mesmerising take on “Smells Like Teen Spirit”.

Jemma’s style crosses over into warm country and heartfelt blues and belies a label but is equally accessible. Jemma is not a clone of many of the acts we hear on the national stage which will put her in good stead for the future. This may have been the first that I heard of Jemma, but it certainly won’t be the last.

So Jemma rounded off a fine evening, not just of the girls showing us what they can do, but judging by the pieces of paper going in the collection cans a sizeable sum was raised for a worthy cause.

Many thanks to Adrian Young Photography for the photos