A review of Glasvegas with The Amazing Snakeheads and KOBI at the Ironworks, Inverness on Wednesday 5th of December 2012. 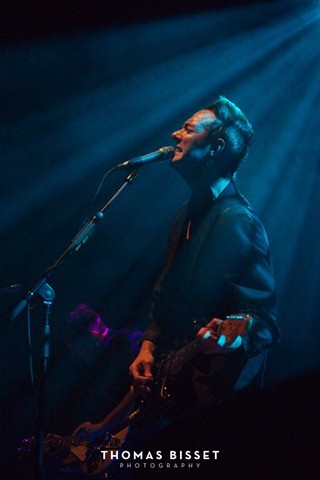 The bitterly cold night saw the crowds trickle in slowly and local band KOBI – who create music with plenty space to breathe – had tokick off proceedings early doors to the open spaces of the Ironworks. From these quiet beginnings the volume was quickly ramped up, as the band brought us through a number of familiar tracks such as “A New Before” and “Fight”, a song about “heaven and fluffy clouds”, although a couple of voices from the floor had a more simplistic belief that it was really just about fighting. 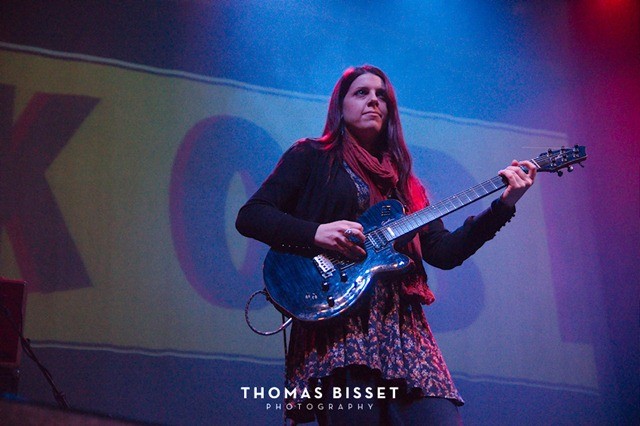 KOBI have, to their credit, become chameleon-like in the make-up of their sets. At a recent gig they added some horn arrangements and made spectacular use of the extra dimension that it gave them. Tonight, it was the four of them forming a front line but with an edgier set, with a bit more bite, and more fitting of this occasion. 2012 was good to KOBI. 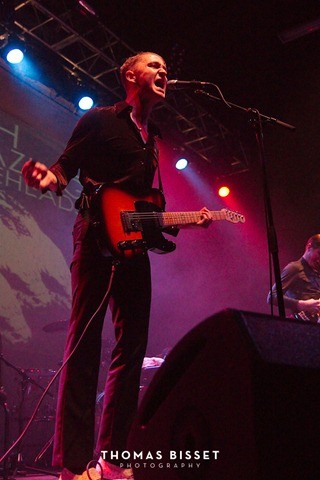 They were followed by Glasgow’s The Amazing Snakeheads. Some bands are easy to pigeonhole, The Amazing Snakeheads are not one of them. A performance led with the anger of vocalist and emotional fireball Dale they parade their way through the opening numbers with very little pause for acclaim or breath. At times it is an elaborate piece of theatre, knocking down the barriers of conformity, in a set which no doubt is entirely planned but gives a vicious air of improvisation. This is raw, and if labelled it can be best filed under “fucking angry”.

It appeared to be inevitable as time ticked on that the appearance of Glasvegas would coincide with the final whistle in Celtic’s final group match in the Champion’s League. This was more or less confirmed later when the result was acknowledged as pleasing Celtic fan James, from Rangers fan Rab! 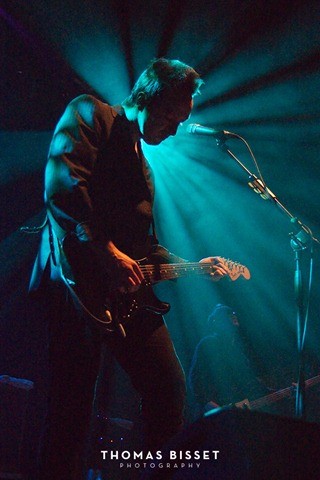 When Glasvegas did stride onto the stage they were all dressed in black. The ubiquitous shades were now gone opening James Allan up to his audience. Jonna, the paragon of cool, standing behind the drum kit being the only member with eyes covered. From the opening Heartbreak of “Euphoria Take My Hand” it was obvious from the hairs standing up on the back of my neck that this had the making of a night to remember. Leading on into “The World Is Yours” it was clear that their was a sea change in the Glasvegas make up. All too often (well locally anyway) James has been viewed as aloof and pretentious and at times distant from his audience. Tonight he was, without those sunglasses to hide behind, a real person letting the fragility, and strength, come through in the songs.

The set moved lyrically between the emotional highs and lows of the first two albums and introduced us to some new material from their forthcoming release “Later…When The TV Turns To Static”. New material that built on the strengths, that lay within the second album, an album that never really caught the imagination of the debut. Crowd pleasers such as “Geraldine”, “Flowers and Football Tops” and “Go Square Go” were delivered, along with the others, before a carefully selected projected video backdrop. Each played out to a warming audience, vocal but never raucous, and always encouraging.

The neutral, if it is possible to have such a person at a Glasvegas gig, could at times get a little distracted through some of the more down tempo, and what they would no doubt consider self-indulgent, numbers. Tonight, though, the likes of “Ice Cream Van” had an extra flake of intensity, and “S.A.D. Light” made them shine like stars.

A two stop encore ensued led by James and Rab with “I’d Rather be Dead” and then re-joined by Paul and Jonna for Daddy’s Gone to which they left to heartfelt applause and appreciation which was reciprocated by James in particular.
It may have been the Crying Onion Tour but there were no tears before bedtime tonight.

You can read KOBI’s review of 2012 and our pre-gig interview with Glasvegas and see additional photos of the gig.