A review of Desecrator, Toecutter and Fallen Riot at Madhatters, Inverness on the 8th of November. 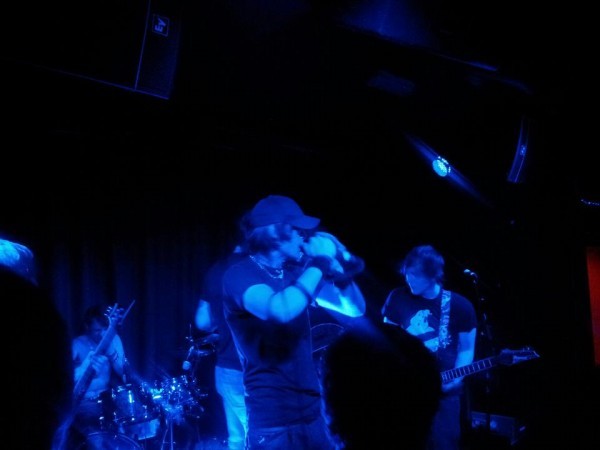 Tonight is the first of hopefully regular metal night in Mad Hatters. A triple header of Desecrator, Toecutter with brand new singer and Fallen Riot. There are some events that are easy to review and three metal bands is a no brainer.

It kicked off with the one man death metal show that is Desecrator. Rumours of alternative stage wear were thankfully unfounded. Using backing tracks and detuned guitar, Mr Desecrator is wise to the fact that the slower the riff, the heavier it is. In true Sabbath and Slipknot fashion, there was some outstanding riffage. Mr D growled and snarled his way through his set and did his best to encourage a pit in front of him and had it been later on there would have been some takers. I snatched a few words with the man afterwards. He was hopeful that the event becomes a regular event and was quick to praise Steve Robertson who has been very supportive of bringing metal back to Inverness.

Next up were Toecutter with their new lineup. From the outset, Toecutter had an easier ride, perhaps due to the more regular spectacle of the full band format. An arpreggiated introduction soon burst into the punchy “Divide”. This may have been Dean Kernaghan’s first gig with the band but he showed no sign of nerves and is indeed a confident front man. The clear bright sound from the PA did Toecutter a favour and their multi-tempo and lengthy riff-fests along with a front man full of attitude demonstrated a band with loads of potential – one to watch for next year? For me, two of the new songs “Nerve of the Empire” and “Bliss Within” shone out and there was even the beginnings of a little mosh pit towards the end, perhaps as the alcohol took hold. After the gig Craig (Patterson, guitar) and Dean told me they are recording a 4 track EP this coming weekend including the aforementioned songs. Toecutter are next in Inverness on 24th of November in the Eagle Bar –another Inverness venue looking to back local bands and keep music live.

The triumphant return of Fallen Riot to was cut short by a broken guitar in the first song. However, after this inauspicious start, they did not put a foot wrong. Fallen Riot alternate atmospheric moments with the power and edge of Biffy Clyro, the complexity of Killswitch Engage and maybe even the brutality of Sepultura.

Nick Laidlaw on vocals is an engaging and self-assured front man who spends as much time off the stage as he does on it. The twin guitar assaults allowed serious chugging and intricate interplay while maintaining a maelstrom of sound.  There were even some guitar solos. Call me old fashioned but I love guitar solos. The angst ridden songs including the charmingly titled “I don’t know who he is but I want his head on a stick” have a maturity of song writing that takes the listener on a journey – the light and shade make the darker moments that bit darker.

Fallen Riot had no need to wonder whether there was going to be a mosh-pit as the whooping before they had even started would have told anyone that a happening was on the cards. Fans of the band were evident singing the words of the songs throughout and getting up close. It has to be said that Fallen Riot were no doubt the strongest of the bands on show tonight and would be worthy of a place on any stage.

So that was the first and hopefully not the last Metal night in Mad Hatters. Surely Inverness needs a rock/metal night – if you like metal, get out there and support it! As an aside, I popped downstairs to see the Root-Ma-Toot swing band – a 17 piece brass outfit in some kind of salsa frenzy. The place was packed. If this is a typical Thursday night then it is no wonder Hootananay has such a great reputation for live music. Get out there and support your local music scene.

The next metal night in town is at The Eagle.