The Eagle, Inverness have unveiled their musical line-up for November with an impressive array of talent on show. 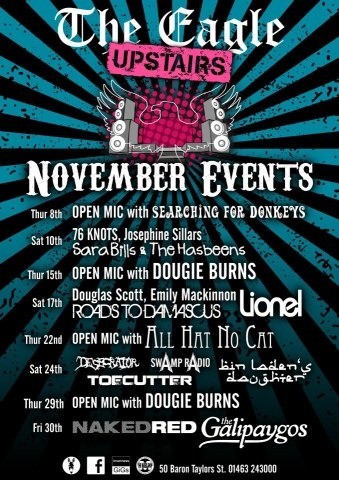 Every Saturday of the month will see a selection of local (or relatively local) acts. Saturday the 10th starts with a bang as winners of the Battle of the Bands winners, 76 Knots, return to The Eagle. On the night they will be joined by singer songwriter, Josephine Sillars and the sublime Sara Bills & The Hasbeens making their debut at the venue. The week after Douglas Scott and Emily Mackinnon will be joined by the melodic/prog of Roads to Damascus and the band, defined by their  “aggressive guitar tone and vocals work”, Lionel.

The 24th sees a distinct change of pace with Desecrator leading the charge bringing his one man death metal act to the venue. He will be joined by  Toecutter continuing their march following the recent addition of Dean Kernaghan as frontman. Swamp Radio will bring a little bit of order to proceedings with their prog-rock sound and order goes out the window with Bin Laden’s Daughter who describe themselves as “4 guys with instruments, who hate everything and want to annoy you”.

The Eagle manage to squeeze in an extra night of music in November with Naked Red and the Galipaygos playing on Friday the 30th.Of course,Thursday nights see the continuation of the Open Mic evenings, with Dougie Burns hosting the nights on the 15th and 29th,All Hat and No Cat on the 22nd and Searching for Donkeys hosting proceedings on the 8th.

It’s good to see The Eagle build on the momentum of the Battle of the Bands and open mic nights, there are still slots available to play over December if your interested please contact Barry Macfarlane.

You can see loads of our coverage of The Eagle and acts that have played there.