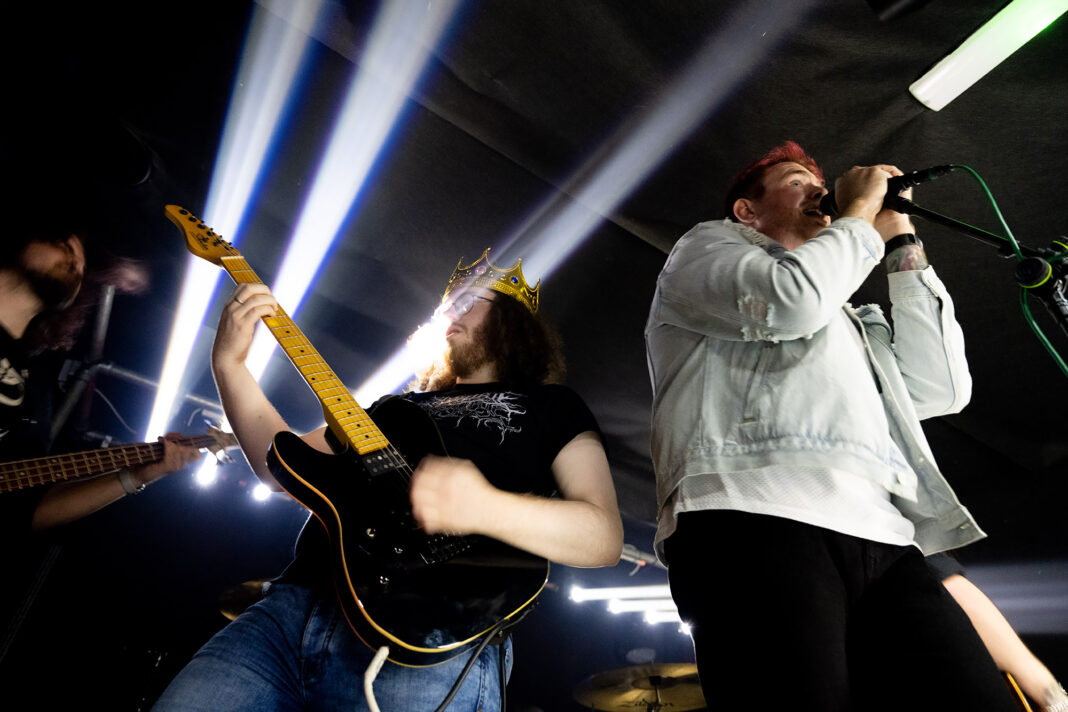 KING KOBALT , with support from Susanna Wolfe and GTF at The Tooth and Claw, Inverness

From Cobalt to King Kobalt, we’ve followed the band from their early days and the EP launch and now, sadly, we’re here to see their last gig. The last time I wrote about them I took a certain amount of malicious glee as they woke up Belladrum and the ‘squeals of indignation from the hungover zombies sprawled across the campsite’ while their early afternoon slot roused the slumbering masses from their corpse-like states after a night of far too much alcohol. This was in part fuelled by jealousy on my part as this forty-something writer had to drive home each night. Serves you right young people, serves you bloody right. Irritatingly, tonight is no bloody different and I’ve somehow been railroaded into driving again, our new photographer coming up with some cock and bull story about his own car having a bald tyre that couldn’t possibly be moved so can he have a lift please. Fine then.

Anyway, Susanna Wolfe eases any grumps on my part and her proclamation that ‘just because I’m old and decrepit doesn’t mean I can’t rock’ is borne out by an impassioned set that excoriates ex-husbands and generally doesn’t tolerate any nonsense. Although it is just her and a twelve-string guitar, she does indeed rock which sets the tone well for the racket that’s to come. What’s particularly nice about this evening is that, while the audience at the Tooth and Claw are here to see King Kobalt, there’s a support and deference given to the support acts that you don’t always see elsewhere. She finished off with a reminder and a command, ‘I’m Susanna Wolfe, buy my fucking CD’. Yes ma’am.

Greater Than Fear (GTF) are the latest project by Inverness rock stalwart Toby Michaels and this project has teeth. Of course, the usual Michaels mannerisms are in place, whether it’s stalking into the crowd, gurning, twitching on stage or demanding that he is carried across the dancefloor like a hairy, sweary Pharoah. The energy and noise from the stage seem like the culmination of the years of work he’s put into the music scene. As you’d expect, the humour and stage theatrics are there but the musicality is also present in spades (and guitars) and it’s immensely enjoyable. GTF are heavy too; you have the melodies that Toby is more than adept at creating, but it’s interspersed with periods of properly heavy music, guttural roars and thrash metal solos.  We’re losing King Kobalt but we needn’t worry that heavy music in Inverness is going to be under represented with GTF on the scene.

King Kobalt make their way to the stage for the final time, their majesties resplendent in crowns as they storm through the crowd on their way to the stage. This is a band that isn’t going to go gently into that good night, instead they turn the noise up to 100 and rage against the dying of the light. (Yep, we just mangled Dylan Thomas, not sorry). It’s been about three years since their last gig, ‘technically we broke up three years ago but we wanted to come back for one last gig’, and a Tooth and Claw gig is a fitting place for it. The venue is hugely supportive of the rock and metal community and it’s an intimate setting that the band have played at a number of times during their short career. Fortunately it’s not quite the hot house it once was, but it still gets suitably hot and sweaty as mini moshpits form and an awful lot of hair is flung about.

This isn’t a maudlin final set though, rather a celebration of the band and the music they’ve crafted together. ‘Bourbon Nightmares’ comes with a bottle of bourbon liberally poured down band member’s throats and tunes like ‘Martyr’ and ‘Shadowboxing’ showcase the raw talent that the band posses… possessed? King Kobalt have always been an entertaining band to watch, and this gig is no different. Under the circumstances you’d forgive a few missteps, but they roar through their set and then.. that’s it. Frontman Craig Kelly indicates that he’d quite like to go to the bar now, and with those last few power chords ringing in our ears, the band step off stage and another wee piece of Inverness music history is consigned to Spotify playlists and old reviews in iGigs. All that being said, there’s altogether far too much talent on stage and I very much doubt that’s the last we see of them individually or in a group.

So while this particular shower of Kings might well be dead, tonight proves that heavy music is still very much alive, kicking and growling in Inverness. It is genuinely very sad that the band have decided to call it quits but I think they leave behind a scene that shows real potential along with a nice reminder that out of all the audiences you get in music, metalheads are always the best.