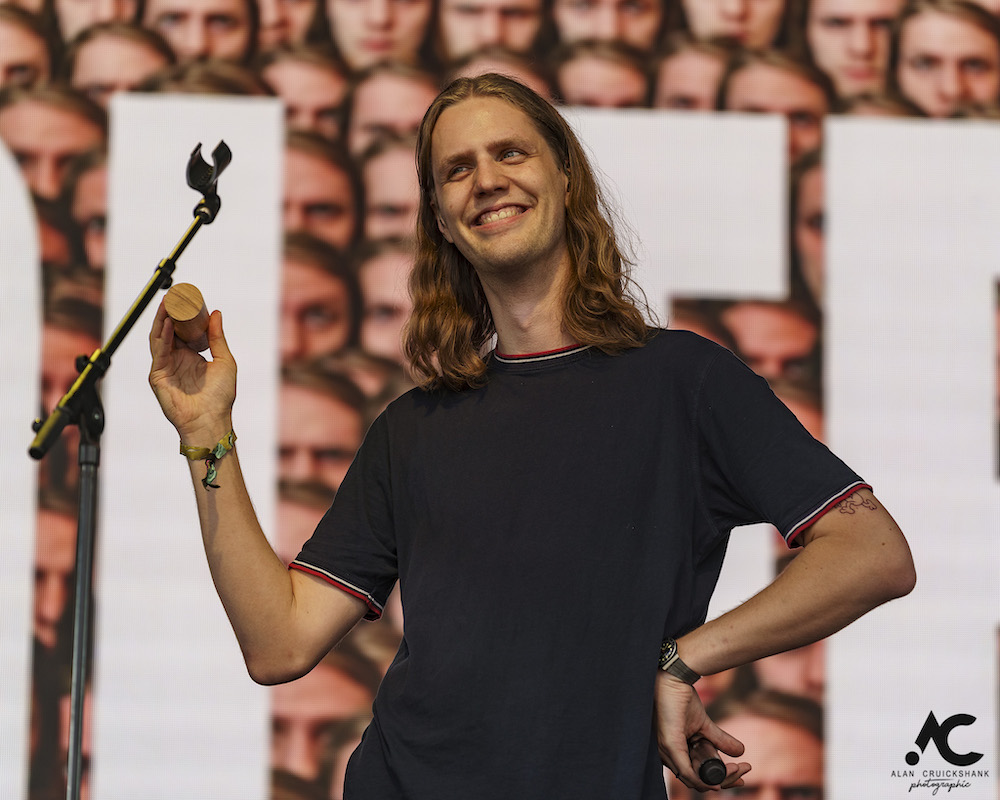 A review of Saturday night at Belladrum 2022 including Hannah Rarity, Dadi Freyr, Ash and more.

It’s Hannah Rarity‘s first time performing at Belladrum and she’s a bit taken aback by the Highland weather, ‘When I left Glasgow I wasn’t aware it wasn’t going to be a very ginger friendly festival!’. It’s another glorious day on site, any overnight rain is a distant memory and Hannah’s set is an ideal tonic for any of the more fragile heads in the audience. It’s probably unfair to pin her down as a purely traditional Scottish artist, rather she weaves a delicate thread of traditional elements and jazz together into a very mellow end result.  ‘My Friend’ from her latest album ‘To Have You Near’ lyrically is something we can all relate to. ‘Suns come down, fires been lit, it’s been a hell of a year…. I know we’ve been talking all night my friend, but stay with me, stay with me’. Almost an ode to Belladrum itself.

‘She Must be Mad’ is a comment on female self esteem and ‘not comparing ourselves to each other’ while her cover of Stephen Collins Foster’s  ‘Hard Times Come Again’, written during the American civil war, is sadly still appropriate even now.

Hamish Hawk punted out another one of the weekend’s ‘how bloody good was that?!’ moments with a triumphant show in the Grassroots tent. Quirky storytelling combined with earworm hooks – it’s something of an accomplishment to get a song titled ‘The Mauritian Badminton Doubles Champion, 1973’ stuck in anyone’s head – and some of the best dancing/posturing you’ll see anywhere this weekend. When I got home I thought I’d better check my notes to see what I could use for this review and found that… I hadn’t written any! A sure sign that I was so absorbed and enjoying what I was seeing and hearing on stage. ‘The Mauritian Badminton Doubles…’ (if ever I need to get my word count up I just need to review Hamish Hawk more often!) is introduced as being about ‘ecclesiastical architecture and racquet sports’ and I’d argue that the lyrics, ‘to write a cathedral, I’ll need a ballpoint pen, it’ll sound like common people sung by Christopher Wren on an upright piano with nice narrow keys’ are some of the finest lyrics written anywhere. He chucks in a cover of ‘Debaser’ by Pixies for good measure which descends into just the right amount of chaos. Think the Divine Comedy but with much cleverer lyrics… sorry Neil!

And then we turn things up to eleven to watch Mason Hill put the ‘hot’ into the Hothouse stage. Despite being a bit of a tart when it comes to music genres,  I’ll always return to my metal roots and Mason Hill more than adequately fill that need for noise. They’re clearly delighted with the attendance down at the stage and lead singer Scott Taylor comments as much saying, ‘we’re the happiest band in the world’. He does note that at festivals not everyone is familiar with their music so they let loose with a cover of ‘Best of You’ by the Foo Fighters to lure in anyone unsure of where their musical roots may come from. It’s the kind of music and performance that makes me want to be in a rock band again, an assured and confident performance that surely points them towards billings higher up in the future.

It’s probably fair to say that Dadi Freyr is on the opposite end of the spectrum to Mason Hill and if you could distill music into its summer expression you’d find the lanky Icelander waving back up at you. He’s not averse to having fun and taking good humoured piss out of us and himself. ‘This one will make you go bananas’ he smiles, before kicking off a techno-beat version of The Birdie Song. It does exactly what  he intended and the crowd does indeed go bananas, along with it being the final straw for the stewards who burst into fits of laughter. If anyone had intentions of invading the stage, this would have been the time to do it. One was doubled up laughing and the other was doing the birdie dance. We have the video evidence to prove it too. ‘The fact the birdie song gets the biggest reaction really hurts my feelings’, comments Freyr afterwards. Possibly a nod to the fact that many folk will only really know their Eurovision entries. Speaking of which, their Eurovision entries go down a storm and I’ll challenge anyone to find many better pop tunes than ‘Think About Things’, which surely would have won Eurovision 2020 if it had gone ahead? ‘Feel the Love’ is europop at it’s finest while he continues to play to the home crowd by going full Runrig and giving them the chance to sing along to his rendition of Loch Lomond. He signs off with, “Thank you for the Here We Fucking Go’s”, a sure sign as any that he’s been inducted into the Belladrum family.

Selected as a Tip for 2022 by BBC Introducing, Lizzie Esau shows off her brand of edgy, pop rock in the Seedlings tent. Sadly I only caught the last few songs but latest song ‘The Enemy’ is worth checking out if you missed her set. Hints of No Doubt here but also more modern acts like Beabadoobee and Wolf Alice.

Ash close off the Hothouse Stage and as you’d expect, it’s a set that should have pleased even the most casual of the band’s fans. They’ve got stiff competition with Nile Rodgers and Chic over in the garden but it’s a good number that show up to see out Saturday night’s live music. There’s not too much between-song chat although Tim Wheeler does muse whether we’re called ‘Belladrummers’ and isn’t too clear on what day of the festival we’re on. ‘Shining Light’ is dedicated to Annie Lennox – who I hadn’t realised had covered the song back in 2009 until I had a look on Google! ‘Kung Fu’ sounds fantastic and a real testament to the efforts of the sound engineers over the weekend. The sound for the most part was pretty much spot on over the entirety of the festival. ‘Girl From Mars’ is performed just as the fireworks go off over on the garden stage. It actually works pretty well with the song but would have worked perfectly if it was in time for the next song ‘Burn, Baby Burn’! Not that any of this was planned of course and it was simply down to the timings of the stages.

My final act of the week was courtesy of Noisy as they closed off the seedlings stage. I’ll usually pop my head into the tent to see what’s going on for the last half hour and this was no disappointment. It was a high octane performance and one of the outstanding sets of the weekend. Just when I was thinking about going home too! The thirty minute set barely did them justice – partly because people were still wandering in after seeing Ash, so an additional half hour would have been ideal. In that short set we have a circle pit and their version of ‘Praise You’ by Fat Boy Slim which nearly causes a riot. I’m no particular expert in this genre so forgive any inaccuracies, from my perspective they fuse rap, Jungle, House into a heady mix of noise that Saturday night’s are made for. It is nothing short of brilliant, we need to get them back up North again.

Final word goes to the Gok Wan DJ Set and the absolutely massive crowd that gathered to finish off the party at Belladrum. The positioning of the Hot House stage and the gentle slope down to it does seem to lend itself to bigger audiences without having to worry about some of the bottlenecks you get down at the Garden stage. I wonder whether we’ll see a switch round in future editions where the main headliners will move to this stage and the Garden will be for acts that’ll attract slightly smaller audiences?