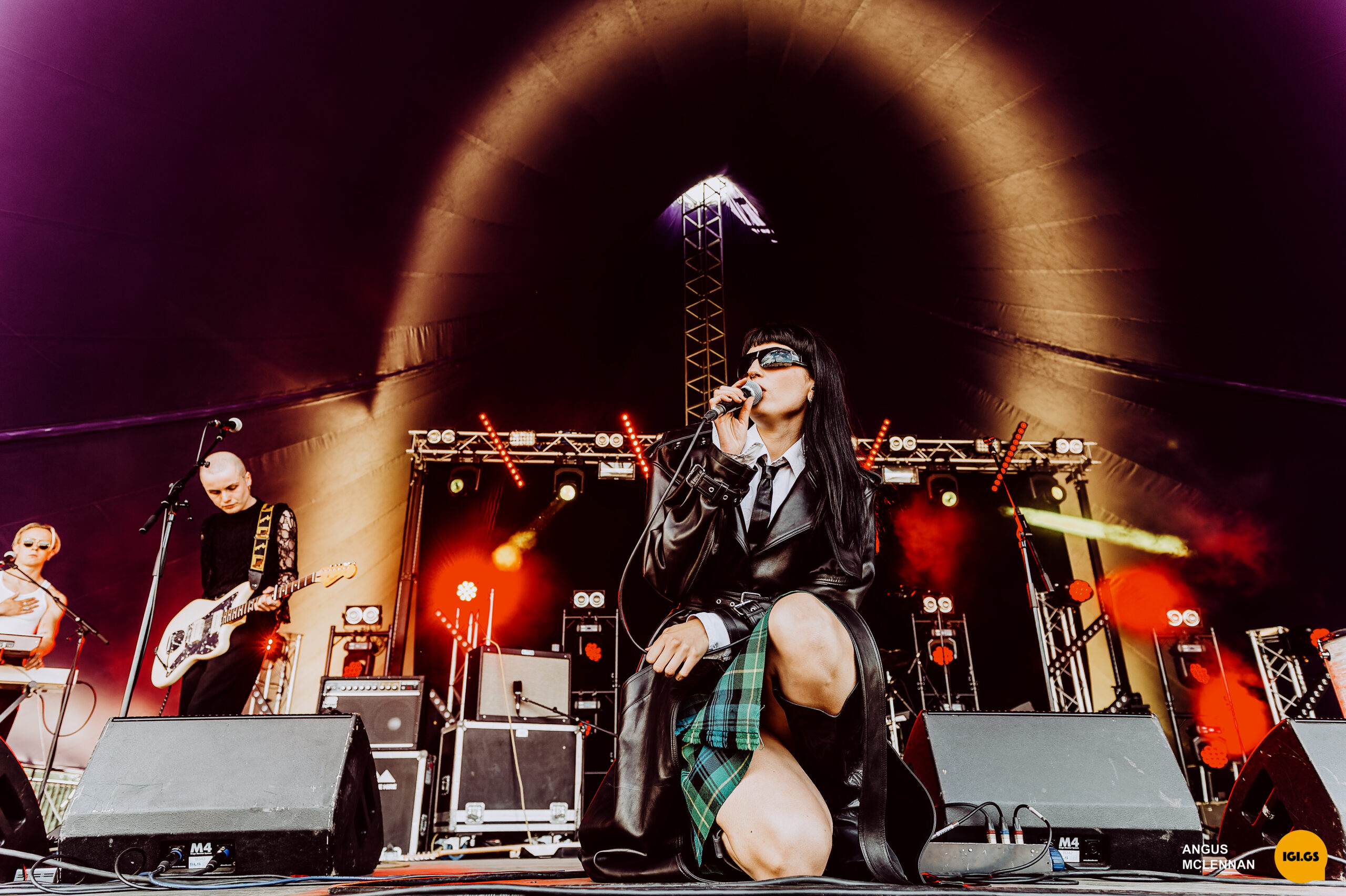 The sun is out, day two of Belladrum is underway and Katie Gregson Macleod is first on at the Hothouse Stage. The charismatic Inverness singer has attracted a good-sized audience for the early slot and it’s easy to see why. Hailed as one to watch in 2022 by Vic Galloway, she crafts intelligently written tunes and, unlike many of her contemporaries that drift towards being a little po-faced, isn’t afraid to let rip and up the pace a little. I managed to have a quick chat with Katie after the set.

“It was so much fun, we were obviously quite taken aback by the sheer size of the stage but super excited. Erin (my guitarist) had a moment when she realised ‘wait this is the loudest my guitar will ever have been’. Also, last time I played the free range folk stage on my own so it’s a big step up! However, when we got on we just totally relaxed into it and had a blast. There was a good crowd for being that early and they were really responsive and seemed to be having a good time as well! Especially lovely was playing my new single (Second Single Bed) and having so many people singing back.”

Over on the Grassroots stage Lewis McLaughlin is enchanting those seeking a little shade from the sun. He has two slots today with the other at the Seedlings stage later in the afternoon. This seems a much better setting for him though, fitting perfectly with the folksy atmosphere you can get in this particular tent. It should be noted that moving the stage that bit further away from the main stage really does benefit those quieter performances. There was a tendency for a bit of the sound to seep into the area, which could spoil a performance if you were stood at the further reaches of the tent. Lewis doesn’t need to worry about any of that and it’s a masterful performance where you can hear the influences of John Martyn and the Villagers in his music. There’s even a hint of John Grant in there too. Debut album ‘Feel the Ground you Walk Upon’ is out now and it was the perfect accompaniment on my home later in the evening.

Sticking with the Grasroots stage Tamzene is another local artist who you may have seen plying her trade busking in Inverness. From there she’s played multiple venues across the Highlands and more recently has had a slot supporting Adele at her Hyde Park gig. We’ve been saying for ages that she’s one to keep an eye on and we’ve been proven right so far. As happy behind a guitar as she is the piano, Tamzene keeps it simple, letting the lyrics and melodies tell the story without the need for a backing band. It’s powerfully evocative stuff. You can see why she was chosen as a support act for Adele. There are definitely similarities, but where Adele tends to belt ’em out, Tamzene’s music is more soulful and has a subtler aspect that, in this writer’s opinion at least, is far more effective.

Lucia and the Best Boys was a chance discovery for me and not an artist I was particularly aware of before Belladrum. This ended up being one of the highlights of the weekend so far. She dominates the stage and it’s an incendiary performance from the very start. The confidence and musicianship is dead on and a mix of Gothic Electro Pop – which may just be something I’ve made up! It’s hard to pin down a particular genre, I’ll try again… like if Taylor Swift gothed it up, added more guitars and got even angrier… that’ll have to do. For ‘Somewhere In Heaven’ she recounts painful breakup and how she escaped to stay at a friend’s house in LA. The house was built by two lesbians in the 1920s and she says that, despite feeling a little homesick, knowing that information made her feel a little more at home.

‘When You Dress Up’ builds slow before erupting into a fiery noise of guitars and synth, certainly one of the highlights of the set and a flavour of more things to come from the band. A new album is being recorded in Stornoway and hopefully we’ll see the end results of that soon.

And then we have the Lottery Winners, part music show, part comedy act due to Thom Rylance’s between-song chat. He’s keen to point out that he has an Only Fans and it’s 50% off at the moment ‘cos I’ve only got 50% of a penis’. This is the intro to ‘Little Things’ so he might have just been joking. The band do seem a little nervous, professing that they haven’t always had good gigs in Scotland but they’re a hugely popular draw here despite him hectoring the folk sitting down and accusing them of hating music. And then there’s the poor soul who came to Belladrum wearing a Metallica ‘St Anger’ t-shirt and was rightly and justly subjected to a tear-down from Rylance. Special mention to music teacher Fiona, who was also the focus of some of the lead-singer’s advances. Although there was nearly a cultural affray after he misheard her grading of an ‘A’ as an ‘E’ for one track. They’re perfect for a sunny Friday afternoon though, the summery indie tunes are exactly the kind of the thing to put a pep in your step (not that kind of pep, if you’re reading this Rylance you grubby sod) with ‘Headlock’ and ’21’ being set highlights. 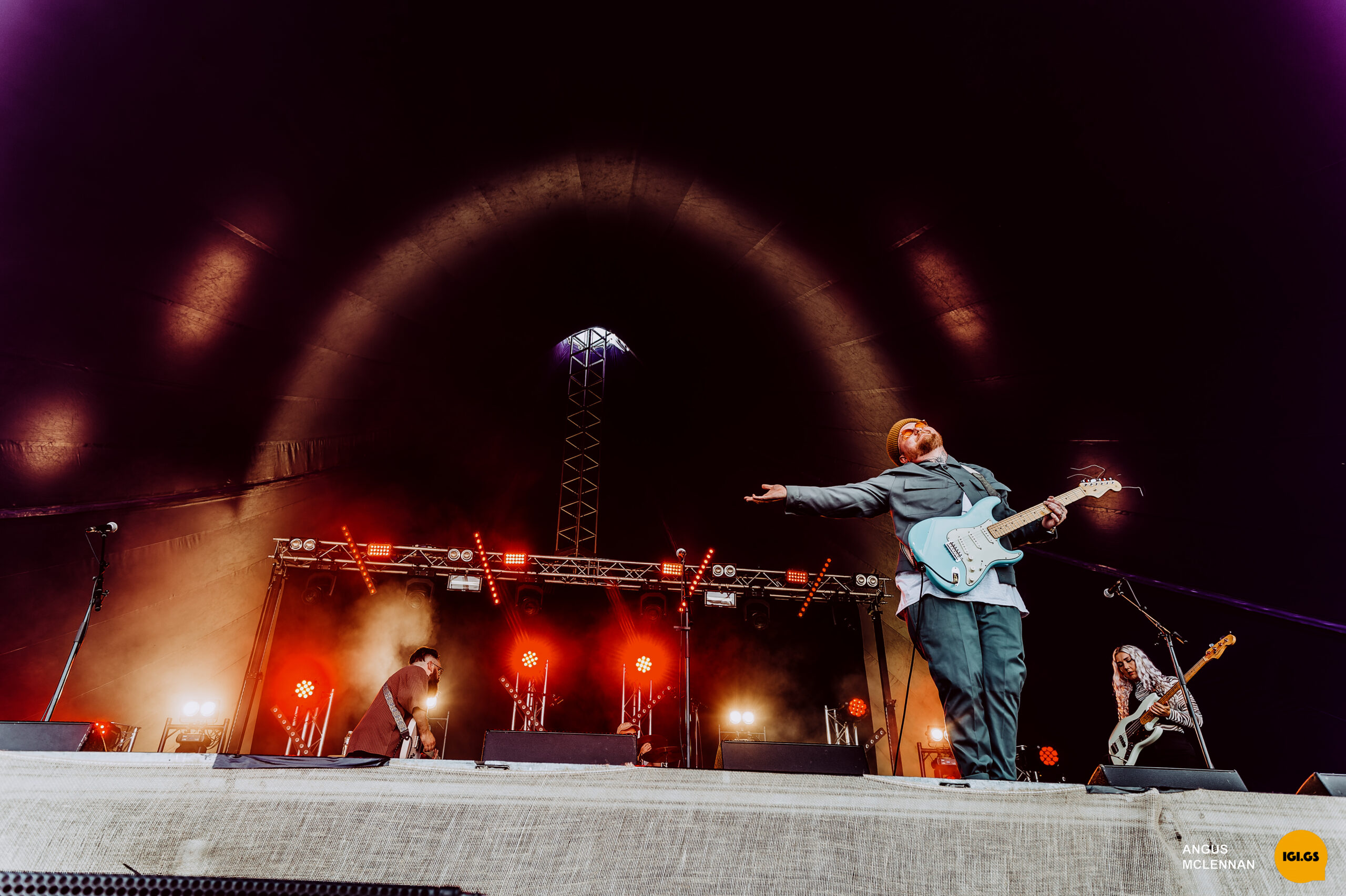 Speaking of summer, Ibibio Sound Machine are a sparkling bright spot over on the garden stage. Like a lot of the artists at Bella this year, many talk about how they occupied their time during lockdown by concentrating on writing music and they are no different. Frontwoman Eno Williams tells how she was concerned about the amount of darkness and wanted something to protect us all from the bad. ‘Protection From Evil’ was written with all that in mind. It’s a pulsating tune that builds to the chorus of with fists pumping in the audience while Eno whirls about the stage casting out any bad vibes that may still loiter on the periphery of Belladrum. It’s a heady mix of African music and disco beats and quite frankly I could have listened to that all night. Lets get them back for a headline slot soon! 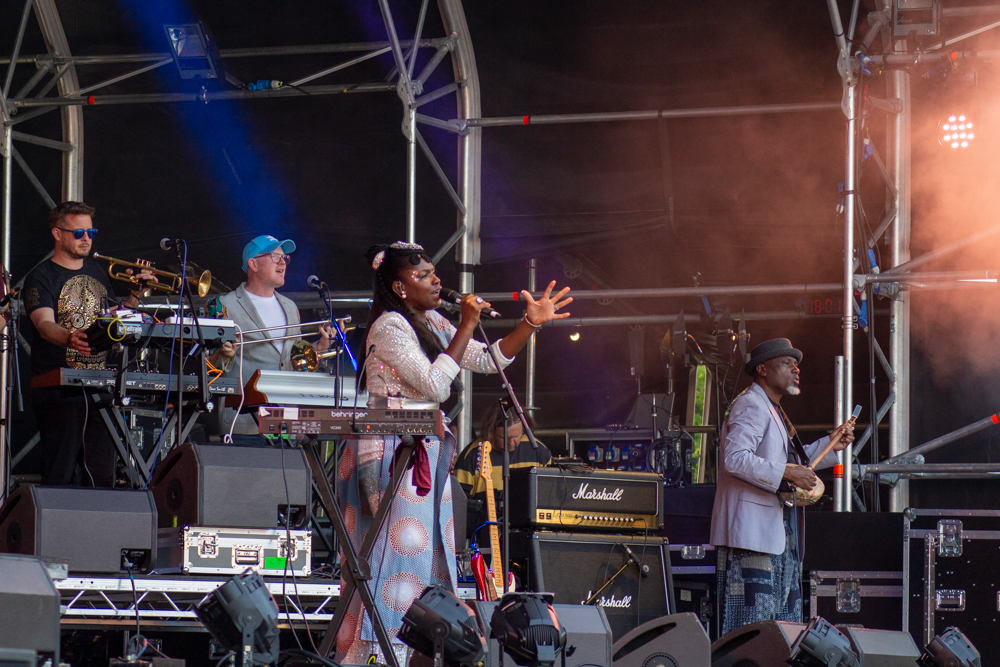 Matilda Mann at the Grassroots sits in a similar vein to Tamzene with the moodier edge of Billie Eilish sprinkled throughout. The Londoner is an emerging talent showcasing a set full of dreamy pop tunes. ‘i’ve been writing a lot and i have a lot of songs to give to the world’. New single ‘Margaux’ gets one of the loudest cheers of the evening and she clearly attracted a number of new fans along the way.

Back to the Hothouse and by this point my step count has nipped past the 10,000 mark – I can’t be the only one who feels like Belladrum is a bit of work out afterwards?! This time it’s to catch Vistas who are a fresh breeze across the sweaty field with instantly catchy songs and high energy throughout their 45 minute set. Singles like ‘Stranger’ and ‘Retrospect’ (16 million listens on Spotify and counting) go down well with the young audience who hang on every lyric and sing along for the majority of the band’s time on stage. Like a few of the artists throughout the weekend, they’ve started on smaller stages and earlier times in the past and proved their mettle over the years to get those later slots on the bigger stages. Definitely a band for those who like their guitars, pop hooks and songs they can road-trip too.

Christone ‘Kingfish’ Ingram arrives at the Grassroots stage with an impressive list of plaudits for someone early on in his career. A Grammy winner with his latest album 662 there was a palpable level of excitement ahead of his headline slot at Belladrum. Being on at the same time as the Fratellis caused a bit of consternation in terms of who to go and see but I’m not sure we’ll get another opportunity to see him in another venue quite so intimate in years to come. And it is a truly awe-inspiring set, an hour of blues fused with funk and soul, the man’s talent more than justifies the Grammy. There’s not a lot of chat between songs, instead (and excuse the horrible cliche) he lets the music and his guitar to the talking. 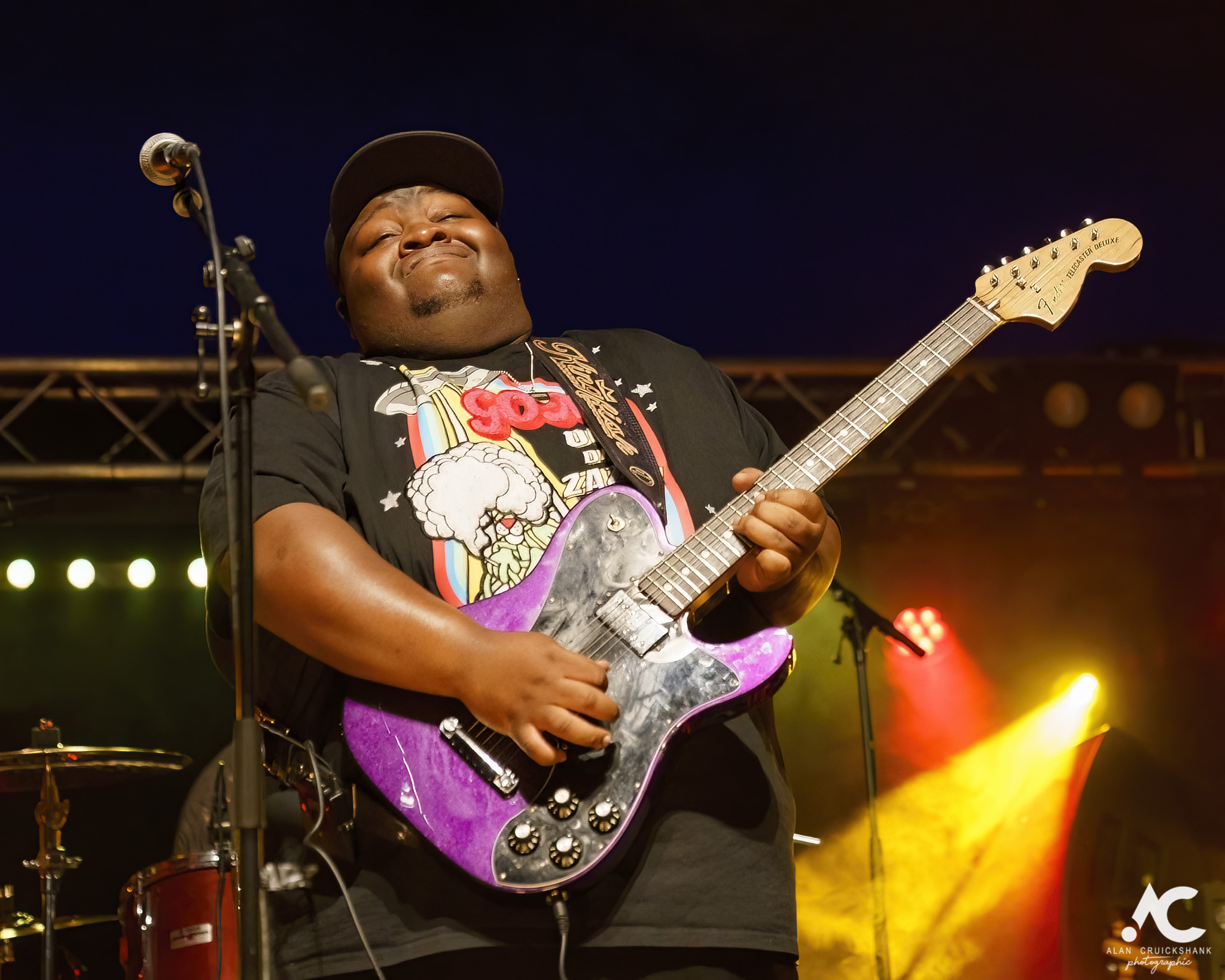 You could fling superlatives at him all night, but for most of it I was blown away by the passion and talent on display. Not just from Christone either, the band are stars in their own right are match him for talent and musicianship. Of course with blues guitarists you get blues solos and we’re not all fans of overly long widdly fretboard wank-fests. However, the solos here far from boring, and he wrings passion and feeling out of each fretted, bent and plucked note – sometimes with his teeth! A cover of ‘Hey Joe’ gives me honest to goodness goosebumps and you can see where the Hendrix and BB King comparisons come from. I’m hearing a little Jeff Healey in there too in the tone that he uses. We’re also treated to an off-stage wander where he strolls into the middle of the crowd all the while soloing without missing a note.

It is, without a note of exaggeration, one of the best performances by any musician I’ve seen at Belladrum. What a way to spend a Friday night. What next?