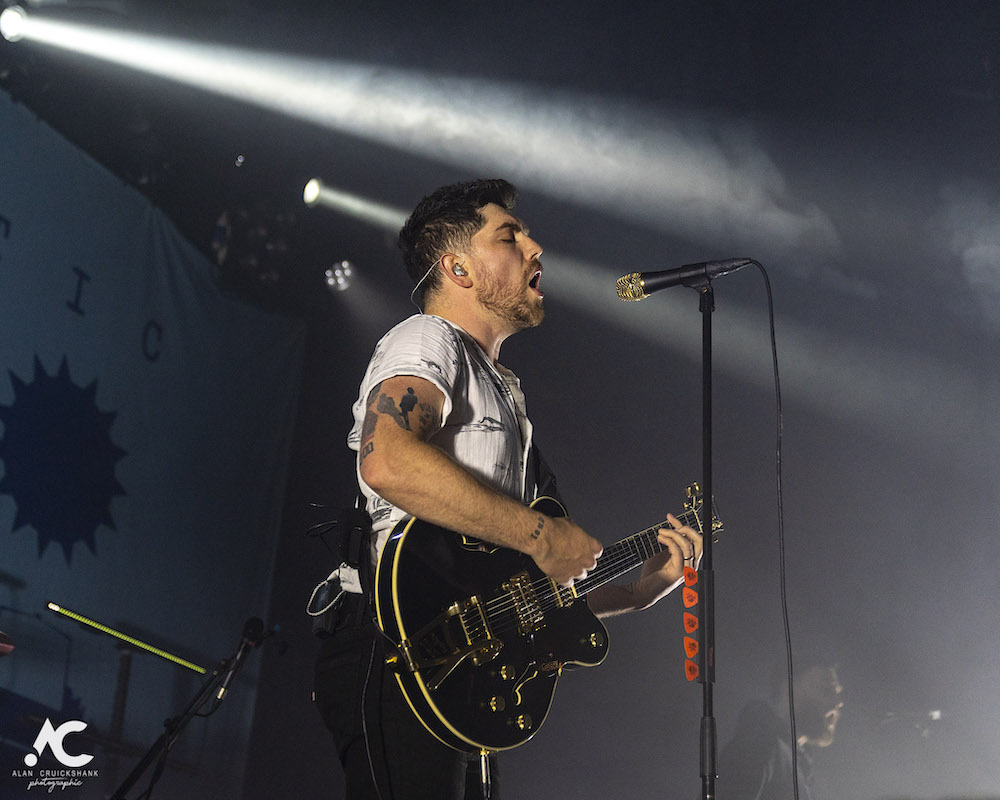 Twin Atlantic, with support from Declan Welsh & The Decadent West and Dead Pony, at Ironworks, Inverness on the 11th of May, 2022.

You can see our pictures of Twin Atlantic from the night here.

When I first saw Twin Atlantic at the Ironworks, back in 2008 the front row was filled with emo kids, and the band were fresh in their minds from their fabled performance in the Seedlings tent at Belladrum. It’s been some journey for the band since then but the emo kids are back it’s just with the passage of time you might not recognise them.

The early arrivals were treated to the hard guitar edges and jagged vocals of Dead Pony. Anna fronts the band, and although set above the crowd she is still able to get in the faces of the front row. They are a confident, no holds barred four piece. From start to finish there is no let up. You set the bar high when you place a band as good as this as the opening act.

For those arriving fashionably late Declan Welsh and the Decadent West take the stage shortly after Dead Pony. A familiar face around these parts with both band and in a solo capacity, Declan cuts about the stage with a bold swagger. Guitar led rock n roll with the focus firmly on Declan. Vocally he has variety in both intensity and in pitch and gives it rapid fire spoken word on ‘Dependency’. Their album was on sale in the foyer too…

The love was shown when ‘Everybody’s Free’ came over the soundsystem and Twin Atlantic strutted onto the Ironworks stage. ‘Free’ was the theme of the first part of the evening as Sam and the band set about playing the full album, with a full on light show and an album cover backdrop. Ten years after its release it transported the audience back to those early Ironworks shows, this was their eleventh headline at the venue, and the return of youthful energy for many.

It wasn’t just the energy but their voices too, as they joined in as that extra voice to the songs. Like the album there was no talk between songs, it was a near seamless move from one track to the next. From the frenzy of ‘Edit Me’ through the singalong of ‘Free’ and the relative calm of the virtually acoustic ‘Crash Land’, and that electric cello by the way, through the solidness of ‘Serious Underground Dance Vibes’ and all the way to the album’s conclusion. It was satisfying. It hit the spot in terms of delivering an album to a hungry audience. However, it turns out that this was only the starter.

The somewhat quiet, in terms of crowd engagement, Sam McTrusty came to life as the backdrop fell to the ground and we were transported forward ten years to the present day. More energy filled the already sweaty room. The rock got funkier as it reflected their current direction and the band squeezed on the accelerator. Inverness has always had a place in its heart for Twin Atlantic, in part fueled by their Belladrum journey from Seedlings Stage to headliners, but that love is not unrequited and Sam told the audience how much Inverness means to them.

The remainder of the set weaved its way through the band’s history ending with ‘Heart and Soul’ but had a stopover in ‘Barcelona’ and was there for ‘Brothers and Sisters’. If the second part of the set was the icing on the cake then the cherry on top was surely Sam’s crowd surf to the back of the room and the impromptu rendition of ‘Happy Birthday’.

Something changed tonight. Sure, Covid is still around, but so too is live music and tonight Inverness truly regained its appetite for it with the Ironworks first sold out show since the pandemic. Well played Twin Atlantic.

If you would like to see pictures of the crowd please check out our the IGigs Facebook page.

Like what IGIgs does? Please consider giving a little to the upkeep of the site via Buy Me a Coffee, it’s a big help that supports us to keep running this free to access website.