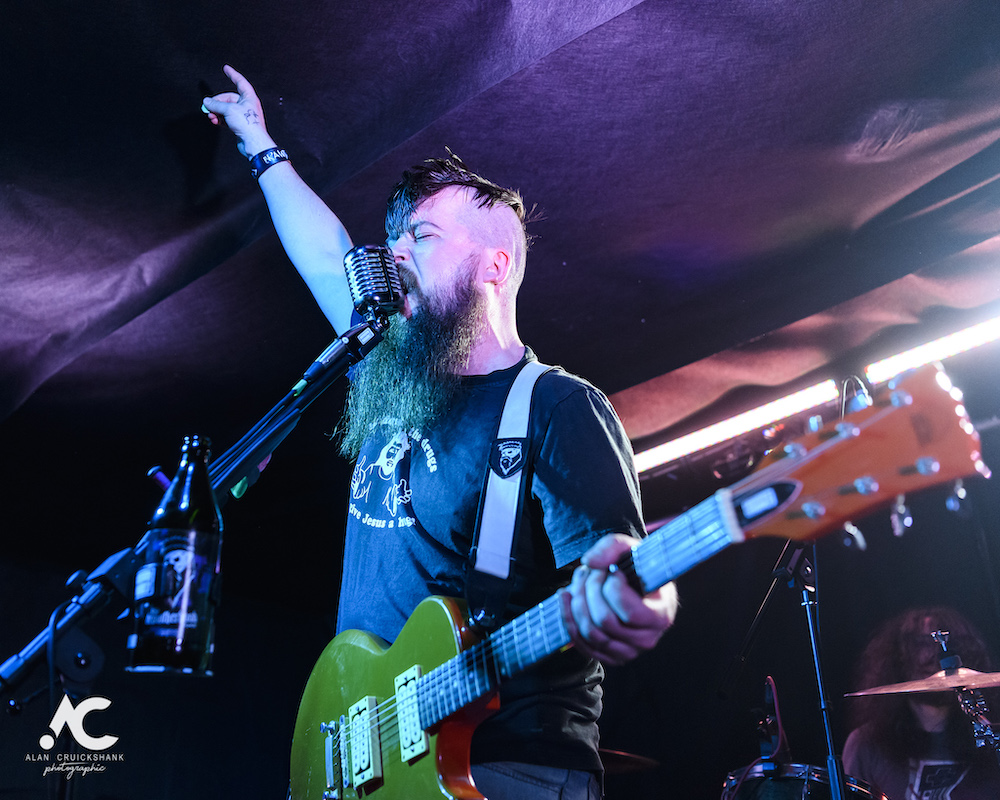 Ahead of their gig at The Seedling Stage at Belladrum 2019, The Dihydro answers a few questions from IGigs.

The Dihydro may be the “new guys” on the Inverness scene, but they are kicking up a storm ” with a sound we described as “big and beefy with an edge of menace”. We are looking forward to catching them at Belladrum 2019 and really appreciated to opportunity to ask them a few questions;

When we caught up with you in March, there was an air of surprise about the progress that you have made over a short period of time, is this still the case?

Absolutely!!  We have now had two headline gigs in The Market Bar and  Mad Hatters and both have been a great success gaining fans and we’ve even had people dancing!?!  We are leaving audiences with a ringing in their ears to remember us by.

The What’s On team described your live set as having  “a great, pure testosterone-heavy sound”, what do you think of the comment? And how do you manage feedback and reviews in general?

Perfect!! Although I actually preferred the description ‘’  imagine the invisible onslaught of gravelly rock like a wind tunnel blowing back your hair and sandblasting your face off’’ I like this alot!!

I love hearing what people say as everyone picks up something different from the live shows and its great to get the feedback. Mostly Being ‘You Guys Are LOUD!!’

From White Stripes to Death From Above 1979, there is a popularity in two-piece acts, what are the challenges and benefits of their just being the two of you in the band?

There are many challenges but there are challenges in all bands. I think being in a two piece we have alot of freedom. When we are playing together we very rarely play the same song the same way twice. It’s very fresh and exciting and we are trying to bring that to our love shows. We put our everything into playing live!!

Your track “Nigel Farage” doesn’t make any subtle points about your political beliefs, do you think that politics will play a larger part in your music in the future?

No!! This was just played during a jam I took the riff home and spewed out some words and then Nigel Farage was mentioned, it was around the time of the milkshake incident. We both liked it and there was the song. So I wrote a few more words although usually make some of them up on the night.

How important is playing Belladrum for you?

JUST WOW!! We cannot believe that we are getting the opportunity to play the Xpo North Seedling stage at Belladrum. After only a handful of performances. This will be our 7th gig!! Truly honoured to get this opportunity!

What are the acts that you are most looking forward to seeing at Belladrum 2019?

There are a few we are hoping to see.

Paris Monster –an American two piece band from Brooklyn, New York. They have been described as “electro garage funk.” These guys are great!

Mostly I think we will be making a huge effort to see as many local and unsigned bands as possible. The Whiskys, Walt Disco, Dazed Digital Age, Spring Break, Solareye, Iain McLaughlin and the Outsiders, Tom Mcguire & the Brassholes, The Collective, Colonel Mustard and the Dijon 5, and off-course Fun Box for the Kids

Given the sci-fi theme of Belladrum 2019, construct your band with sci-fi characters?

I think with the amount of hair on stage between us we would have to be a couple of Wookies!!

Would definitely use teleportation. I’d be too careless with time travel and end up completely changing the future in possibly the worst kind of way somehow.

You are allowed to time travel to one gig, which one is it?

Your band can soundtrack one sci-fi film, which one would it be?

What invention would you like to see a reality in the future?

Not to sound too obvious but….. a Teleporter.  Getting to and from gigs would be sooooooo much easier.  Just stick all the gear in the teleporter and away it goes.

You can catch The Dihydro at 1pm Friday the 2nd of August at The Seedlings Stage, Belladrum 2019.

The Dihydro are playing as part of Ice Cream For Crow Records event in The Tooth & Claw Inverness on Saturday 10th August with Little Love and The friendly Vibes, Casper Heyzeus, Ramona. £4 8pm. You can also catch them at Jocktoberfest 2019