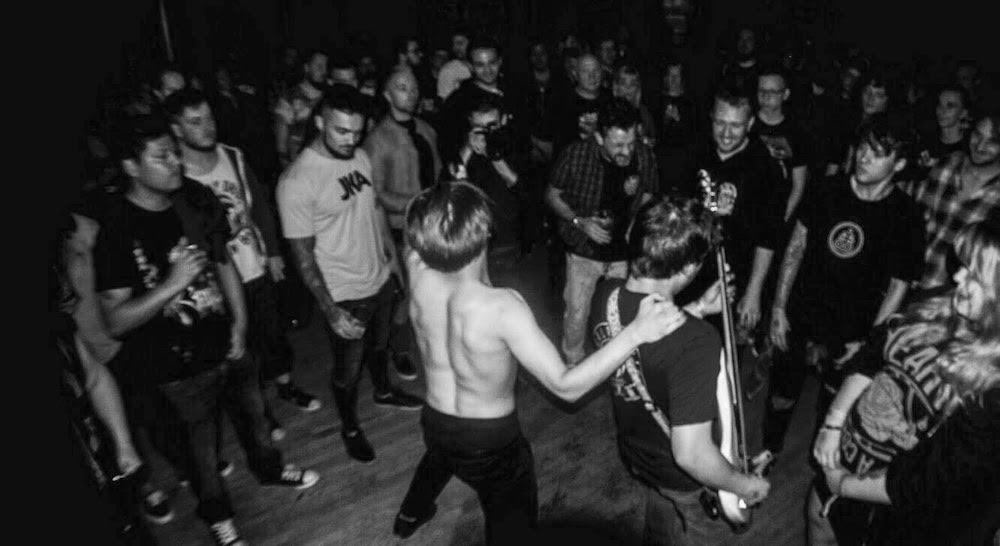 Ahead of their gig at Mad Hatters in November, Sharkteeth Grinder chats to IGigs.

The complexities and niche nature of Mathcore is well documented, how do you describe the genre to those interested but not yet initiated to the band’s sound?

Ross Davison (bass)- Mathcore to me is a mixture of aggressive, almost punky riffs infused with abrupt and often unwelcome changes in time signatures with a lot of influence from math rock – great examples of bands who recreate this sound would be the likes of The Dillinger Escape Plan, Converge & The Chariot.

Bobbo Haldane (vocals)- Ross has truly hit the nail on the head with this one. The movement of Mathcore has really pushed us above and beyond what we ever imagined, and I love being apart of it.

You have talked about how you use your music to express the state of society, what are the particular elements of current culture that motivate you?

Ross- To be brief and open to interpretation, hopelessness for future generations due to the sheer consequence of decisions made and actions carried out by this generation and even generations before now.

Bobbo- We all come from working class backgrounds, so I class us as a working class band for the people by the people and that motivates me even more. I feel we have a message in our music that people can relate to through our stories and background. We’ve had it hard and so has this band so that gives me the drive everyday for Sharkteeth. We live and breathe this band.

As a band that gives your music and performances their all, how has your approach to your music developed over the three years you have been together?

Ross- Since the start of the band, I think that just playing more has given me a better confidence and that spurs a bit more creativity.

Bobbo- I think we’ve come a long way in three years and matured very quickly from the early days, which I believe is shown through “Volume II”. It’s not been easy but we are still growing everyday with an ever growing momentum and hunger to play more, write more and progress.

You are ending a significant period of gigging that has taken you across Europe, what has been your highlights of this time?

Ross- 10000% touring in Europe. It was an unforgettable experience and I’d get back out there and do that every day for the rest of my life in a heartbeat.

Bobbo- It’s been a mad year with ups and downs but we’ve pulled through and made the year one we will never forget. Touring Europe and playing squats was amazing, the Palm Reader and Canvas shows back in February were banging, two shows in one day (Rocked Up Hootenanny and sold out Heart Of A Coward Show) was an achievement for us.

But the big one was supporting our hometown friends “Raging Speedhorn” on the eve of their 20th anniversary, with the original line up, and was just unreal. The show sold out in Corby and was just incredible for the all the bands involved with the two shows they played that weekend.

What has been the lure to the Highlands for the gig?

Ross- I love Scotland, any opportunity to come here is great, and to come and play music that people want to hear is even better!

Bobbo- As a band our goal is to play everywhere and anywhere so the Highlands has always been one of those places to tick off the list. Also, I’m half Scottish and the trip up the m6 brings back memories!

Do you have anything else to plug at the moment?

Bobbo- Please check us out on all social media platforms and follow our movement. Also both our EPs are available on Spotify/Apple Music, and Bandcamp has an extra split EP. Expect a new two track coming in January and also we’ve got a load of shows to announce before the end of the year. Also, a big end of year show to be announced!

Massive shout out to all these bands and friends below;

Heart Of A Coward