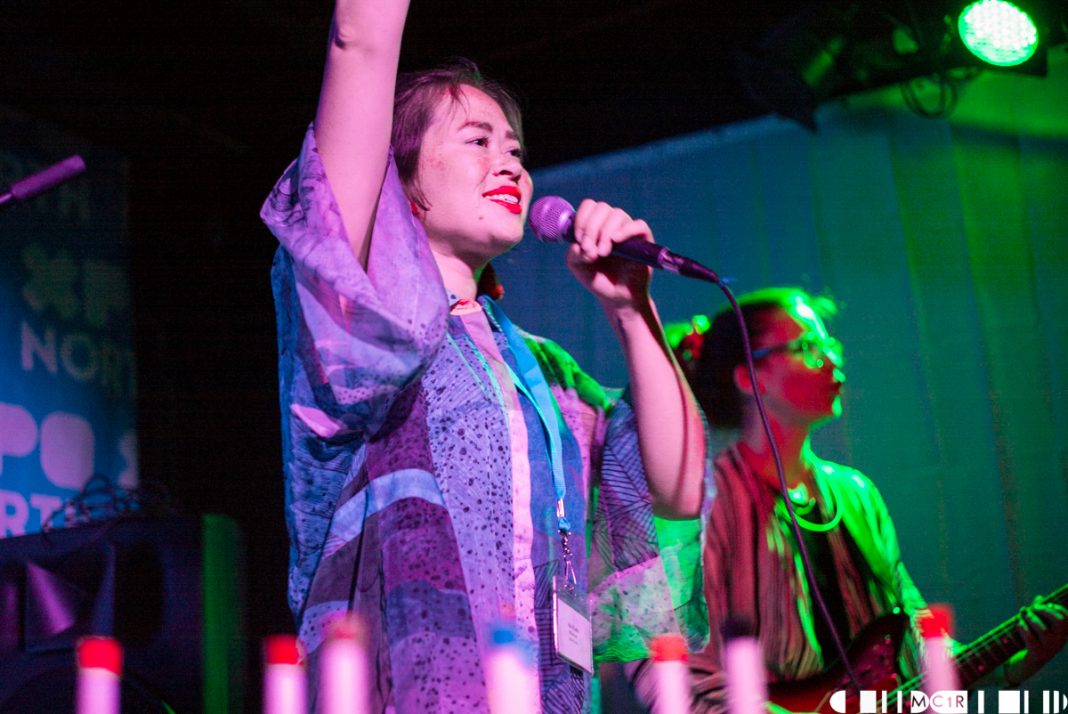 We look at Ida Kudo, Luna the Professor, Breakfast Muff and more, at XpoNorth

Thursday starts with Breakfast Muff in Mad Hatters and I’m immediately struck by the passion and energy of the trio. In this day and age of bland artists with bugger all to say other than pining for loves lost, found, lost again and posted about on instagram, Breakfast Muff are a breath of fresh air. ‘R U A Feminist’ is an attack on blokes who cynically declare themselves to be feminists with the sole advantage of taking advantage and abusing women while ‘Babyboomers’ is exactly what you might expect… ‘sorry we’re fucked up, you made us this way, you have all grown up, you use us your ashtray’. A savage and intelligent attack on those who abuse their power, your father will hate it but your kids will love it.

Downstairs in Hoots my initial expectations and impressions of Luna the Professor are of mop-topped youngsters with guitars worn high which all pointed towards yet another derivative Arctic Monkeys/Jake Bugg clone. I was wrong. Yes, there are some obvious Arctic Monkeys comparisons you could make but they make it their own and play infectious high tempo indie-rock. Even their supposed slow number manages to bounce along at a reasonable clip and it’s all held together by a band who sound like they’ve been playing together for years despite only being formed in 2017.

Be Like Pablo had been out with the flyers during the week and it seemed discourteous not to pop over to the Mercure to give the happiest band in Scotland a listen. And that’s exactly what they are, if you like relentless cheery indie-pop with a slab of cheese on the side then these guys are the band for you. Their sunny nature is the perfect backdrop to the scorching weather we’ve had and the happy factor is set to a billion. Now being a cynical sort I did wonder whether they’re actually just taking the piss and there is something satirical here that I’m not getting, but apparently they are simply just that cheerful. All the time. I bet they’re a nightmare to live with.

Back in Hoots MALKA is ostensibly the latest project by Tamara Shlesinger, formerly of 6 Day Riot, and it turns out to be a fascinating and compelling set of tunes with a whole host of influences. She weaves in influences from across the world and while it isn’t necessarily what you would call World Music it certainly sits comfortably enough alongside that mash of genres. The primary focus seems to be to the use of beats, percussion and vocals to drive the music on with the rest of the instruments taking a back seat. There’s a tribal, almost primal feel to it which is neatly emphasised by Shlesinger’s wonderfully colourful outfit and head-dress. It’s one of the stand-out sets of the festival and immediately had me scouring Spotify for her work. I’m happy to say the studio records match the quality of the live set.

The final act for me in Mad Hatters was Ida Kudo from Denmark. She’s half Japanese, half Danish and another artist happy to weave cultures and genres together to get her own sound. She’s as visually compelling as she is sonically. She twitches, writhes and gesticulates to her music and isn’t afraid to leave the stage to get eyeball to eyeball with the punters. Like Malka downstairs in Hoots there’s a tribal quality to the music and she’s already considered one of the ones to watch in underground electronic scene in Copenhagen. It’s actually an incredibly difficult set to describe, the raw, almost visceral power of the live set isn’t going to have any justice done to it via a computer keyboard.