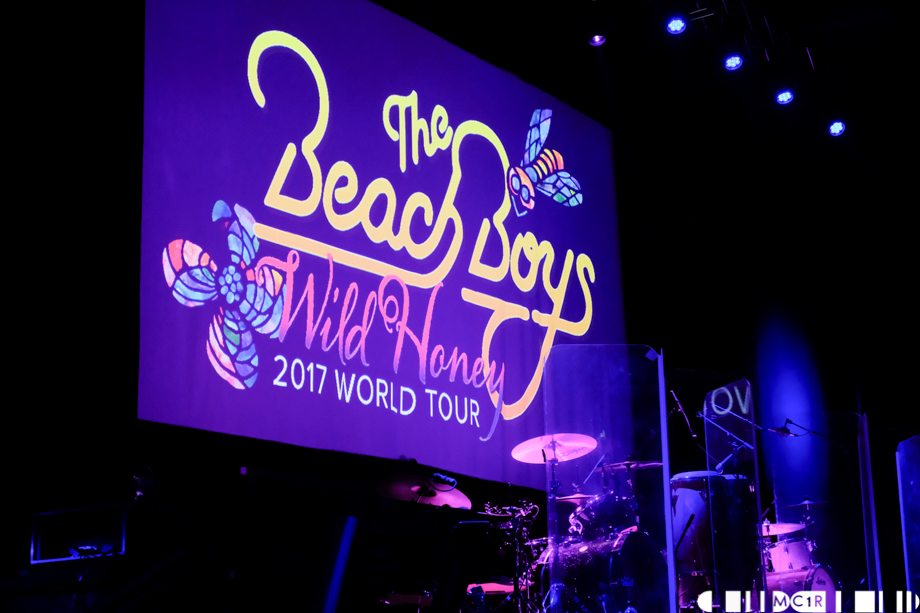 Formed back in 1961 The Beach Boys have a long and somewhat checkered history and one that to the uninitiated is a difficult to untangle and something that we don’t have the room to go into here. Suffice to say, like many bands of that era, they have had more than their fair share of tragedy, heartache and personal issues. Despite it all they continued to write and perform the finest perfect three-minute pop songs in music history and tonight’s concert is a testament to that as well as a celebration of the 50-year anniversary of the ‘Wild Honey’ album.

This reviewer was, perhaps cynically, not to mention unfairly, expecting the audience to mostly comprise of codgers on zimmers but it was in fact a good mix of folk across the ages and the atmosphere was akin to a festival with the main doors to the venue left open to allow people to filter in and out to the bar and burger vans outside. It’s a setup that works well and it’s a credit to the team at Inverness Leisure. Access is a doddle and parking a breeze even with the fun fair over on Bught Park.

I’d had a look online to get an idea of what to expect and was impressed by the sheer volume of songs they manage to squeeze into a two-hour set. For most of today’s bands a 40-something song setlist would be a challenge but the nature of your average Beach Boys tune is that most songs are done in that magical three-minute period. There’s no long drum solos and extended guitar breaks and the band are a tight-knit cohesive group that defies its years. Mike Love and Bruce Johnston are the only two remaining original members of the band (and even Johnston ‘only’ joined the band in 1965) and there could be accusations of this being little more than a tribute act. However, Love and Johnston have pulled together a band that compliment their heart and soul and if you close your eyes it’s not too hard to picture yourself by a beach in California rather than a humid sports hall in Inverness.

Opening with a quick potted history of the band on the screen at the back of the stage, the band quickly get down to business. The hits come in thick and fast, ‘Surfin’ USA’, ‘I Get Around’, ‘Wouldn’t it be Nice’, ‘Good Vibrations’ all get an airing and don’t sound like they’ve aged at all badly. Each song has the equivalent video played on the big screen and as you might expect there are plenty of surfer chicks in bikinis and the odd bloke in speedos clutching a surfboard (that’s not a euphemism you animals!). It all harkens back to a time where things were easier and happier, or so they would have you believe at least!

It is the perfect summery antidote to a fairly grim week when you cast your eyes back to Monday night in Manchester. A huge amount of credit and love should go to the thought that the band put into their tribute to this week’s tragedy in Manchester. Asking for us to pause briefly in silent respect to those who were killed and injured after the Ariana Grande concert, they followed it with a poignant video in tribute to those who died while they played ‘The Warmth of the Sun’. The biggest cheer during the song went up during the section on-screen in memory of Eilidh Macleod from Barra. Our thoughts and best wishes from Inverness Gigs go out to her family and of course all those caught up in the attack at Manchester Arena.

Along with the more well known hits, the Beach Boys throw in a few covers for good measure ‘Cotton Fields’ (originally by Lead Belly) goes down a storm and ‘Why Do Fools Fall in Love’ (Frankie Lyman) and ‘California Dreaming’ (Mamas and Papas) sound great.

I come away feeling that I’ve seen a band that are admittedly playing the nostalgia game, but doing it for the hell of it and because they can, rather than any less altruistic motives. Mike Love said earlier in the gig that as entertainers they see it as their job ‘to bring peace and love’ and I think it was clear that they did that and they still do it well despite their advancing years. It’s easy on the ear, light on the soul and you can’t say fairer than that now can you?

Check out images of the night below;