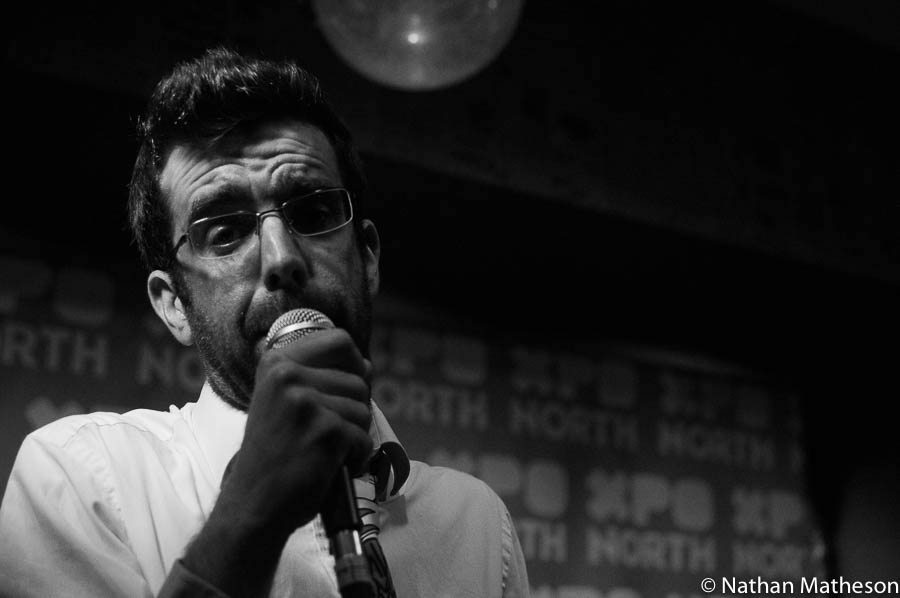 First up for me was local singer/songwriter Imogen Islay Hay in the PentaHotel. A stunning set from her as always, the combination of her voice and clarsach produces a haunting, ethereal sound. Unfortunately an extremely busy schedule meant I couldn’t stay for her whole set, but I was reminded just how talented she is in the first three songs.

Next up were local indie rock band Silver Coast in Deenos Bar. I’ve seen this band a number of times and I can honestly say they get better with every performance, the vocals get bigger and the guitars get louder! They truly do belong in a stadium setting. Charging through a great set of new and old material from their mini album “Seasons”. The crowd was enthusiastic and showed it in their participation. The lads gave it their all as always!

It was then a quick dash over to Hootannany’s to catch Edinburgh based duo, Posable Action Figures. Their set was greatly received by a rather busy hoots. They have a really interesting sound, unexpected from just a two piece band, a mixture of electronic music and indie rock. The pair mix awesome riffs with various samples and catchy hooks, which made for a set which really stood out for me.(find out more about the band by reading our pre-gig interview with them)

A quick breather and it was time for now, local legends, Spring Break. Ross and Ben were joined this evening by Ashley from Ashley and the Cosmonauts to provide some vocals. The placed was packed for their set as they have gained a huge following around Inverness and beyond. Playing through a highly fun an energetic set, Ashley certainly has a huge voice and Ross’ lyrics are get wittier by the day. Even if your not a hip hop fan, it’s impossible to not have a good time watching Spring Break. Once from the top, Tractor Tractor, Tractor Tractor……

It was then a quick jump upstairs to catch Brownbear. This man is incredible and maybe the bravest man alive. Opening his set with an accapella song was a bold move, but it sure payed off! Matt’s raw talent could be heard instantly, I was blown away. The rest of the set was thoroughly enjoyable, he really poured everything he had into his set and the audience loved it.

After turning it down a notch with Brownbear, it was time to turn things back to eleven with ForeignFox in the Market Bar. Award for the sweatiest set goes to ForeignFox, the band delivered a super energetic set to a packed Market Bar! The band has a super unique sound blending electronics synths and indie guitar sounds, which proved in an astounding set!

My last act of the evening was the ever incredible Bloodlines. They played a blinder of set to a stowed out Mad Hatters. The poured every ounce of energy and passion into their set and the crowd were equally as enthusiastic! I’ve yet to find a genre for Bloodlines, there are definite prog and math rock elements, which blend together to make something so unique, yet so bloody brilliant!

Photos of the evening are here and you can check out our XpoNorth 2016 page for more coverage.