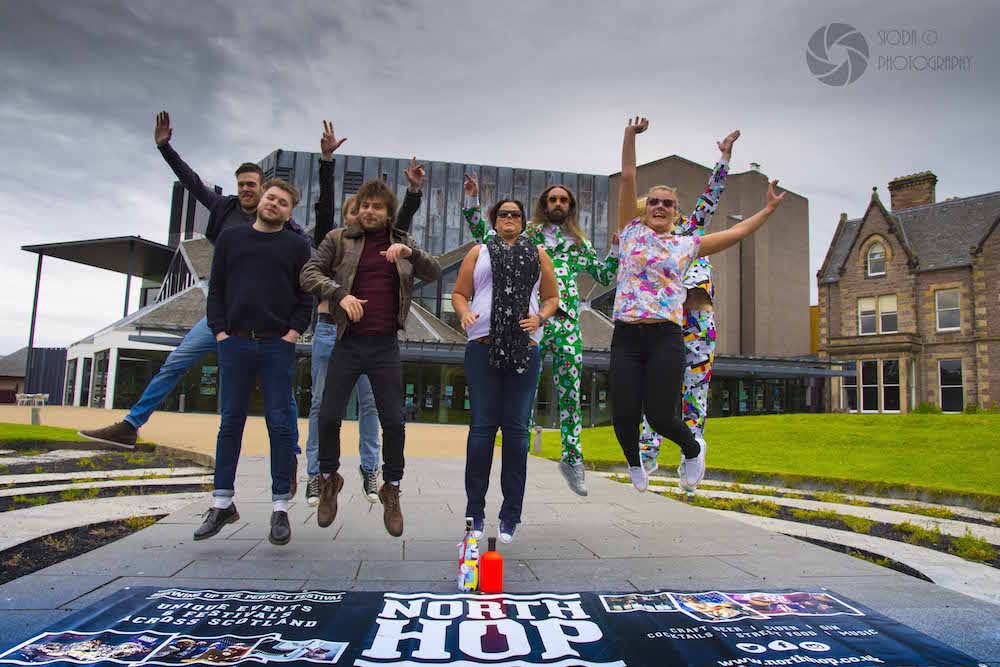 North Hop, the Highlands and Islands’ first large-scale indoor craft beer festival, which is now in its second year, is gearing up to welcome a number of top Scottish music acts to its stages this summer.

Last year’s festival welcomed over 800 festival goers with some travelling from as far as Canada and Norway, to get a true taste of Scotland by sampling the Scottish produce which was on offer.

Inverness four-piece, Lionel, has previously played at XpoNorth, Belladrum’s Tartan Heart festival and Glasgow’s Nice’N’Sleazy music venue and bar. The band has been dubbed unofficially as the one of the best-unsigned bands in the country by goNorth festival.

Meanwhile, Neon Waltz, a six-piece, who were recently signed by Atlantic Records, will be following up North Hop with an appearance at this years Reading and Leeds Festival. The band will be supported by a number of other top music acts including; Scottish band Me, Him & Them; acoustic acts Blair McLeod, Autumn Sun and Winnie; Aberdeen trio, Daydream Frenzy and DJ’s, Alan Grant and Johnny Wilson on the Friday evening.

Two bands in the festival line-up, Schnarff Schnarff, and Spring Break, have also recently been selected, from an impressive host of acts for the T Break Stage at this year’s T in the Park.

North Hop Organiser Michelle Russell, said: “We are delighted to welcome a number of new acts to North Hop this year, as well as a few familiar faces from last year’s festival line-up too.

“The acts are incredibly talented and I am sure festivalgoers will be excited to see them hit the stage in August. All of the acts have a busy summer schedule and North Hop will be the perfect way for them to end the season on a high.

“Scotland does three things extremely well – beer, food and great music, and that is exactly what we’ve got lined up for North Hop.”

Joshua Mackenzie, lead singer of Lionel, said: “ We are delighted to be headlining at North Hop for a second year running. It’s clear after a very successful first year that the festival has gained a good reputation and only seems to be growing in popularity.

“North Hop is a huge platform for us to perform at. Given the nature of North Hop being primarily a food and drink festival, we are performing to a variety of age groups and people who maybe wouldn’t normally come and see us play. We’re really looking forward to playing the gig in August and can’t wait to catch up with all of the exhibitors and music acts.”

The festival, which has just over 1500 tickets available for festivalgoers, is set to boast over 25 different Scottish exhibitors celebrating craft beer, cider, artisan gins, creative cocktails, and a selection of street food vendors.

The format is much the same as last year, the main hall featuring live bands and guest beers on tap and a cocktail lounge with acoustic acts lending a more relaxed air to proceedings. Michelle says that more time has been spent matching food with the drink and the menu will reflect that, food and beverage pairings being suggested throughout.

The guest beers will of course include local breweries, but there will also be an appearance by Weihenstephaner, a Bavarian brewery who have the title of being the world’s oldest brewery. Keep an eye out for Wooha Brewing Company, the micro brewers are based in Nairn and a relatively new outfit. There will also be a Scottish launch of a new product during the weekend, details are being kept deliberately vague at the moment but it’s sure to add a bit of additional excitement during the weekend.

We visited North Hop at their Aberdeen debut in The Lemon Tree earlier this year and it’s fair to say that they seem to have found a winning format. Our reviewer Frank Finlayson gamely sampling as many of the beers as he could all in the name of a  properly researched article.

Check out our previous coverage of North Hop.