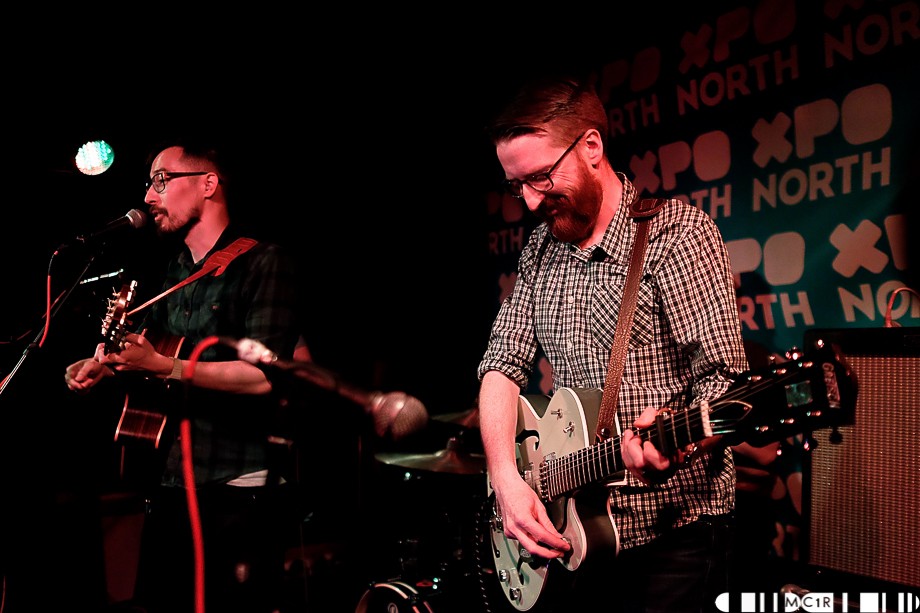 Searching for Donkeys kick off two days of music in their usual exuberant fashion. Graeme Gilchrist’s flowery shirt the only thing threatening to overshadow their shimmery, summery, cheery indie tunes. They’re in fine fettle and it’s gratifying to see a healthy, rowdy crowd in The Room soaking it all up and enjoying the music.

The ubiquitous SFD Frisbees make an appearance and seem to follow me from venue to venue, the odd one skimming across audience heads to land at the feet of bands on other stages across the city. Frisbee Marketing, they could be on to something there.

A quick hop across to Mad Hatters and The Great Albatross generate a bit of a buzz after their set of big anthemic Americana-ish tunes that built to a crescendo. The vocals souring from time to time as he didn’t quite grab those higher notes but really a minor whinge when you take in the set as a whole.

An American couple beside me who had arrived in Inverness on holiday from LA that afternoon were suitably impressed, even going as far as saying the music was of a better calibre than you’d find at SXSW…!

The Market Bar is always one of my favourite venues during goNorth/XPONorth, it’s usually rammed, sweaty, noisy and you’re often literally on top of the bands as they play. Bloodlines increase the sweatbox levels by several notches and deliver thirty minutes of sodden blistering noise. The Fort William band describe themselves simply as ‘rock’ on their Facebook page.

That seems overly simplistic, there’s a few prog influences evident, timing changes aplenty and a definite aversion to the traditional (and boring) verse-chorus-verse-bridge-chorus-widdly solo formula that all too many bands stick to. No blood was shed but there was plenty of sweat and gutsy effort.

I’ll be honest I wasn’t going to bother seeing Bongo Club and my only reason was that I didn’t like the name. Stupid boy. Never judge a book by its cover and a band by their name is a lesson I should already be sticking to, but every now and then I’m near hoisted by my own petard.

Fortunately one of our photographers caught me wandering past Hoots and he shouted ‘Get in there and see Bongo Club, they’re bloody brilliant!’ And they were. Boundless energy, a bastardized version of 500 miles, on (and off) stage theatrics and plenty of charm all helped pull in a large crowd of enthusiastic onlookers.

Upstairs in Mad Hatters Le Thug conspired to baffle and bemuse. Squalling guitars, barely audible vocals and a fairly samey, sludgy set didn’t really leave any lasting impressions. Usually bands that borrow from artists like The Cocteau Twins and Curve would pique my interest but the poor sound quality detracted from any real enjoyment.

Vocalist Clio Alexandria looked bored and like she wanted to be anywhere but Mad Hatters, whether this was affected boredom or actual boredom was anyone’s guess though.

On to Declan Welsh in the Phoenix. And I have to say that I don’t like him, not one bit. Horrible little man. He’s young, talented and better looking than me. Utterly hateful. Let’s get to his ‘music’, he dares to be lyrically inventive, witty and the wee shite even raps from time to time.

He’s kind of like a punked up beat poet, which we all know nobody has ever succeeded at. In seriousness there are the odd forays into Mod/Oasis style noodlings but for the most part this is a young chap who knows his craft and is staring down the barrel of a very bright future. Still don’t like him though. Wee git.

Lionel ramp it up