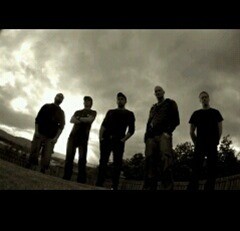 We catch up with Seed of Sorrow as part of a series of interviews with acts that are playing the Ironworks Summer Showcases.

Seed of Sorrow are a five piece death metal band consisting of Lewis Goodwin (vocals), John Murray (drums), Mark Savage (guitars), Nick Laidlaw (guitars) and Donald Tolmie (bass). The guys are “dedicated to producing the hardest, angriest brand of metal possible” and over the three years that they have been existence have have played locally, occasionally venturing further afield.

Recently they have supported  Funeral for a Friend at The Ironworks, an experience which the band relished; “It was ace… [the] guys were good banter backstage and many beers were had.  We all had a really awesome time on that stage and the crowd enjoyed us even though we’re not everyone’s taste but we look forward to playing a big show there again.”

The band, of course, return to The Ironworks for the Showcase on the 8th of August, when they are using the opportunity to launch their EP ‘Vice Like Grip’. On talking about the EP, Lewis explains “We took a long time making the record but it was worth it, I think. Our music is very aggressive and so is our live sound and stage presence so we really wanted to capture that.” As for the inspiration behind the material they explain; ” Lyric wise our songs cover subject matter ranging from punching the f*** out of people, to the pointlessness of existence to the destruction of the earth by the very people who claim to be improving it.”

The album has already received praise by Extreme Metal magazine Terrorizer who commented “This Inverness brigade put plenty of technicality into their death metal, but the focus is very much on smashing the shit out of stuff, not showing of their widdely bits.” The band were appreciative of the praise; “Positive reviews are always great they let you know your doing something right and to have one from such a big magazine was amazing and a personal goal for most of us.” They were also clear it may lead to other things ; “We left on great terms with their managing director so there may be more in store in the future.”

On talking about the Death metal scene, they comment “It’s not great up here, but it’s getting better the further down south you go the better the music scene gets”. You get the feeling that the band are willing to push through the challenges indeed after the EP launch they are keen to build on the momentum ; “We’re really trying to land a festival gig, get a record company on our side and there are talks of a Scottish tour next year.”

Tickets for the Showcase are available via The Ironworks or from the acts direct.

Please checkout our coverage of the Showcases including reviews and interviews with other acts.