A review of Marc Fender, Spoke Too Soon and The Winter Tradition at Invergordon Arts Centre Friday 14th of June 2013.

You have to applaud highland venues for the effort they put in to providing us with access to such a fine variety of quality live performances, and The Invergordon Arts Centre is no exception here. This is a venue that was on its uppers and has been nurtured back to life by, among others, Invergordon Live. It is a fine traditional theatre set up which promises – and delivers – good lighting and great sound and this in a relaxed comfortable setting with room for a mosh pit if you are so inclined. No I’m not making that bit up, read on. 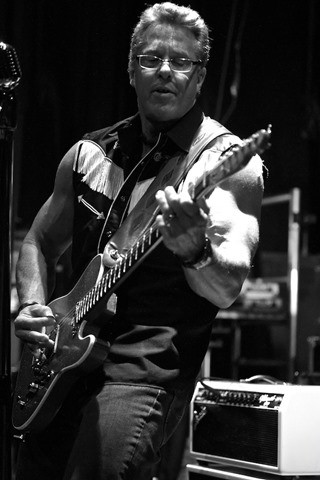 First on stage this evening was Marc Pendergrast and his own unique take on Rock and Roll Americano (which just happens to be his aka tag). Essentially we were treated to cover versions of classics from the 50’s and 60’s (if you gloss over the Stray Cat’s ‘Rock This Town’ from 1982) all performed with some enthusiasm by this six-foot plus Californian. Marc has gone for the full look here, vintage mic, fringed rockabilly shirt with no sleeves, sparkly fender guitar and some lovely amplification gear in white. ‘Rock This Town’ was joined by Chuck Berry’s ‘No Particular Place To Go’, and of course Elvis entered the building in the guise of ‘Mystery Train’ – you get the idea.

Marc can play a bit and he has a decent voice but for me there was something missing – drums and a double bass for starters. To be fair he also delivers this material with a band but I’m bound to say tonight’s performance wasn’t for me. It was an Elvis wig short of a novelty act and not refined enough to truly stand-alone. What has to go down on record though is that the Clapometer would suggest the crowd would disagree with me; they clearly enjoyed this performance. Perhaps as a bald man I was simply suffering from quiff envy. 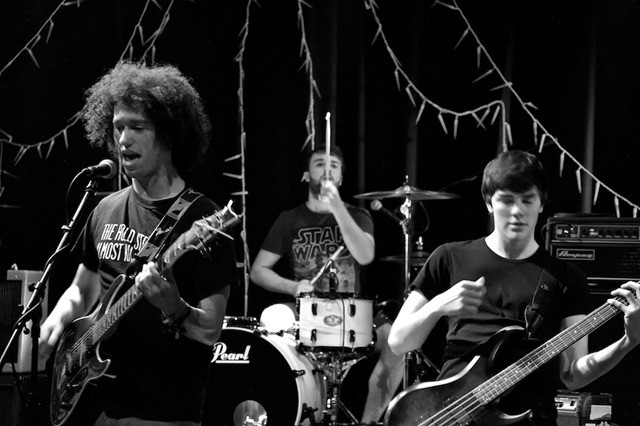 Next up local band Spoke To Soon really did rock this town. I had a sense that – without being overly partisan – a fair proportion of the audience had come specifically to take in their set for tonight. And they weren’t disappointed. To my ear, what was an eclectic mix of rock, metal and punk, sometimes all in the same song, kept me on my toes. Lead guitarist and singer Joe Stainke’s voice might not be the strongest, at times it threatened to wander off and send a postcard, but it has a unique quality to it that by the end of the set I liked. Indeed ‘Sideways on a bus’ had me reminiscing about some fine punk and early indie from the 70’s and 80’s (I’ve set myself a challenge of mentioning every decade from the 50’s onward in this review). He delivered straightforward adolescent angsty lyrics (no profound poetry going on here) with some vocal support from Hunter MacKay on guitar and Kieran Auld on drums.

The only un-rock ‘n’ roll moment of the set belongs to Kieran who ripped off his t-shirt only to put it back on a song or two later, presumably it was a bit nippy at the back of the stage. Meanwhile the bass player Ruri Murray fulfilled the bass player stereotype by being the cool quiet(er) one. That said, in between kicking the shit out of an array of pedals there were moments when they were relaxed, or enthused enough, to let a very watchable performance break out – maybe more experience or confidence or whatever will see more of that in the future. 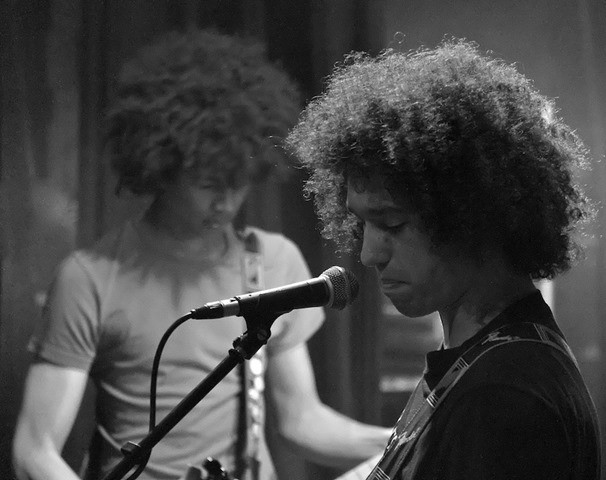 Moving on, I think the true spirit of punk was evoked in their own confessional moment along the lines of ‘it was good that we hadn’t heard their new song before because at least we wouldn’t know where they had messed up’. Not being overly familiar with any of their songs I have no idea if and when they messed up and apart from the song mentioned above highlights for me were ‘Would You Mind’ and ‘Doom’. Currently busy with a fair few local dates before heading to Stirling at the end of the month, Spoke Too Soon are well worth catching live. I might even pop in to the Jubilee Hall in Evanton on the 21st June; or I might just leave my front door open, they are loud enough.

A name that in its self made up for any lack of poetry from the previous occupants of the stage. No story behind the name, they just liked it, and I have to agree. What is more, it suits them in that it is difficult to imagine them being called anything else. It was a good call to ditch The Void which was their previous band-name and which for me conjures up images of emptiness, hopelessness and darkness; because on the strength of tonight these guys are anything but: they are warmth and hope and light writ large in sound and look and lyric. And I guess that is good news, because they have recently taken the leap to a full time set-up and there is clearly some investment going on here. Whether that is on the strength of consistently strong reviews or in a belief and confidence in their own ability with one eye on consistency and longevity remains to be seen, but on tonight’s showing they clearly have the ability and I can only conclude that those previous reviews are well earned and rest entirely on merit.

Describing themselves as an alternative rock band, what struck me most were the more melodic, pop, anthemic moments: think Elbow’s 2008 ‘One Day Like This’, but without the strings, and you’ll be close enough. The rock is certainly there – in announcing that ‘this will be our last song’ there was a shout from the crowd of ‘Let’s go mental!’ and they did, with an at times up to four man (!!) mosh pit letting rip. But here’s the rub and a big hint to the bands approach to song-writing; one minute mosh mayhem, next minute they slow it right down and a new dance genre ballet-mosh is born; wind the video on and guitarist Mark Morrow joins the pit, in true rock and roll fashion, he is rolling on the floor. 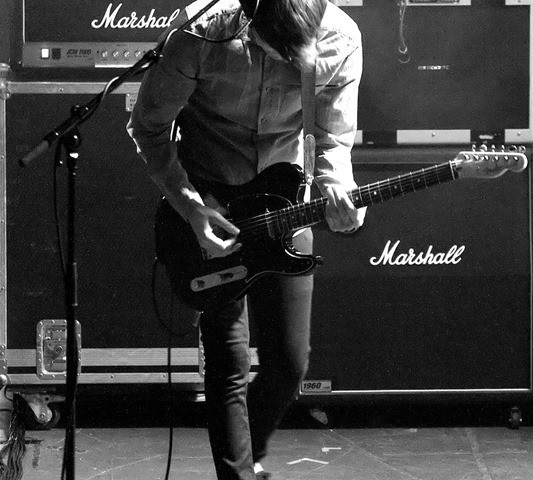 It is those very same song-writing sensibilities, the variations in tone, pace, volume and intensity that I think might well set them apart from any number of other bands around at the moment. Because I would suggest that they have much in common with their contemporaries, say for example Kassidy or Anderson, McGinty, Webster, Ward and Fisher. They certainly have in common the fine lead vocals, the close harmonies, sophisticated lyrics and well crafted songs, not to mention that good look; so it is in reality only fine margins that separate them from the others. What better place to start than with memorable live performances and song-writing with a distinctive style? They were good value for money tonight, they are taking themselves seriously and for me ‘Black Tiger’, ‘Gradients’ and ‘Tides and Telegrams’ – ‘If we can find dry land, we’ll grow old together’ – shone brightest this evening.

The positive reviews continue and I’m prepared to bet they will for some time to come. But don’t take my word for it, get out there, go see them, buy their current CD ‘Gradients’ (released December 2012), you will not be disappointed. Joining Mark Morrow on the floor tonight are Stephen Furbanks also on guitar, lead vocalist and bass player Euan Simpson and Callum Mouat on drums.

Please don’t write in, I know I didn’t manage to mention the 90’s.