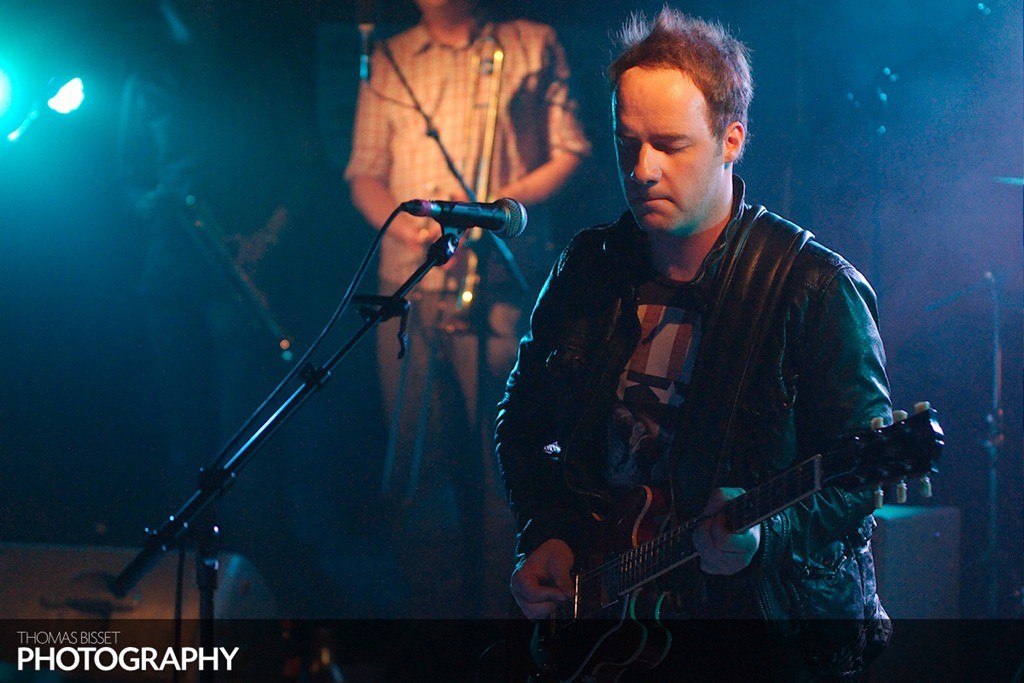 It’s been over a year ago since my first interview with KOBI, and I took the opportunity to meet up with KOBI and discuss what’s happened in between, future plans and what makes music awards shite. 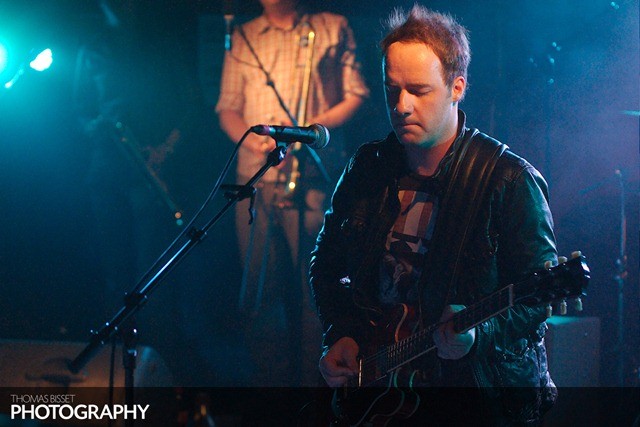 In terms of their achievement over the last year, Steve Robertson, the band’s bass guitarist, was upbeat. “I would say the very idea of us playing Belladrum, when we were the first band, was a no-go, and now, not only to be on the main stage but to be part of the BBC Alba footage, that is national coverage.” Drummer Dave Smith is equally enthusiastic. “It more than surpassed our expectations.”

Other than the hard core of Steve, Dave and vocalist/guitarist Gary Thain, the band have had a changing second guitarist. As Steve puts it. “We are destined to be stuck with each other forever, until the end of the world, after that we’ll be stuck on the gates of heaven together. We do have a second guitarist, who will be unveiled on Friday and he is only helping out for a while again. It’s like a revolving door. There has always been someone who is willing to say ‘yeah boys, I’ll do it’.” Steve also revealed that the brass section was back and bigger than before with elements of Rooty Ma Toot, The Skyhooks and Andrew of the Leonard Jones Potential returning. Steve explains, “It’s a little more funky now”. Dave expands further noting that  “It brings a completely new dimension to the music. It’s hard to imagine the music without them now to be honest.”

When it came to influences that brought about the introduction of the brass section Steve admitted that it was “because me and Gary got drunk at Rockness, thought it would be good and I sent texts to people asking if they would be up for it.” Gary adds, “Drunkenness leads to everything in this band. All our best ideas come from when we’re drunk”

With the release of the second single imminent, we turned to talk about the first single Fight and the reception it had received. “I’m proud of it, and how it sounds”, says Steve,”and how it was done low key.” The forthcoming single All The Way has been promoted as early as January in advance of its release on Monday 22nd of April and the feeling within the band is that it is “pushing the bar”. In Dave’s words, “It could be a game changer for us”. Steve puts this down to their personal confidence and that “since Fight the band has moved on musically. There is a bit more pop than pomp”.

If this leads to commercial success, is what the the band want? “Wouldn’t say no to it!” says Dave. Steve expands and says that it wasn’t on the agenda when the band came back and talks of success in terms of high profile gigs last year at King Tut’s (twice) and festival appearances at Belladrum and Rockness. In terms of festivals this year none have been booked at the moment, and although he says it is something they would like to do, it would not be the end of the world in their opinion. Steve puts it simply. “Nice to do, but not essential.”

Another non-essential would appear to be industry awards as we chatted on the subject. With a bit of laughter, Gary proclaimed “They’re great if you get an award, but shite if you don’t! So they’re shite at the moment.” They did remember the Netsounds award that they picked up just over a year ago, but as it wasn’t repeated this year they reckoned it was shite now. In fairness to Netsounds, as pointed out by Steve, it wasn’t awarded at the end of last year.

Mention was made of a forthcoming album. This was a plan shelved from last year as they felt that although they had the material, they didn’t feel that it had the quality at that time. Steve adds “I feel that it is there now, that is the aim for this year. That is ahead of festivals.” Gary finds it embarrassing that they have only two recorded songs out in their time together. But it’s a question of finance explains Steve. “We like to do things to the best that we can afford and that sometimes means delays in doing stuff.“ For KOBI it is a priority this year, as Steve explains, “I would rather concentrate on getting an album recorded, and doing some singles, and some dates for that, and play no festivals this year. We can play festivals on the back of a successful album next year. I don’t see the point if there is nothing to promote.”

The aims of the album are big. There is debate that older material, including first single Fight, won’t make it on. Ultimately they want an album that they are all happy with. It is clear that they have learnt over the years. From the early days of over 50 gigs in a year playing the same songs with little time writing, they have a strong sense of direction, with all pulling that same way.

Talk turned to Gary stepping back from his role in Toby Michael’s Rolling Damned. Gary opens up and says, “To be perfectly honest I got burnt out., I’d lost enthusiasm for almost all of it, and I knew I needed to give something up.” Dave then jokes “we took him down an alleyway and told him that it was us or Toby”.

Gary also explains his song writing technique. I made a conscious effort to write pop songs, because I found myself really depressing. I was thinking I can’t listen to this anymore. I thought how about writing in major keys, everything was in minor before then, so I ended up writing some decent melodies which I hope will come out imminently.” He draws influence from the likes of ambient music that he listens to, and has ideas jumping out at him at the most inopportune of times. Gary explains. “I find myself in shops” as he holds his phone up to his mouth, “recording a little melody.” All this while receiving a few strange looks. This in turn fuels Gary’s perfectionism. He has always been listening to feedback within the band and is flexible with their input, “I wanted to be collaborative but the more confident I get, the less I want to give it away to the boys, but it is something that I had to compromise with.” Gary sets high standards for the band, and himself. Dave reveals that he was travelling to Wick and listening to recordings that they had made of All The Way, and there were five different versions of the lyrics, as Gary sought lyrically to achieve what he was ultimately aiming for. All The Way is a song which Gary relates to. It’s “personal, and people can relate to it as well, it’s really quite a depressing song in an upbeat style!”

As well as having been carefully put together in its execution, the single has also had a meticulous release. Steve talks of the two current promo dates, Friday at Mad Hatters, and Glasgow’s Nice ‘n’ Sleazy on Saturday, with more dates in the pipeline for April. Also, for Steve it is about “doing it properly, to a standard, and if we’re talking to anyone that is semi involved in music they will say; these guys, always on time, got a crew, always professional and polite. We did that in the old days too.” Gary laughs and adds “But the material wasn’t there, or the performance”. But as Steve says, there is an “effort to make it happen”.

When it comes to what they call success they feel that they are a lot like everyone else. They want to reach out to more people. “If we see people at gigs that we don’t know enjoying the music then we are making ground. That is our short term goal.” says Steve, and each take that simple pleasure when someone who they don’t know takes the time to tell them that they enjoyed the gig.

So what can we expect this weekend? They don’t want to oversell it but they think if people come down they will see for themselves. It not just KOBI, it’s KOBI for 2013.

You can follow them at the KOBI Face Book page.