Red Ronson talk to us before their Easter Showcase gig at the Ironworks, Inverness on the 31st of March. 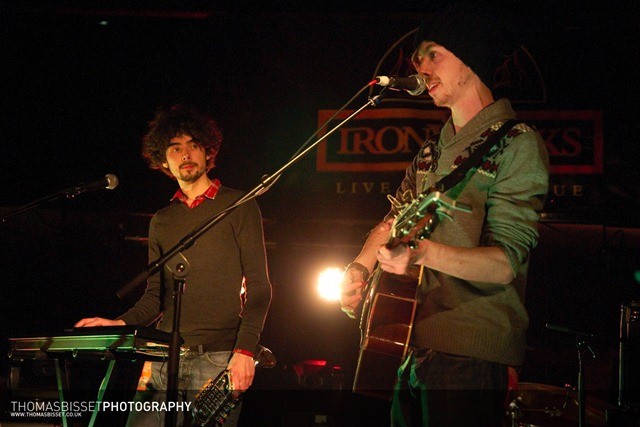 Given your forthcoming and much anticipated appearance on Come Dine With Me, how bored are you with being asked about when you will be on the programme?

I’ll probably get incredibly angry at the next person who asks me this….

When are you going to be on Come Dine With Me?

Who is Red Ronson, and how did the band come about?

Red Ronson is like that scene in Spartacus… you know “I’m Spartacus”…. “I am Spartacus”… etc etc. it means what you want it to mean, it could be an old American busker that i met while travelling, a known faction of an imaginary guerrila government or just a silly old cigarette lighter i had once. but i think the answer you are perhaps looking for is – me, Iona MacInnes, Dave Ramsay, and Ally Duncan

How did the band come about?

It just kinda did, I think when a gaggle of musicians spend a lot of time together either socially or professionally its only a matter of time before one of them says”hey I’ve got all these songs how would you like to play them with me”.

You’ve used folk-pop as a description of your music, how difficult was it to pin point your genre?

It is incredibly hard to pin point a genre in general just ask ‘HMV’, they’ve given up even trying and now class everything as rock or metal… I still don’t know what our genre is to be honest sometimes I write a song that i think could be classed as punk, other times i write a song and class it as pop, or folk… folk pop or anti folk seems the most appropriate genre for us at this moment but I dunno maybe come and see us and decide for yourself its all relative really… until we are famous and then we’ll let the big guns decide on our genre… rock?…. or metal?

There certainly appears to be a quirkiness in the band, whether that’s the song and video for “Sweet heart be Mine” or dressing up as super heroes, how are the ideas built in the band?

I’m insane… not dangerous i don’t think, but yeah definitely a bit mental… I sit in a room with the guys and I’ll have a ridiculous idea in my head about something creative and fun and I’ll debate whether or not to say it for what seems like hours. but I always end up saying it and mostly the guys will agree and add a little extra crazy to the idea. I guess we all like to have a laugh and be silly and cheeky and childish, I don’t think having that mentality and making serious music have to be mutually exclusive.

Red Ronson appears to have been on the go for ages, although there seems to be a bit more direction at the moment, what’s given the band a bit more impetus?

If impetus means what i think it does then… viagra.- Seriously though, yeah I’ve been writing and gigging solo as ‘Red Rfor a few years, and it was quite a selfish thing in that it was my equivalent to therapy, if things were going wrong I’d write a song and I’d be happy… or at least less angry. but that was really quite a lonely existence so I decided to do the whole ‘yes man’ thing and carpe the shit out of the diem, managed to get some brilliant musicians that I respect and love and after playing together a few times thought…. if we’re gonna do this we might as well do it properly and reach for the stars and climb every mountain high.

How are the plans for the album going?

Very good, the albums the easy bit its more trying to get it out and into the public domain. But that’s the fun part that’s where we get to be silly and creative and cheeky so watch out there’s probably nothing we won’t do to get you’re attention.

You return to the Ironworks for The Easter Showcase, what’s the plan for the gig?

The plan… have fun… and get our tunes stuck in the unsuspecting heads of future fans. We might have a few fun theatrics up our sleeves too..

If you only see one band at the showcase this year what’s it going to be and why?

I’m keen to see them all, many we know and some I look forward to hearing for the first time. I  hope that everyone has the same idea… to only see one band when there is such talent and variety over the two nights would be an awful shame.

What’s next for Red Ronson?

We really just don’t know… that’s the fun of it… we’re just gonna keep being cheeky and aiming high this time next year we could have a Brit award, or we could be busking in the high street… I think either way we will have a had a hell of a year and i hope we are still happy.

Tickets are available for the Easter Showcase from the Ironworks.