Skeleton Verse return to Inverness to play Market Bar and Hootananny in October. The alternative metal band ,formerly known as The Paradox, caught up with us to talk about the gigs and their new album, “The Storm before the Calm”. 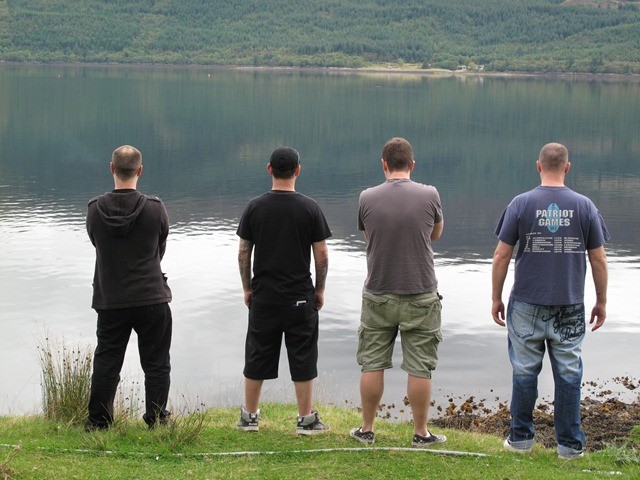 Given your sound it seems a really appropriate album name, how did you come up with the title?

A lot of our band’s previous lyrical content came from my personal stuff and using music to exorcise my demons. When we started the new record I wanted to represent a bigger scope and make the content more about what’s going on in the outside world. I started thinking the way things are going the world is going to end in my lifetime and I couldn’t shake that thought,so the lyrical content on the LP is a reflection of a world gone mad really.

Can you tell us a bit more about the forthcoming release of the album ?

We released VOL I in February because we changed our name  and didn’t see sense in releasing a full LP so we split it into 2 EPs VOL I & II. The 1st volume was basically to get the name out there and the release of the 2 of them combined will bring the LP full circle. I wrote “BRITANNIA:rule cool fool” as something else and the subject matter was originally on the Greek riots and why it hasn’t happened in Britain. Then a couple of months later it did in London so I changed the song,then after that Union Jacks were everywhere for the Queen’s jubilee then most recently the Olympics,which confuses me as the UK is a nightmare to live in and people are still acting patriotic,its stupid to me.The rest of the LP has quite varied subject matter regarding the world and a song for our hometown called “Fort Knocks”.I feel my band mates are all masters at their craft and we are extremely proud of the record we have made.

When you are developing a song, how does it normally develop from within the band?

We try everything really,we can build a song off one riff, build a song of one set of lyrics, demo songs in bedrooms, on our song on the LP “The Storm” we just said to our drummer ,Stoney, to start playing something mad and we all ran off that. James(guitarist) started powering away at riffs, Bru Brongo (bass) started doing the same.  I started free-styling, as I come from a Hip Hop background, and we basically had a full arrangement there and then,on the LP that song changes course about 12 times, I fuckin’ love it!

We are lucky enough to have you visit the area twice in a couple of weeks, what’s  the draw of Inverness?

When we book our gigs we always start with Fort William/Inverness/Glasgow,we have had some wicked nights in Inverness and love playing the Market Bar,we are a band that like people in our faces when we play,our shows are a bit chaotic but everybody is a part of it,when we play the Halloween night in Madhatters there will be partial male nudity!!

With you album launch you are bringing with you a trio of support acts, how do you go about picking acts to come with you?

I run Fort Knox Promotions,a small gig booking company for various venues in Fort William, Great White Elephant & Almost Fatal have done gigs for me in the past and put on great shows,Hector Bizerk from Glasgow done a show for me in August and I became good friends with them after the show and plan to work on material with Louie. After Hector Bizerk’s gig in Fort William they went on to play T in the Park,Wickerman Festivaland sell out King Tuts Wah Wah Hut (which is still the best show I have seen this year), so I’m really happy they are playing for me.That night you will have an alternative metal act (Skeleton Verse), a hard rock group (Great White Elephant),a hardcore punk group (Almost Fatal) and Hip Hop live act (Hector Bizerk) ,all for free,so get along to the Market Bar!

What song for you guys best represents you as a band, and why?

Probably “17 Ways to Lose your Marbles” it has a bit of hip hop, a bit of metal, a bit of punk, some shouting, some rapping, some screaming, 13 killer riffs and is always fun to play live.

What’s with Lorraine Kelly (following a notable fixation on their Facebook page)?

She’s a fox that rocks,the nation’s godmother and has come to bed eyes and thighs

Have you anything else to plug?

We will have T SHIRTS for sale as well as the new LP,along with signed nude pictures of our bass player from our calendar shoot last year!

Skeleton Verse will be playing the Market Bar with support from Great White Elephant, Almost Fatal and Hector Bizerk on Sunday the 21st of October from 8pm. They will also be playing as part of the Halloween event at Hootananny on the 31st of October.