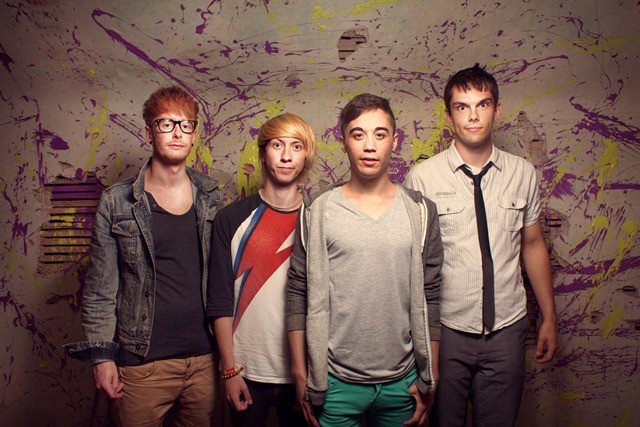 The Stirling based trio are renowned for their contemporary indie pop or “dramatic indie-pop” (Vic Galloway), “ridiculously infectious indie pop” (Electric Panda) or “pure undiluted indie pop” (Rhythm & Booze), you get the idea.

The band first came to attention in 2009, when their track ‘(I Wanna Watch) Top Gear’ gained Radio 1 airplay a fact make more astounding as the band, not fully formed at the time, had not played live. It is the clear that the band have continue to evolve “Since that early demo got air play we have released three EPs over a couple of years, which has helped us to find our feet”. However there is also a real sense that they are ready to move on “We’re almost at a stage now where we would like to start running with said feet, so long as the ground is right.”

There imminent EP, Turn It On , in many ways echoes that sense of confidence with recording happening over a significantly shorter period which has also paid dividends in other ways. “It’s the first EP that we’ve recorded over a couple of weeks, the previous two were done between long intervals over 9 months or so. We liked this way of working as it gave a lot of time time to review, but this time we wanted to try something different, and we feel we have captured a new energy.”

The sense of progression is also important for the band, when talking about EPs, “ we have always wanted the current one to be better than the last, so apart from production, mastering, manufacturing and artwork, that obviously means better songs.”  The combination that the band are looking for in their tunes appears to be that blend of both past and present: “if it’s both relevant to what’s going on now, and has a healthy nod to our 80s forefathers” but add “It should also have at least three hooks, standard.”

“Next of Kin” has recently been remixed by local producers Them & Us after meeting with Mark  and Liam  at goNorth, the band explain “ (we)thought it’d be a cool idea to get a remix going and throw it about the Internet. We are really impressed with the results. Very talented, but scarily young, guys!.”

Of course goNorth was not the only visit up to the area this year, having played Ullapool,Invernessand the Black Isle Brewery, despite a few issues with the road up north, when asked what brings them up the A9 they reply “Definitely not the A9 death-trap itself! We’ve been pulled over by police twice and even by a guy doing a survey! But we do love the places at the end of it, having visited Ullapool,Invernessand the Black Isle Brewery. I only wish they’d build a dual carriageway.”.

It is clear at the moment that the band are happy risk death and police searches to promote the new EP, which has been well received in their very recent tour south of the border. “Our hopes are for people to really get into that (EP Turn it On). It goes up for general sale on 5 Nov and all money goes towards the next release, which will be our biggest yet (hint, hint).”