Sunshine, sunshine and more sunshine. This is what Loopallu should be like. After a few years of pretty cold and dreich weather, the Loopallu 2012 organisers would have been delighted with their quota of sun over the weekend.

By Friday lunchtime, it was already a very chilled campsite. The weather, the anticipation of the last festival of the year, everyone was just happy and raring to go. The Ullapool Pipe Band are the traditional openers of the festival – skirling their way through the campsite and leading the throng to the main stage. It’s a good idea. There can be no-one in any doubt that the festival has started and the early bands are guaranteed a good crowd. 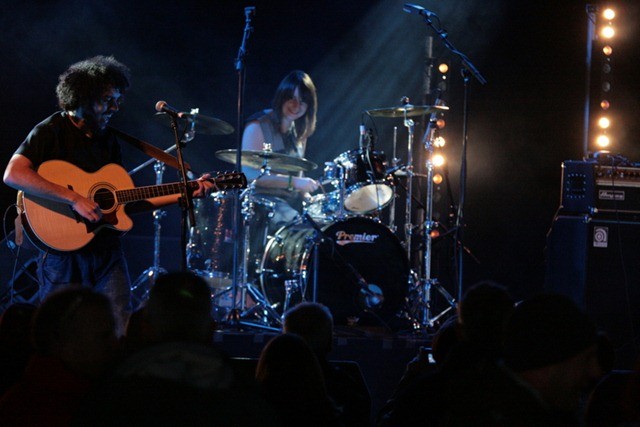 Brown Bear and the Bandits started off the proceedings proper. A three piece band, hailing from Largs, their acoustic styled instruments belied what is actually a pretty raucous sound. Although the first act is a pretty tough gig, the boys (and girl) were in no mood to compromise. They have already racked up a number of notable gigs in the last year from T-break to King Tuts and on this evidence are sure to continue to impress. 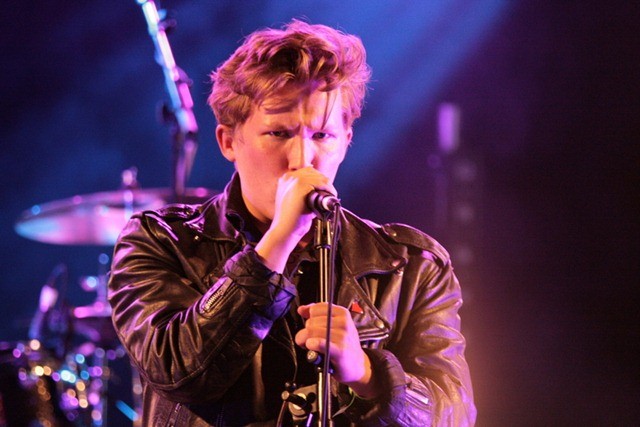 Next up, The Blindfolds brought a retro vibe with their quiffs and a rocking sound somewhere between rockabilly and the Doors with a slice of classic rock thrown in for fun. I put a spell on you was a strange choice of cover but in best X-factor tradition they completely made it their own. You’ve just got to love a drummer who gets so excited that he needs to stand! On a more critical note, some stagecraft and banter would make a better rapport with audiences.

Anderson, Ward, Webster and Fisher were the first band who people would have been specifically going out of their way to watch. And they did not disappoint. Multi-instrumentalists all, these young men have talent, great music and … Next morning, I had a quick chat with Anderson as they were heading off to a gig in Glasgow. He was clearly delighted by the audience reaction and was hoping to be invited back for next year.

I have to confess that I managed to miss Manran. I have been advised that they were smashing and that I should have been there! Oops. 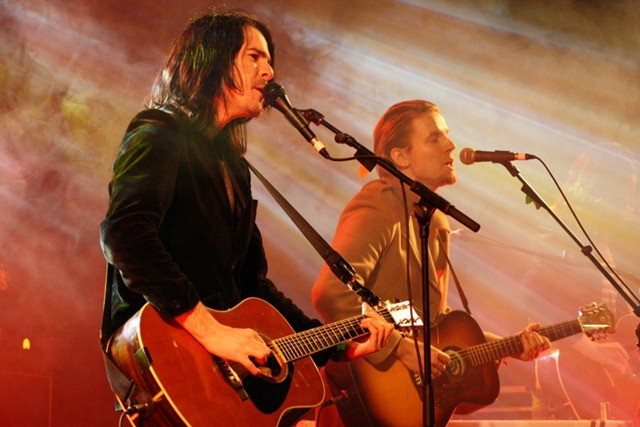 Kassidy, however, were unmissable. They are becoming intrinsic to Loopallu. Not only an outstanding main stage set but also a secret (in worst kept secret in Scotland kind of way) gig after hours in the Ceilidh Place. This was perhaps the first set where the crowd were just wild. Singing, whooping, dancing this was an outstanding set by a band clearly on fire and loving it. 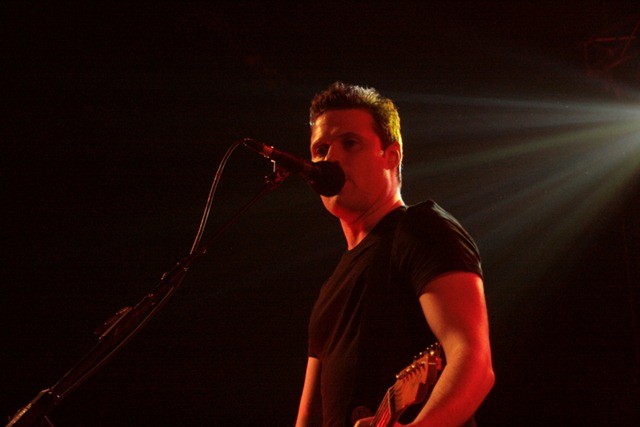 The newly reformed Fratellis too shone, though perhaps not so incandescently. Sure, the hits were all there. Much of the set culled from first two (excellent) CDs, just perhaps a few too many lulls with less well known songs.

And on to the fringe we sauntered. A small welcoming town in the Highlands chock a block with bar venues is Loopallu’s unique selling point. The 2,500 sold out crowd were joined by ooh, probably the same again for free entry to see everything from local acts to headliners. My choice was The Lorelei in the Arch Inn. All the verbs work – exciting, pulsating, thrashing. They were just magic and my favourite band of the festival.

Over the weekend, there was acoustic punk from Davy and the Hosebeast; Transgender Ska – perhaps you shouldn’t ask; Rachel Sermanni with the Staves helping out; DJ Vic Galloway; Grousebeater Soundsystem and more. Late nights at Loopallu are something to behold.

Ullapool’s own Naked Strangers and Dundee’s Miniature Dinosaurs opened day 2… and I am ashamed to say that I didn’t get there.

Next up, Lilygreen and Maguire are far from being a typical festival band. However, their smooth and quite beautiful pop music went down a treat. It didn’t hurt that the boys are very charming and engaging. Keep an eye out for these guys, though perhaps not at Rock Ness!

There can be no-one left in any doubt that Public Service Broadcasting are a band unto themselves. Comments ranged from “a bit niche” to outstanding” but anyone in the tent will not forget the screens showing the 50s propaganda films that the duo set to music. A listen to their EP – The War Room confirms to me that the music can stand alone, but check out Youtube for some amazing and thought provoking music/clips. 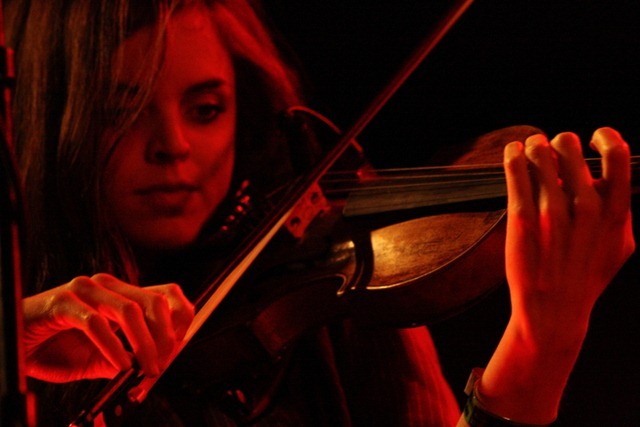 And so to the next extreme were the lovely Staves. Three sisters from Watford, who have had an amazing year – touring America, UK, Ireland and the festival circuit. They have a very simple stripped back sound – a guitar, a ukulele and three just beautiful voices. They have a CD coming out in November recorded by Glynn Johns (of Eagles, Bob Dylan, The Who and anyone else you can think of fame,who came out of retirement to do this CD).  The small crowd were treated to lush harmonies and gorgeous songs, but a small crowd was what it was. Perhaps a little like Rachel Sermanni who played a later – again spectacularly good song writing with a seriously classy CD. But is this what people want from festival acts? I don’t think so. I would happily listen to Rachel, or the Staves in a seated or more intimate venue but tend to lose interest in big tents. Sorry.

No-one can accuse the Dangleberries of being shy, retiring, vulnerable… from the opening strains of AC/DCs “it’s a long way to the top if you wanna rock’n’roll” – the pipes, singing, guitars, thundering bass were all that the Dangleberries base their fantastically successful recording and festival careers on. It may not be to everyone’s taste but you cannot argue with their popularity. 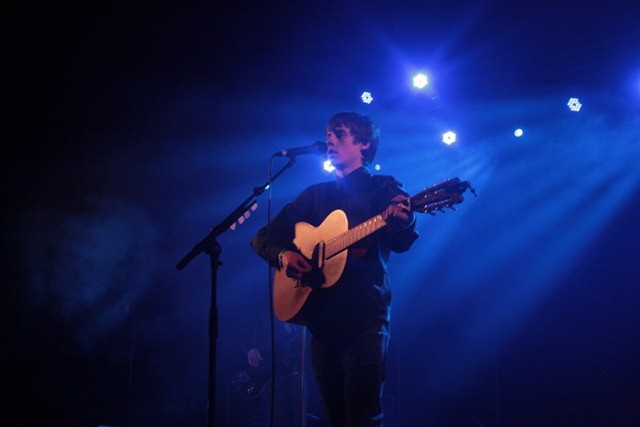 There was a buzz around the arrival of the next act to take to the stage with tall claims of him being the next Bob Dylan , Jake Bugg a cool confident 18 years old took the stage, his sound is very distinctive with shades of influences of the greats, however he remains truly unique, whether he rises to such iconic status only time will tell, he is certainly one to watch ! 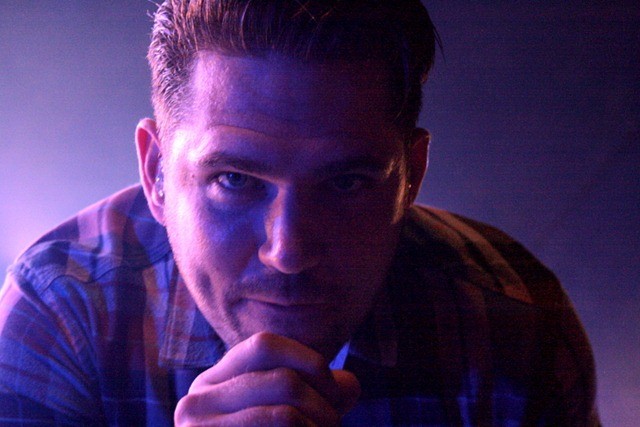 The final act of the festival and the tent was full to capacity and I must admit I was surprised at the reception given by the frenzied crowd for Scouting for Girls ! They stormed the stage giving the crowd what they wanted. Front man Greg worked the stage with his piano pounding anthems from the start involving the audience in every song. It was clear that the band were there to have fun and that they liked each other as each member was given place,  producing the slick sound of pop punk fusion. A fun and rousing end to Loopallu 2012.

Many thanks to Julia Morgan for her photographs.

You can see more of Loopallu 2012 photographs on our Facebook page.