The Hackney base quartet,Rudimental, come to the Ironworks, Inverness on the 15th of September. 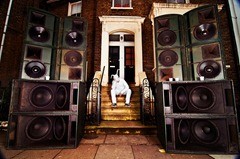 “We aren’t just electronic bedroom producers, and we’re not just guitarists and pianists who don’t know much about making a beat,” declare Rudimental, aka Piers Agget, Kesi Dryden Amir Amor and DJ Locksmith. They are seen as following in the footsteps of the likes of Basement Jaxx, Groove Armada and Chase & Status, with Contact Music asserting “without a doubt, one of the most promising new faces to emerge in electronic music for some time”. A sentiment echoed by the likes of Zane Lowe, Fearne Cotton and Mistajam.

10 million views of “Feel the Love”, which features the elusive John Newman, identifies the size of phenomenon that the group have created. Whilst fame may be forthcoming, fortune is not quite there yet.Band member Piers Agget explained to Chartscompany.com , when the afore mentioned single made number 1 “We may be Number 1 on the Official Chart, but at the moment I haven’t got much money. I tried to buy the download on Sunday, but it didn’t work, so I had to borrow money off Kesi’s(bandmate) mum!” There is a laid back feel  to the quartet who described themselves as “We’re like Dr Dre, James Brown and Dizzee Rascal in a cheeseburger” or “We are Sly and the Family Stone, Todd Edwards and Dr. Dre in a cheeseburger”, depending on which interview you read.

Casting your eye over the tour schedule you maybe surprised by the intensity, 25 gigs in 30 days. When it comes to their live performances, they aim “to not be just another run-of-the-mill dubstep act”, with Piers adding “we’ll hopefully even be playing some instruments too”. It is clear whilst they have come far they still have a fair bit to go to meet their ambitions “we’re still wanting to be on the main stage at Glastonbury or elsewhere in the next few years – maybe even a little sooner.”