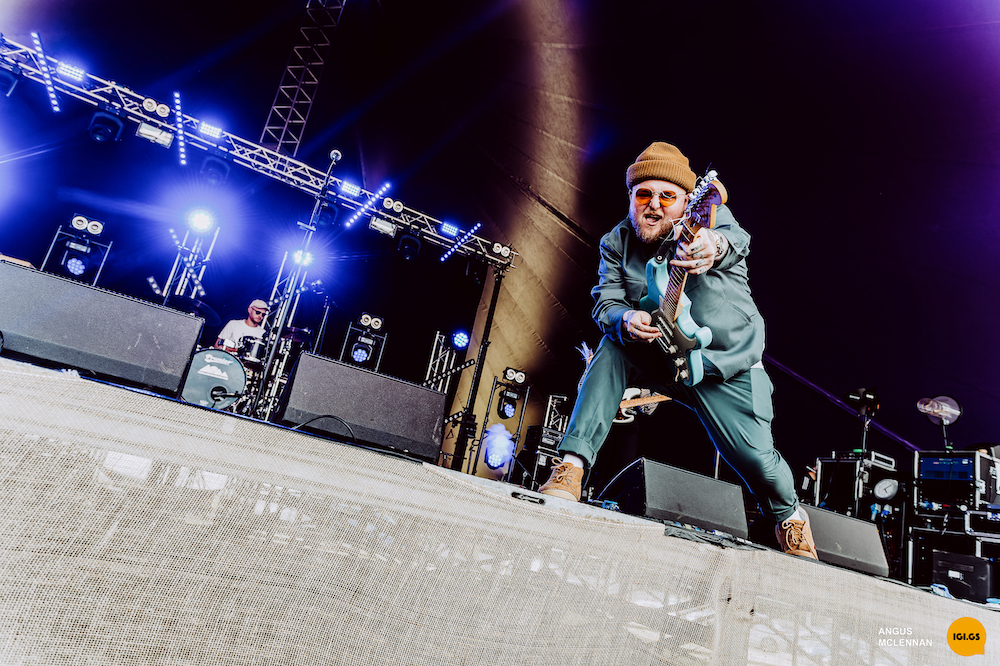 A review of Friday at Belladrum 2022 including Siff Little Fingers, Neon Waltz and The Lottery Winners and more

With campers on site the traffic into Belladrum was much lower than Thursday, and we landed on site in time to catch Katie Gregson-MacLeod opening the Hot House. The set had already started and had drawn a considerable crowd. This was the first time that I’ve seen Katie with a full band, as previously it has only been in smaller acoustic gigs. Katie has crossed over from solo singer to fronting a band with ease, especially the last song where she rocked it out to the end. Katie is very much on an upwards trajectory. (you can read our review of Katie from earlier in the month here)

Meanwhile in the adjacent tent indie rock band Primes were withstanding the heat of the seedlings. It’s indie rock but the jaunty guitars of ‘Talk Too Much’ give it a pop edge and with  ‘Here Right Now’ it’s pure power pop. I’d keep an eye on this band.

The heat of the Seedlings set me off on a track for the Burke and Hare stages. It’s tucked away in the far corner of the Walled Garden and is a collection of the weird and wonderful that make up Belladrum. It’s also where Windswept Brewing have their bar and as well as their own beers that have a number of guest ones too. I went for a Coastal Haze which is a fine example of a NEIPA, and comes highly recommended but I would advise against having too many as it comes in at 6.8%.

Making our way back up to the main section of the site we happened upon Team Extreme who were performing stunts on two half pipes with rollerblades, skateboards. scooters and bikes. This had drawn a large family crowd and you could see why. They were throwing everything into this and although it didn’t always come off they didn’t shirk a challenge. As they say, don’t try this at home kids!

If every Belladrum appearance is a checkpoint in Tamzene’s career then it is clearly still on an upwards course. She is finding her niche, and it’s soulful and controlled. She owns the stage, and the audience. Maybe that has something to do with sharing the bill with Adele at Hyde Park earlier this summer. And her voice, it would give Thursday night’s headliner a run for their money, and I’m not talking about Peat and Diesel!. Tamzene moves from piano to guitar with ease. She’s got this worked out.

Heading back down to the Hot House it was the turn of Lucia and the Best Boys.. Sometimes a band can flatter to deceive, style over substance and all that, but not Lucia and the Best Boys, they have it all. I can best describe the sound as euphoric rock pop, but that would be too simplistic. ‘Somewhere In Heaven’ for example, which they don’t often play live, offered raw emotion, whereas ‘When You Dress Up’ has a darker Taylor Swift feel. Overall it’s theatrical and Lucia knows how to connect with an audience.

Next on the Hot House Stage were The Lottery Winners. Having bought a few of their albums, which I greatly enjoy, I didn’t realise that they are not a serious band. Well, they are but… From the off when frontman Thom Rylance came on stage and underwhelmed promptly walked off asking to be welcomed like he was Freddie Mercury. And this continued throughout the set, at times I was wondering whether Johnny Vegas had infiltrated the band and it was the weekend’s best kept secret. As bonkers as it was, all the hits were played, ‘Meaning of Life’, a Frank Turner-less ‘Start Again’, and ‘21’. There was a wee dig at the ‘songs of praise’ interaction aimed at those in the pews at the back, but overall it was all good natured. Not what I expected, but thoroughly enjoyed, and that’s what a festival is all about.

Neon Waltz then brought their soaring anthems to the Hot House. It’s a mix of new and old from the John O’Groats band. It’s all held together by their enigmatic lead, Jordan Shearer, who often appears detached from proceedings but comes to life in songs such as ‘Dreamers’. They sit well as that link between the afternoon acts and the lead up to the headliners. Currently working on their second album, it will be worth a listen based on this afternoon’s showing.

A few steps away in the Seedlings is The Joshua Hotel. Josh has been fronting local band Lional for a number of years and recently released tracks under The Joshua Hotel in what appeared to be a side project, but on today’s showing it is clearly more than that. It’s understated electro pop with a nudge to many early 80s acts including formative years Human League and Simple Minds, but when the guitar kicks in it drifts in a Chris Isaak, ‘Wicked Game’ direction. It’s all brought into the 2020s with Josh’s touch. Impressive.

I remember seeing Goodbye Mr Mackenzie back in the late 80s, and although they may never have got the sustained chart success that their output deserved, they are always one of the first Scottish bands that people speak about when reminiscing of that era. A barely recognisable Martin Metcalfe from the 80s, but then aren’t we all, led like he had just stepped out of the earlier mentioned Burke and Hare. With the bulk of the original line-up in place there was more than a touch of nostalgia but equally they weren’t a band playing on former glories. It was good to see Big John Duncan in the line up and he was given the opportunity to lead on the Cramps cover ‘The Way I Walk’. With old fan favourites ‘The Rattler’ and ‘Goodbye Mr MacKenzie’ in the second half of the set they ended on ‘Blacker Than Black’ to rousing applause.

Dinner stop was round at the Redshank by the Trailer Trash stage and their wonderful seafood. This caused a little delay in getting back to the Hot House, and a further lengthy queue at the adjacent bar where Vistas were knocking out one festival anthem after another. It was a fine backdrop to a bar queue though.

When it came to the headliners it was a choice between boogieing with the Fratellis or some old school punk with Stiff Little Fingers. Tonight it was SLF and memories of jumping around to them at youth club discos. They did not disappoint. Straight in full throttle with ‘Suspect Device’ and ‘At The Edge’. Jake Burns was clearly enjoying being back on stage but took time out to mention mental health issues, both his own, and that men really don’t talk enough when it comes to such matters. This was roundly applauded as they delivered ‘My Dark Places’. It was good to see “Bits of Kids’ get an airing from ‘Now Then’ which he accepted was a divisive album, and also the epiphany to drop ‘Safe As House’ by a key so that he could sing it!

The set kept the sizable crowd jumping, bigger than what the old Hot House would have handled. Ending with ‘Gotta Getaway’ and ‘Alternative Ulster’ we drifted off into the night knowing that Belladrum had delivered once again.