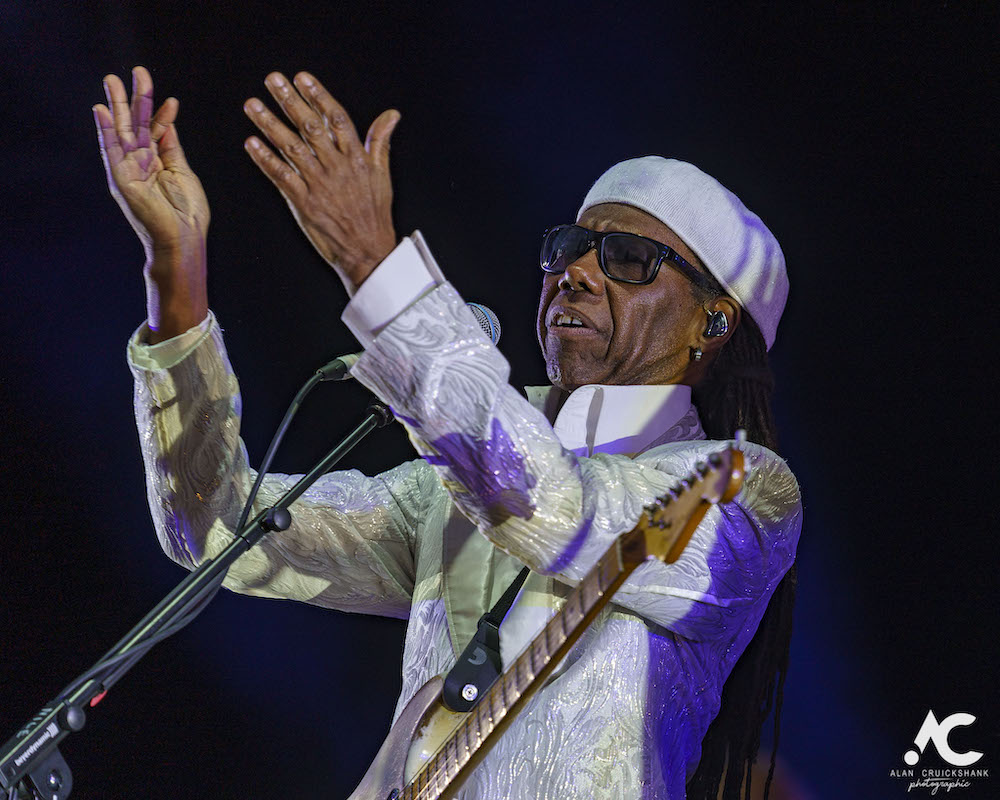 A review of Saturday at Belladrum 2022 including Kyle Falconer, Daytime TV, Chic and more

Luke La Volpe entered the Grassroots stage with his band adorning a three piece suite. As he did admit it wasn’t the smartest move on a day like Saturday with the sun beating down outside and the temperature in the tent increasing. What was a smart move was catching Luke’s set. There is a dark depth to Luke’s voice which matches the atmospheric ‘Dead Man’s Blues’. Overall he sits between George Ezra and Lewis Capaldi, deep and soulful and has a catalogue of songs to back it up. His tribute to his late grandfather ‘Live It’ was touching. He should, and deserves, a big future based on this performance.

The lunchtime trip to the parallel universe that is the Burke and Hare pub saw refreshment in the form of Dog Falls Brewery’s Colloidoscope, a hazy session pale ale. The beers here are superb, but they are a little out of the way. Maybe a more central location next year?

One of the pluses of the bar position is that you can take in the acts at the Free Range Stage. Predominantly an acoustic stage it hosts a number of local and up and coming acts. It appears a lot more open than previous years and you can afford yourself a little time to sit on the bank and listen while sipping on the aforementioned beer. Our visit there coincided with Danny Mortimer who was entertaining those with similar plans as us. It all seemed like a very family affair at the stage. Just what Belladrum should be about. Word on the street is that Danny is playing Madhatters on 19 August and maybe we will catch a bit more of him then.

Back in the Grassroots, Hamish Hawk was preparing to enter the stage. I have been a big fan of Hamish’s 2021 album, Heavy Elevator and was pleased to see him on the Bella bill this year, and he didn’t disappoint. This was a clever set which drew the crowd in.

Hamish is an animated character, but also very humble. The gentleness of the early set was slowly being ramped up for ‘Mauritian Badminton Doubles Champion, 1973’ and his animation upped a level, this then led into a surprise cover of Pixies ‘Debaser’ which saw Hamish deliver in a frenzy setting up set ender ‘Caterpillar’ perfectly. And with humble acceptance of the applause Hamish and his band left the stage.

Also known for his stage presence is Toby Michaels, and he was taking up a late afternoon slot at the Free Range Stage. Toby showed that playing acoustic should be no barrier to playing loud. Focused mainly on more recent material it was a hard rock set. Toby also lent an ear to those who are experiencing mental health issues, and talked of his own struggles. He did at the end of the set throw in an ‘oldie’ with a good old blast of ‘A Little Bit of What You Fancy (Does You Good)’. It was good to see Toby back on stage where he belongs.

Down at the Hot House Stage were Everyone You Know. I’ll be up front on this one, Everything You know weren’t on my itinerary for the day, not that it is easy to stick to one at a festival, but here I was at the Hot House and they were taking the stage. Although not a genre that would have me racing down to the front, I liked what I heard, they even threw in a cover of Sam Fender’s ‘Play God, for good measure. One for fans of Jamie T and The Streets, they had a bit of attitude, and I was impressed with ‘The Drive’, but what do I know?

What I do know is that the Hot House, and I’m not sure that name sticks the same way with it being an open air stage, has a completely new feel to it. Previously if you weren’t in the tent, you weren’t part of it. But that has changed. Much to the chagrin of many acts, who wanted people to come forward, there were people parked with their chairs and blankets for the day, a bit like those who do the same on the terracing at the Garden Stage. There was something else about the gentle slope down to the stage, and although it didn’t have the same backdrop, it did have the feel of what was the main stage at RockNess. And this going forward can only be a good thing.

If there was one person who was really up for the festival this year it was Kyle Falconer. Kyle has released a couple of albums post The View, although I may have spoken too soon as they are playing a series of sold out dates in December this year in Glasgow, and his set would focus on those albums, but of course you couldn’t keep him from his back catalogue. His opening tracks, ‘Stress Ball’, ‘Laura’ and ‘Avalanche’ bring the crowd forward before dropping ‘Same Jeans’ which gets the crowd into a frenzy. Having brought everyone forward he goes to the keys for ‘Tacky Tattoo’ before turning to the ukulele.

This is Kyle at his best. There is something quite frantic about it all, but he does have time to bring Niamh on who sings a cover of ‘You’re Still The One’, and we are treated to the briefest of the brief blast of ‘Best Friends’ from South Park. Kyle has a thing for South Park. He also has a thing for putting together a solid set, and mixing the new with the old, ‘Superstar Tradesman’ was thrown in for good measure, and giving a crowd what they want.

Festival audiences are a savvy bunch. They’d looked at the line up and the run of bands was such that an afternoon settled by the Hot House was going to be top notch. Daytime TV, known to many under their previous moniker ‘Hunter and The Bear’, were no exception. They played the Ironworks at the tail end of last year, and would have caught the eye of many here today. They also hinted at a return in the near future too… There was a focus on tracks from their album ‘nothing’s on but everyone’s watching’ which they released in February this year. Frontman Will Irvine knows how to get the best out of a crowd, and John Caddick is keen to be close to them. They are driven along by the engine room of the more self-effacing Chris Clark on bass and Gareth Thompson on drums. It’s pretty much raw energy as they rip through the set. New song ‘Domino’ appears to have harder edges than previous which may point in the direction of the band.

And then before you knew it, it was last night headliners. There was tough competition for attention with Ash at the Hot House and Edwyn Collins at Grassroots but, along with many, I hot footed it to the Garden Stage for Chic and Nile Rodgers. Like many I was starting to wane, my phone said it’s power was down to 20% and did I want to go to low power mode? No, not for Nile Rodgers.

This was as slick as it comes. It was press play on the mix tape and Chic came to life. As much a stage show as a set by a band, it was orchestrated by Nile who took us through the catalogue opening with ‘Dance, Dance, Dance’ and ‘I Want Your Love’ synonymous with the band and then into his work with Diana Ross, mashing up ‘I’m Coming Out’ and ‘Upside Down’ before slipping into some Sister Sledge. He may get it right in the studio but Madonna spurned his advice and released ‘Like A Virgin’ before ‘Material Girl’. It did her no harm, and Nile just smiles as he tells the story. Seamlessly we move into Bowie’s ‘Modern Love’. I say Bowie but you know what I mean. ‘Spacer’ originally by Sheila B.Devotion really caught me out as I had never associated this with Nile. Then ‘Notorious’, which I’m sure I heard that somewhere else this summer…

At this point I should make mention of Nile’s band. They were more than keyboard players, drummers or backing singers. They were integral in pulling the whole show together as each had their part to play and vocals which came to the fore more than once. With crowd ‘Lost In Music’, the ante was upped with ‘Get Lucky’ kicking then to ‘Let’s Dance’ and it was all taken to a crescendo with ‘Le Freak’ and ‘Good Times’. Tonight Belladrum was Studio 54.

Three days. Three days of music. Three days which we have had to wait three years for. If ever a marker needed to be put down it was this.