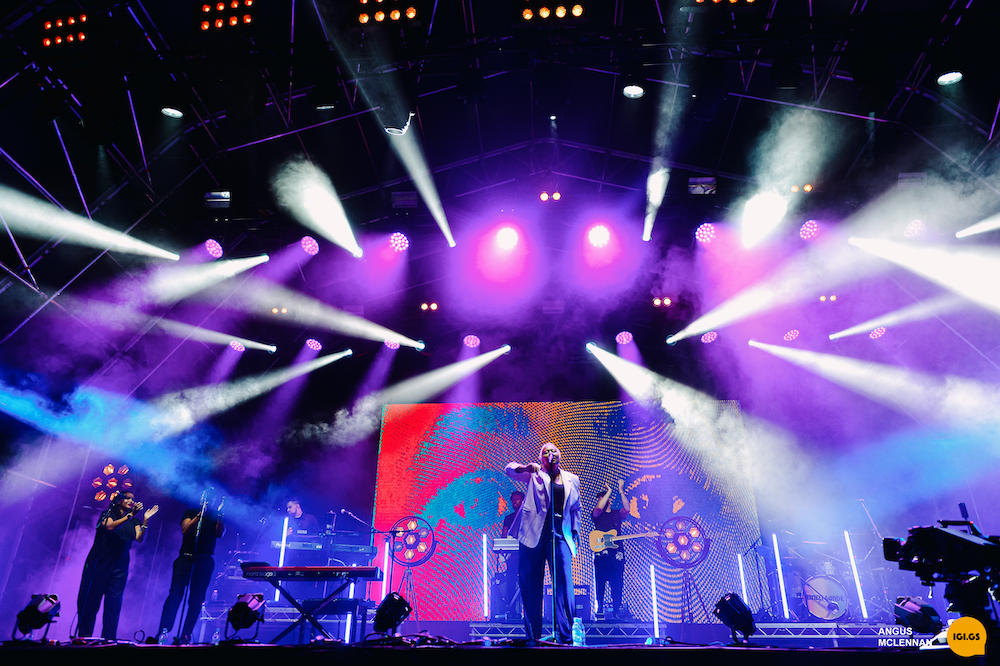 A review of the first night at  Belladrum 2022 including Emeli Sande, The Academic, Chancers and more

Finally, after three years, it was here. Belladrum returned as if it had never been away. A quick scout of the site revealed a few minor changes; the Black Isle Bar had moved a few metres away from its usual spot and its hay bales had been replaced with old cable reels, the food choices had expanded to include a greater vegan and vegetarian choice, the seated pyramid at the Bella Bar had gone but overall these were tweaks to an already winning formula.

However, the real game changer was at the Hothouse. This has always been the second stage at Belladrum but as it was within a tent it restricted numbers but this year it is an open air stage with a capacity not far off that of the main stage. This was going to change the dynamic as the day wore on.

The weather forecast was set for fair for the festival and should peak on Friday but although rain wasn’t forecast our first stop at the Ice House was under broody skies as we caught Isaac Sutherland. For those not acquainted with the stage, it is perched above the garden stage, more or less between it and the hothouse. It has a fairly relaxed feel and acts tend to have slightly longer sets. Isaac took advantage of this and threw in a number of instrumentals into his solo, and virtuoso, blues set. A little bird did tell me that this was only a taster of what Pale Moon would be bringing to the stage at 5 on Friday.

Next stop was the Bella Bar stage where there were a run of local acts playing under the Igigs banner. First of those was Sarah Williamson whose frenetic solo set was going down a storm. Not always for the faint hearted, forthright Sarah would explain briefly what each song was about whether that be jealousy, being a loser and er oral sex. Romance isn’t dead when Sarah is about, it’s well and truly six feet under.

I’ve missed The Dihydro who were up next. They were coming onto a strong game as the pandemic struck and their thunderous performances were sorely missed. Well they are back and gave it heavy riffs and snarls. It was a no fucks given set with a last song thrown in for good measure that drummer, Jamie, was not expecting. Any cobwebs at Belladrum were well and truly blown away.

One band who have come out of lockdowns firing on all cylinders are Chancers. With each performance the band is honing its set, and today was no exception. Jake Bolt shares centre stage with Laurie. It is not just the stage that is shared but the chemistry between them. Laurie’s influence reels in some, but not all, of Jake’s exuberance. It’s grungy rock ‘n’ roll, but there is a softer side to it too. Cover, “I Saw Her Standing There” at the end nailed this set. A bigger stage next year perhaps?

The Seedlings stage is now in the firing line of the Hot House and sets there need to be played in between those on their neighbour or there is virtually no chance of being heard. This was the case when we popped in for the Delmar Chorus. Torridon had just ended, playing to a huge crowd, and some of those ventured in from either curiosity and they knew that Willie Campbell was part of the Delmar Chorus. Willie is a well kent face and is known for his solo work, Open Day Rotation, Tumbling Souls and Astrid. Although the set was relatively short there is a lot of promise in this collaboration with Kapil Seshasayee. Focussed on the wellbeing economy this does not have any limiting on their ability to produce a small collection of fine tunes.

First visit to the new look Hot House Stage was for Irish band, The Academic. It can be a little deceiving with it being open air as there was a group concentrated down by the barrier but the crowd thinned out beyond this. This was possible without the confines of a tent’s perimeter so overall it was a healthy turnout. The Academic didn’t disappoint with a sound that straddled the energy of a Circa Waves live set and the melodies of Blossoms but with a bit more bite. Their revved up indie rock connected well with the younger elements of the audience, especially when a song focuses on fake ID! There is also a swagger to lead singer Craig Fitzgerald of an on form Pete Doherty. We really should be hearing more of this band but at least they will now be on the radar of those there today.

With Sam Ryder cancelling due to illness the main stage headliners had a very different dynamic. The north east of Scotland, with Alford’s Emeli Sande at the Garden Stage was now going head to head with those marauders from the Western Isles, Peat And Diesel, who crossed sea and land to get here as late replacements at the Hot house.

Two very diverse acts, and I plonked for the voice of Emeli Sande. The Garden Stage was busy, but not as rammed as I have seen it as Emeli took to the stage and belted out opener ‘Heaven’. It was clear from the start that Emeli had assembled a band of tight musicians and backing singers of which Brian would have a front of stage role during the set. Emeli said that she would take us through all the albums and did not disappoint.

She settled at the piano for ‘Clown’ but was generally front and centre for her upbeat and spirited performance. Her range was evident in songs such as ‘Hurts’ and ‘My Kind of Love’. There was an added dimension to her performance and that was her intros to each song which kept the flow. They were somewhat poetic and had a beat and resonance which matched the smile on Emeli’s face. There was a real crowd highlight when she brought backing singer Brian forward to duet on her collaboration with Labrinth ‘Beneath Your Beautiful’. As the night drew to a close the pace picked up with the likes of ‘Next To Me’ and ‘Brighter Days’ ended the set before Emeli returned to the stage for ‘Read All About It, Pt III’.

This was a polished performance with one of the finest voices of this age. Emeli’s sparkle was evident throughout the set and was a fitting way to bring down the curtain on the first night back at the Garden Stage in three years.