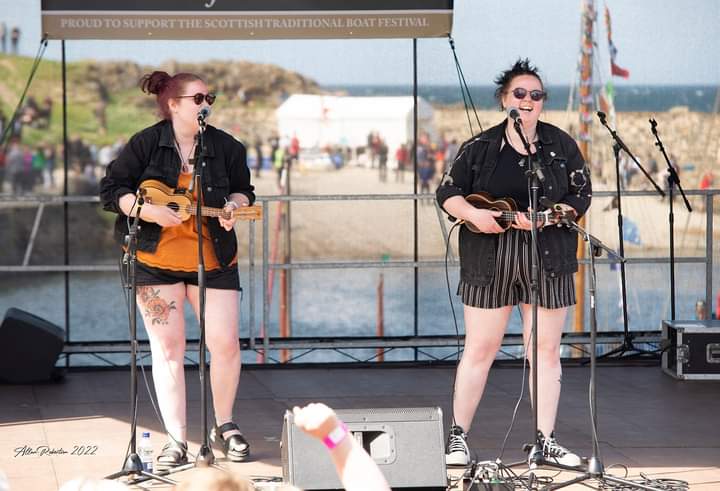 We catch up with Fair Trickit ahead of their performance at Belladrum 2022.

You could say a myth is that we actually know what we are doing. We just wing it every time and have a good time, when it comes together it’s a bonus.

Chunk from the Goonies is our spirit animal, Kate Bush is our hero so we would have to say performing wuthering heights with Chunk.

We have been attending Bella since we were 11 so picking one would be a struggle however a few highlights would be Kassidy, Tom Jones and First Aid Kit

To prepare for Bella 22 we are currently trying to co-ordinate outfits and time off work, we are working on a set list and covers too. After we have played, we are hoping to catch Colonel Mustard and the Dijon 5 with a pint (or 5)

Sing Ariba, Tinnie Time and ding ding round 2 are our definitely our favourites to play. Our cover would have to be Whenever Wherever by Shakira hands down.

Nessie no questions asked. Regardless of opponent, the Scottish one will always win.

The idea of 20 Nessies would be a sight.

Unicorn to play triangle with its horn, we feel a kraken would make an excellent and efficient drummer and maybe a couple of dragons to fill out the brass section, we’d call ourselves “A Rare Sight”

You can see Fair Trickit at Belladrum 2022, performing at the Friday and Saturday at 15.00 on the Burke and Hare stage.. All things Belladrum can be found on our Belladrum Festival Page.