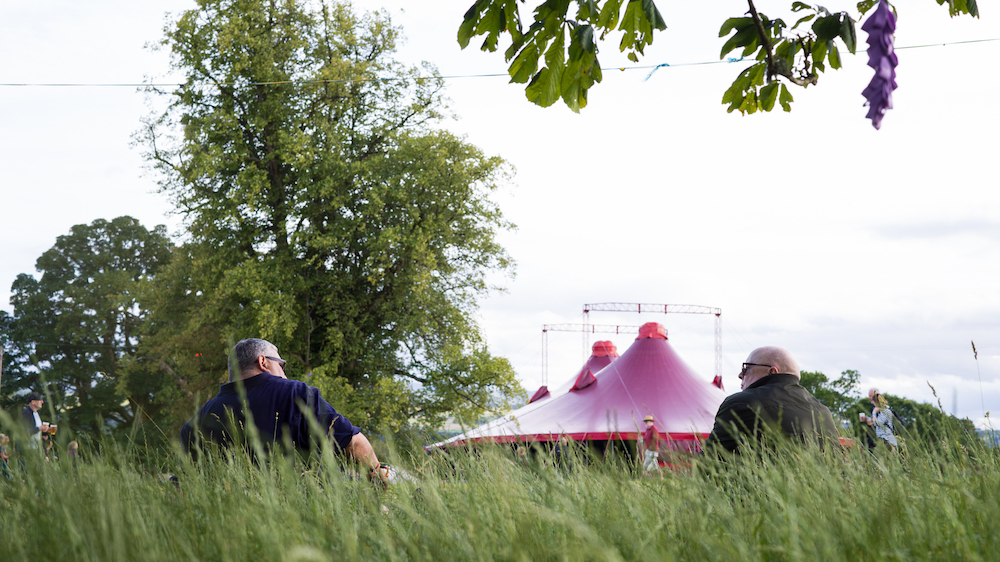 Take nothing for granted . . . We take a look at the Stirlingshire family (and dog) friendly festival, Doune the Rabbit Hole 2022.

I am cautious of talking about Covid as if it has gone, clearly given the current rates of infection it is still very much with us. Something though, has shifted; people don’t seem to be as seriously ill with the current variant(s). That shift is however a fragile thing and it seems to me from the conversations I have been having with people at gigs that there is a very keen awareness that next week, everything could change again, with a return to people being seriously ill and the country back into lockdown.

A couple of folk asked me if I’d been to the recent Kelburn Garden Party they said that that there seemed to be a lot of ‘love in the air’.  People were generally kinder, friendlier and more tolerant to one another, there was a genuine gratitude to be back at a festival, something they had truly thought might never happen again. I had a blether with Vic Galloway (he was hosting the main stage) who echoed all of that and added that never again would he take it for granted that live music and festivals would be regular calendar events: he had a greater appreciation than previously of the importance of live music and folk coming together for that common and shared experience.

I had decided to retire from concert photography because of Covid, and yet here I was at my second big event in the space of six weeks having been unable to resist going to see Lola In Slacks at The Barrowlands recently. I had been tempted so many times to make this particular trip but work-life and covering my ‘local’ festival which is timetabled just after Doune The Rabbit Hole meant it was difficult for me to get here. As with the Barrowlands there were a couple of acts in what was (for me) a very strong line-up that I couldn’t resist. For sure Belle & Sebastian but the opportunity to see the original Godmother of Punk, Patti Smith, was irresistible.

Festivals have a pretty familiar template: workshops, traders, food, wandering theatre, heritage acts, novelty acts, up-and-coming artists, breakthrough acts and of course established artists (some for longer than others). Doune the Rabbit Hole is incredibly child friendly and, new to me, dog friendly. It really was great to see so many dogs about the place, it made me smile a lot. It was also lovely to meet up with folk I know from the ‘festival scene’ and to have a wee catch-up with the Greenock Contingent, as Stuart Murdoch would say, ‘these people know their music’.

As we all know, people make the festival and every festival has it’s own personality. I have no idea how Doune The Rabbit Hole has done it but by some distance it is the most relaxed, friendliest, laid back event I’ve ever been to: I loved it. Of course the weather was great too and that always helps, but DTRH has a pretty special and unique personality.

What took me by surprise were my feelings when catching up with some acts I hadn’t seen for too long, it was again like catching up with an old friend. The Elephant Sessions were magnificent and Rachel Sermanni brought an actual tear to my eye. Stanley Odd – I’d no idea I would remember as many lyrics as I did and frankly Dave Hook is a genius. Mickey 9s and Sleaford Mods delivered blistering performances, Fauves and The Vegan Leather reminded everyone of precisely what we had all missed so much.

You won’t catch me saying anything negative about the likes of The Bluebells (‘less prolific than The Blue Nile’) or Teenage Fanclub who’s new album is a must buy going by the songs featured from it, and, what an absolute delight to see Camera Obscura take to the stage again after way too long a break – with the promise of a new album indeed. In fact there was only one act that had me scrambling for the off-button, but, in the spirit of DTRH, I’ll keep that to myself. (There are no photos of them, I was listening from afar.) Breakthrough acts for me were The Uninvited and She Drew The Gun, the latter being a feisty punk inspired set littered with socially and politically astute protest lyrics – go see them. I could go on but heck, the programme is still available to view on line so take a peek.

Thanks are due to Cardross Estate, the organisers and volunteers, the crew and security and to Michael Pellogrotti for arranging the press pass. Finally, it was a pleasure to be back in the pit with so many fine photographers.

Want to see more of Doune the Rabbit hole?

Check out the pictures of Doune the Rabbit hole 2022.

Please consider giving a little to the upkeep of the site via Buy Me A Coffee, it’s a big gesture that helps us to keep running this free to access website.