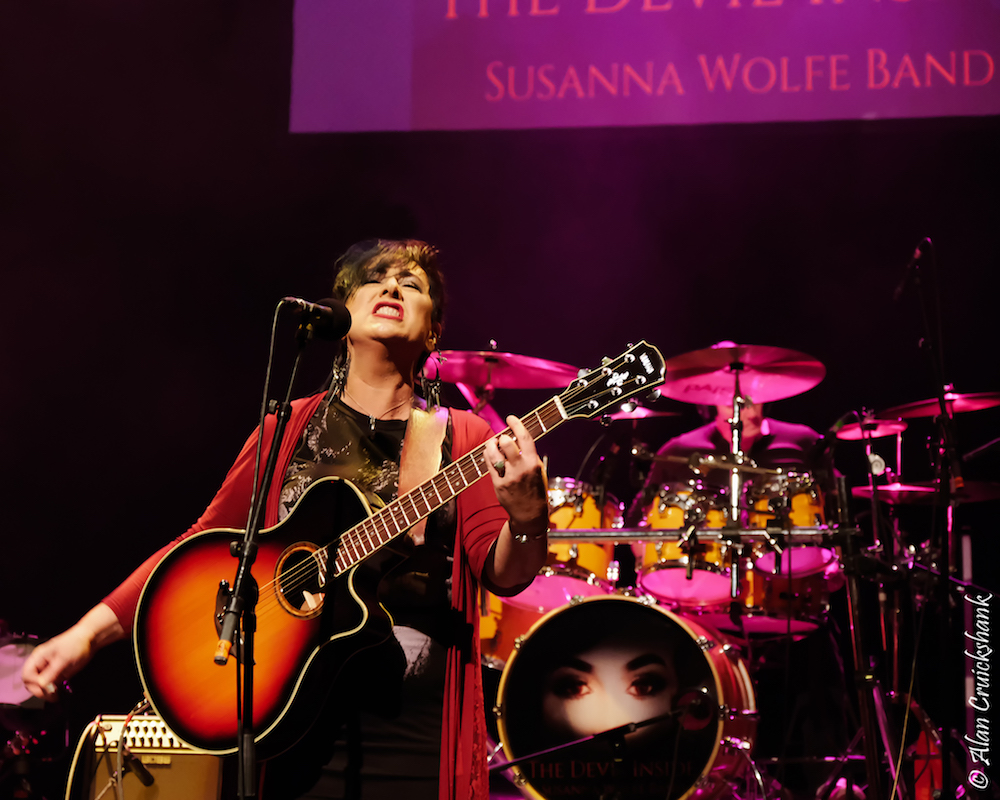 We catch up with Susanna Wolfe ahead of her performance at Belladrum 2022.

Lock down was an interesting time for me as a musician. It made me re-evaluate what it was I was trying to achieve. I was actually very busy doing a lot of remote recording for Artists as far away as Australia, Germany and a few closer to home.

I kept busy doing virtual gigs and I finally got round to start recording my new album produced by Martin Stephenson. However, playing live in front of people again was like coming home to me. It’s the connection I feel with an audience, it brings me to life.

Given the myths and legends theme of Belladrum 2022, can you tell us a myth or legend of Susanna Wolfe?

Apparently, some people find me scary, and I have no idea why?
As for myths, well, you know what they say, no smoke without fire!

OOOH SO MANY! Probably The Pretenders although I do love Reef

This year I’ll be playing songs from My new Album (plug, plug) Mantras for Modern Times, release date is 2 nd September so the playlist will be easy. Rehearsals have started already as I haven’t decided which songs yet.

After my set, I’ll be catching up with all the folk I haven’t seen for ages and checking out a few acts such as The Vandal and Mason Hill.

Well, the first three songs would have to be mine so “Wild Dogs” is in there. As for the cover, it would either be “Zombie” or The Stones “Wild Horses”, done Wolfie Style of course!

Keith Richards, the craic would be excellent!

She is in my mind

A unicorn the size of Nessie! Easier to dodge and I would tame it by singing sweet
lullabies LOL

Dragon on lead guitar for some hot riffs
Werewolf (me) on vocals cos I can Howl baby!
Troll on drums cos they play rock music (Terry Pratchett ref)
Thor on bass cos he would bring the thunder
Would be called M.C.I ( Mythical Creatures Incorporated).

You can see Susanna Wolfe at Belladrum 2022, performing at the Moose Hollow Friday 29 th July @ 16.40pm. All things Belladrum can be found on our Belladrum Festival Page.

Susanna’s latest Album, “Mantras for Modern Times” will be released on the 2nd September 2022 via Bandcamp produced by Martin Stephenson. It showcases diversity of musical genres that Susanna has embraced over the years. and featuring a wealth of relatable songs.

You can all catch her at;