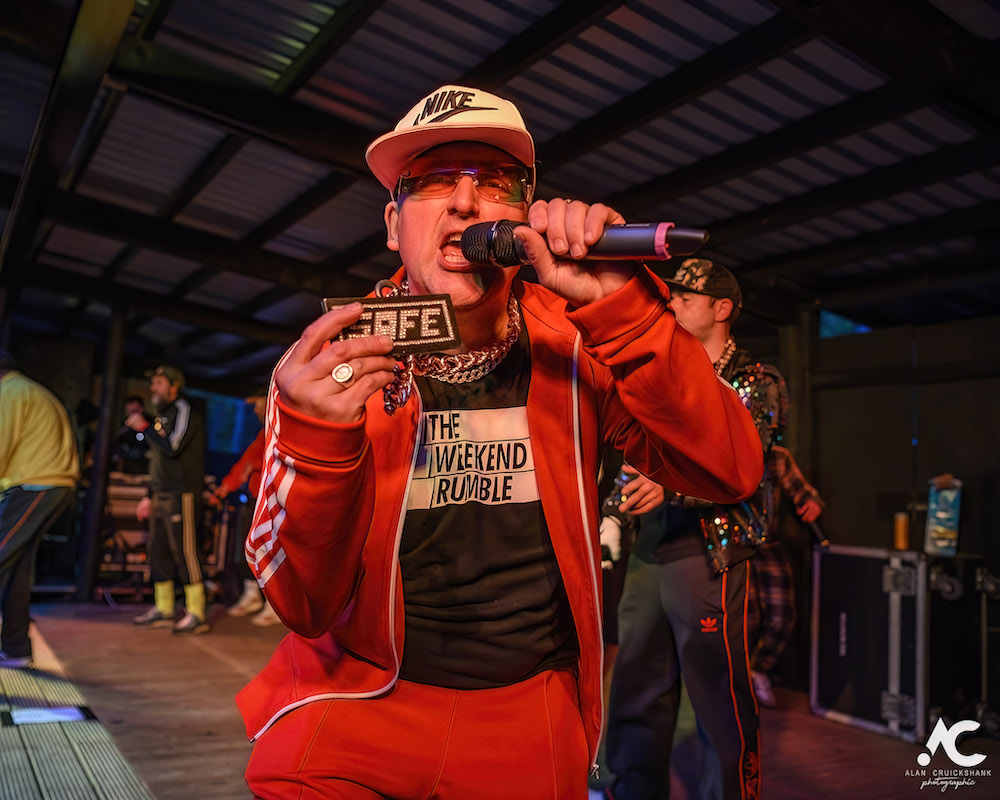 A review of Woodzstock 2022 including the triple headliners of Sandi Thom, The Complete Stone Roses and Goldie Lookin’ Chain.

We ventured to Woodzstock for the first time last year and a combination of post COVID relief and a well organised festival made for a great and reassuring step back to normality.

Woodzstock 2022 boasted not one headliner but three, so with the sun in the sky we journeyed back to the forest with more than a fair share of anticipation.

First on the mainstage were local scene stalwarts; The Whiskys (read our pre gig interview). Kris’s vocals are as powerful as ever with a fine mixture of soul and rock and in all it’s a storming set and great to hear the back catalogue reinvigorated Chris’s reliable bass are added to by an extra swagger from the fiddle playing of Bruce Macgregor and the dual guitars of Fraser and Pel.

A quick wander across to the second stage saw a collection of young acts perform on the Liam Colgan Haybarn Stage (you can read more about the sponsor here). We were fortunate enough to catch sixteen year old Rhoehaisse Clark. She played a short set of her own compositions including ‘Time to Cry’, they are really impressive tunes and whilst the confidence will come, the talent shines through. It is amazing to see such talent at the early stage, we are looking forward to seeing more of her in future.

“Festivals, Woohoo” Ashley enthuses mid-set, echoing the enthusiasm from acts and audiences alike. Whilst sun dancing is encouraged, the sun does not reciprocate. Regardless, Ashley and the Cosmonauts provide a perfect festival soundtrack blending well appreciated covers with the band’s original material such as “Tainted Eyes”. Such a bunch of established musicians, making it look easy.

The Black Isle Peas were formed over Covid and describe their music as music about “making people smile and be happy”, and their selection of covers create an opportunity for the audience to have a singalong. Ebo’s attempt to replicate ‘I Gotta Feeling’ stop before the high parts, well advised as they focus on their strengths.

The rain is starting to intrude, but regardless we were seeking cover to catch Dr Wook’s (aka Kris from The Whiskys) acoustic set at the Liam Colgan Haybarn Stage. It is a very different set to earlier with an intimate sound and a bundle of unexpected covers including “Time After Time” and “I Wanna Dance With Somebody”, that were definitely ‘Wookified’. Even a short lived stage invasion was not able to distract both Wook and the audience from an enchanting set.

The energy and sound was pumped up for Forgetting The Future’s return to the main stage. The band played last year but it felt like a far more assured set, the sound is very much akin to the Arctic Monkeys’ first album although at times the likes of My Chemical Romance and Placebo can be heard. Unsurprisingly the rain does not deter the moshing.

As Sandi Thom sorts the stage for her performance she is surrounded  by eager autograph and selfie hunters and her behaviour is quite humbling and charming for the chart topping singer songwriter. She opens her set displaying her skills on the mouth organ leading to a soulful and bluesy set. There is a level of impatience displayed by some audience members for her to play ‘Punkrocker’, which she acknowledges. It is played as the second last song of her set and whilst it is given an extended acoustic twist, the crowd lap it up. It is her first gig on Scottish soil for 4 years although and she promises to return to the festival next year with a full band.

If Mani gives credit to the Complete Stone Roses, then who are we to argue. Starting with Waterfall, the set is well appreciated by the biggest crowd of dancers of the night, albeit with fewer bucket hats than I would have expected.

And then to Goldie Lookin Chain…

The stage is completely cleared and when the set does start we are warned to expect lots of swearing in time to music, there was no disputing that. It’s a fun but very definitely adult set as the ensemble of seven middle aged rappers pose and posture at an impressive pace. Once you take the filter off, you can’t help but laugh and get into it.

If you can get the audience to chant “My mother’s got a penis” with a smile on their faces as they lurch to the exits, what else is there really to achieve in life?. You knows it.

This is a great wee festival acting as an oasis in the desert of gloom that it feels the world throws at us just now.