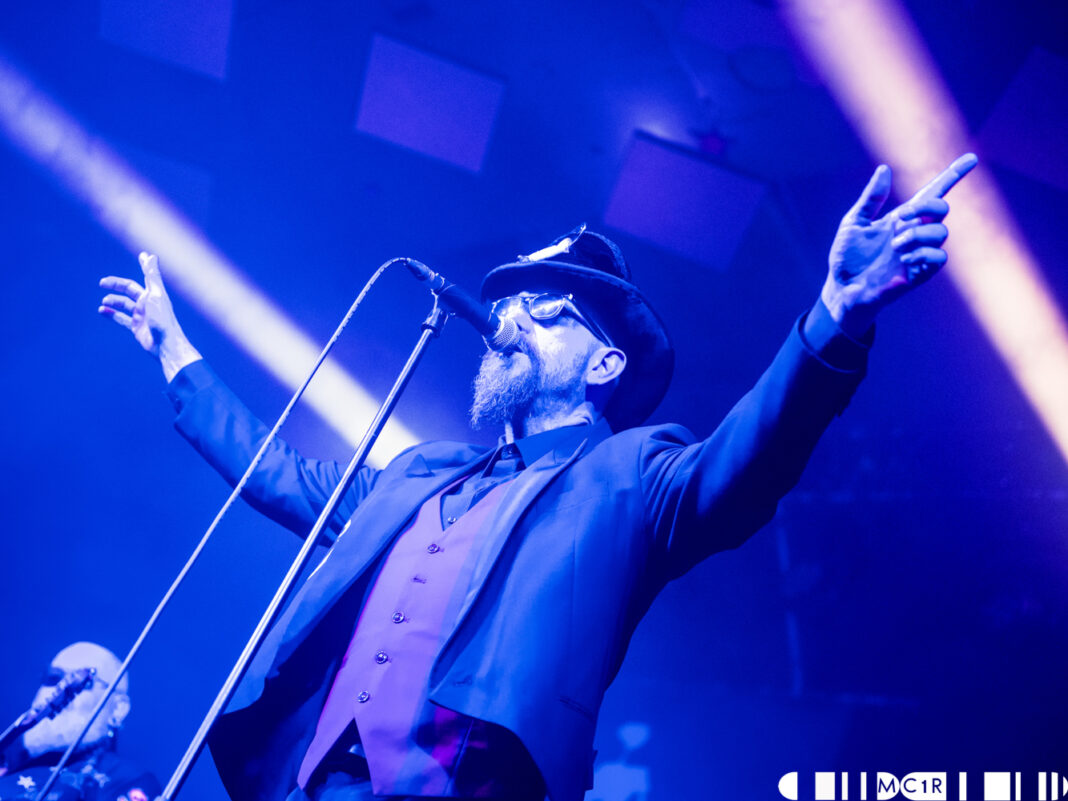 Goodbye Mr MacKenzie, with support from Callum Beattie and Lola in Slacks, at Barrowlands, Glasgow.

Never say never. I have retired from concert photography, couldn’t really see myself going back after the various lockdowns and thought I should try and preserve what’s left of the hearing in my left ear. There was a lot of talk about ‘that’ particular elephant in the room, it seems most folk knew someone who would have been there but didn’t want to risk contracting covid. That might be an attitude more prevealent with this evenings particular demographic: I’m used to being the oldest guy in the room at a lot of gigs but not when it features legends from my youth.

First on stage and the reason I made the trip – Lola In Slacks. I had wanted to catch them for a while and thought that chance had gone, so, just couldn’t resist making the trip south. And they were wonderful. Opening with Luna Moth we were treated to an immersive, sophisticated, sublime, sensual set of songs. All too soon it felt I was listening to an inspired performance of Strawberry Locks, truly bitter sweet, as it brought the set to a close. In a set of highlights Trocchi’s Canal managed to stand out that wee bit more for me. Vinyl only releases at the moment, so I might need to invest in a turntable, but, this is a band you really need to go see: an unforgettable debut at The Barrowlands, it surely won’t be their last.

Callum Easter, a white suit, a percussionist riding shotgun and a bundle of tech followed soon. I always admire anyone who can hold a stage that size on their own, but then there was also a very full, at times even massive, soundscape. Hailing from Edinburgh, Callum is an immensely talented singer songwriter with a diverse constantly shifting and evolving blend of soul, punk and rock n roll. He got a well deserved ovation and a lot of new fans tonight. Well worth checking out his recent album System – quite a few of the tracks now available on YouTube and that should prompt a purchase. Otherwise, keep an eye open for a gig near you.

A brace of fabulous opening acts then prior to the main event, Goodbye Mr Mackenzie (something I’ve had shouted at me way too often). We had a soupcon of theatre, great sound (again) and a back catalogue of classics that have more than simply just stood the test of time, this wasn’t simply some nostalgiafest. I was fan back in the day, but needless to say there were a couple of tunes I’d forgotten in amongst a barrowload of old friends including: His Masters Voice, Open Your Arms, Love Child, Blacker Than Black . . . great stuff. Saving the best to last we had a community singalong to The Rattler and finally-finally, of course, Goodbye Mr MacKenzie itself. Yes, I bought a t-shirt.

I enjoyed this far more than I thought I would. It was great to be back in the press pit with a good natured bunch of photographers talking about challenging lighting. A nice blether with Brian Irvin before he went on, and, with Tipi Hedron on-stage with Goodbye Mr MacKenzie and Lesley McLaren (Greenock’s finest) drumming with Lola In Slacks we had half of The Hedrons on show – fingers crossed they make a return to the live scene.

Thanks are due to Moira McKenzie at Regular Music for organising the press pass, to the staff at The Barrowlands who were brilliant and to Mr and Mrs Anderson of Largs for putting me up for the night.