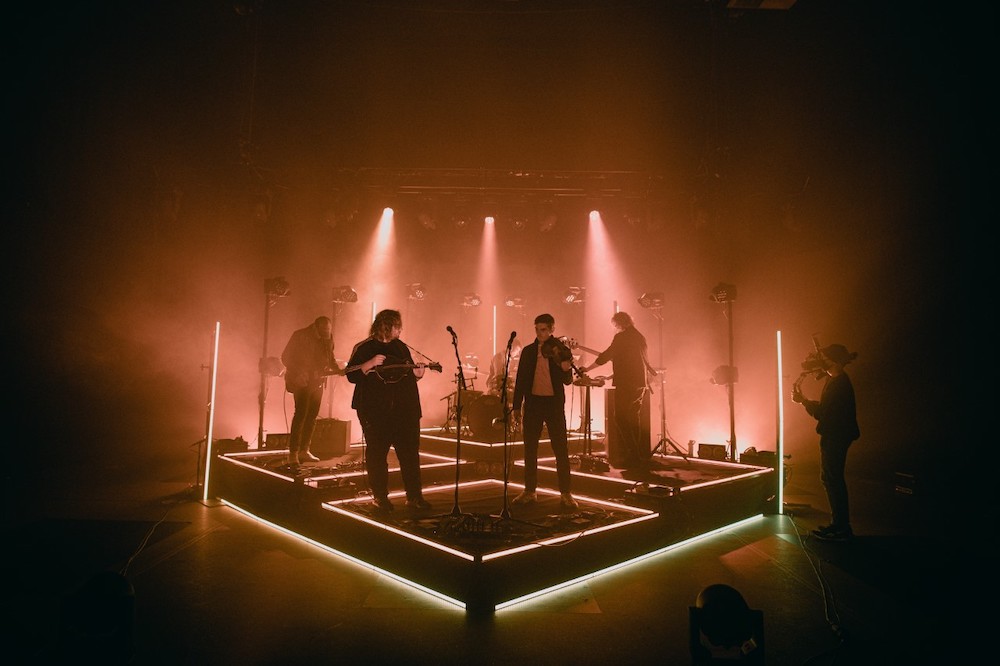 Ahead of their gig at The Gathering in May 2022, Euan of The Elephant Sessions answers a few questions for IGigs.

With their debut album The Elusive Highland Beauty being released in 2014, The Elephant Sessions have continued to build on it’s momentum; wether that’s playing Glastonbury, world tours or winning an array of awards. It’s no surprise that they were invited back to The Gathering and we were grateful that they took the time to answer a few questions.

We don’t want to dwell too much on the C-word, but has there been anything positive that can be taken from the past couple of years for you music?

Yeah it hit us pretty hard at the start, in a 48 hr period we lost a whole heap of international tours.. We all know how long it lasted but we are fortunate to be able to bounce back now as we come out of it all. We were able to meet up last year and so we knuckled down and got working on a new album. It has just gone to master and will be about later this year! There may be a sneak peak of some tracks at The Gathering!

Scottish Traditional music has hit a bit of a renaissance over the last few years, why do you think that is? And what impact has that had on your music?

There’s a hugely strong young scene in Traditional Music now, we are seeing it everywhere we go. Loads of up and coming bands smashing it around the festival circuit and iconic venues around the country. I think a lot of it comes down to there being so many events and opportunities for these young people to play in front of crowds, and a whole range of inspiring tutors all over the place within schools, colleges, universities, and youth organisations like the Fèis movement.

From a young age we were inspired by so many amazing Trad bands such as Croft No 5, Shooglenifty and Treacherous Orchestra. The power and energy these bands had to put on incredible live shows had a huge impact on us!

It looks like the new album is nearly ready to go, what can you tell us about the follow up to ‘What Makes You’?

Yes! It’s felt like a long time coming and we can’t wait to release it! It’s on it’s way to mastering right now and it will be out later this year! We can’t say too much about it now, but we have featured an incredible string section and we’ve been lucky enough to work with a dream team of a producer and engineer! You may hear some tracks from it at The Gathering!

It appears that you had a ball on your Australian tour in March, especially in the context of the last couple of years, how was it for you guys?

It felt quite surreal to be back out in Australia! We thought everyone out there may have forgotten about us after so long but we were pleasantly surprised! People came out in force to support us in Melbourne, Sydney, Adelaide and beyond. The atmosphere is wild and the crowd love to bounce all over the place so it’s always a great party!

How important are events like The Gathering for the scene, and what acts are you looking forward to catching at the festival?

Events like The Gathering are crucial for the future of Traditional music, especially coming out of such a dark time for the music scene and greater events industry. Reminding everyone how much fun live music is! These festivals are so much fun to play, a great opportunity to meet new fans, and overall an amazing celebration of Scottish music on a big stage.

We can’t wait to see our pals Project Smok and Heisk, they are both guaranteed to put on a banging show, absolute powerhouses!

If you had to abandon your current genre and recreate yourselves in a totally different guise, what type of music would it be and why?

We would lose the fiddle and mandolin, grab a set of decks and deliver a DJ set… Who doesn’t like a smooth mix on the 1s and 2s?

We have a UK Tour kicking off and running throughout may, then it’s straight into the full festival season. We’re all over the UK and heading to Europe. For any tickets and dates head to the Elephant Sessions website.

Tickets for The Gathering are available HERE

Like what you see? Please consider giving a little to the upkeep of the site via BUY ME A COFFEE, it’s a small gesture that helps us to keep running this free to access website.