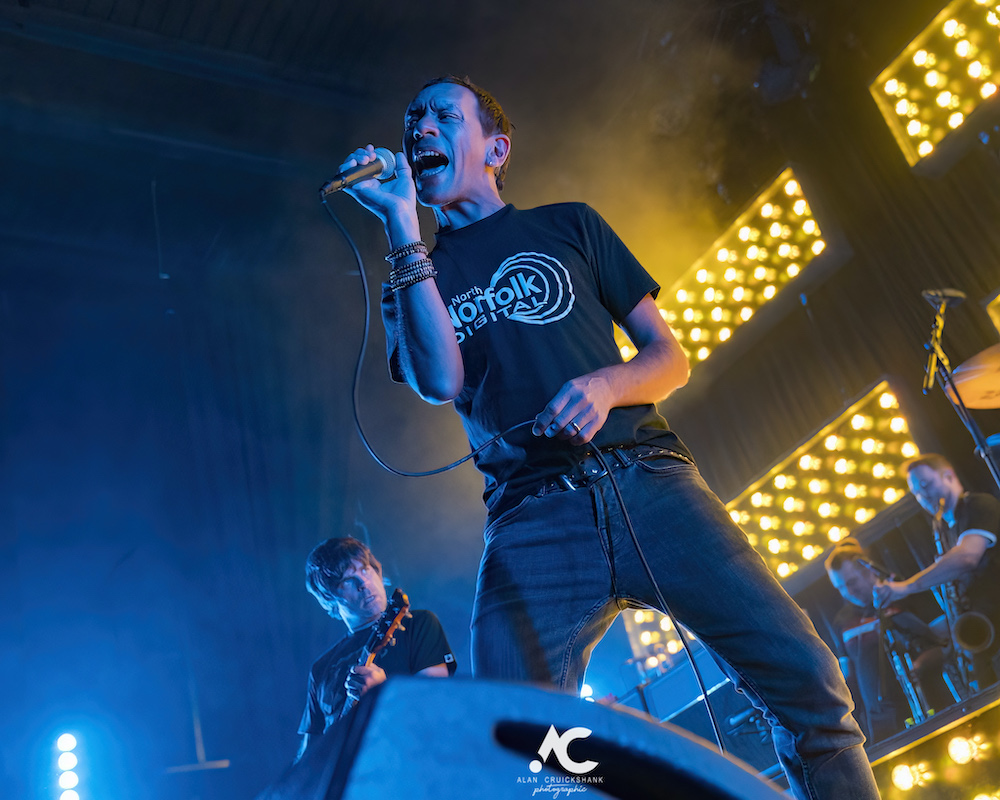 Shed Seven, with support from Shambolics, at Ironworks, Inverness.

According to manager Alan McGee, Shambolics are ‘one of the great Scottish bands’. That’s high praise and a high bar to set from a man who knows a thing or two about what great bands should sound like. The thing is, he’s not wrong, the band are pretty damned good and absolutely brimming with character and confidence. Sonically, they bounce around between Manchester, Liverpool and the West Coast of America. Combining Beach Boys harmonies with Britpop-era guitar hooks to create ‘dreamy Rock n Roll’. (Their words – accurate too). They even have their own hipster photographer, who can be found popping up in random spots like a meerkat with a flashgun. There’s as much jangly guitar as you could possibly wish for, gelling together to make an altogether agreeable racket. Hailing from Fife, the band make a good impression on the Ironworks punters and will surely be back before long.

‘Did you spend £20 just to come here to tell me to fuck off?’ asks vocalist Rick Witter. A huge grin is plastered across his face as his request from audience member Wendy for a bit of local gossip is responded to a wee bit impolitely. It’s all in jest though and the smile is never far away during frequent exchanges with the audience. It’s also his birthday, he’s 49 you know? He plans to get pissed after the gig, until then, he’s utterly present and in superb form throughout the set. This gig and the one previously at Fat Sam’s in Dundee are billed as intimate warm up gigs ahead of their UK Greatest Hits tour later this month. Many of the those dates are already sold out, so it’s nice to have the chance to see the band in a more intimate setting.

The band kick off in ebullient fashion with ‘Room in my House and continue on familiar territory with ‘Casino Girl’ and ‘High Hopes’. There’s a muted response to his intro to ‘Victoria’ from the last album ‘Instant Pleasures’. He pauses and comments, ‘I’m guessing none of you have that one then?’ There’s a bit of an awkward silence then a plaintive voice from the back – ‘I have it on vinyl’. Another huge grin and they continue on.

Many of the songs we’re hearing tonight were released over twenty years ago but they still sound ridiculously fresh. ‘Dolphin’ was released back in 1994 and he still has, ‘no fucking idea why it’s called Dolphin’. Those crunching A minor opening chords (I think, I don’t have my guitar to hand) are the intro to one of the best songs of that decade (don’t @ me on any platform, you know I’m right) and it finishes in an extended guitar jam by guitarist Paul Banks.

‘On Standby’ is followed by an impromptu chorus of ‘Happy Birthday’ to the birthday boy on stage who took it with good grace despite his band-mates piss-taking. He did have a rather pretty pink birthday rosette gaffer-taped to the microphone stand which I’m sure made up for any feelings of impending venerability.

‘Going for Gold’ manages to segue into ‘Suspicious Minds’ before we finish up the evening with ‘Chasing Rainbows’ more than ably assisted by an enthusiastic audience on backing vocals.

The last time the band visited Inverness, Rick was suffering from a throat infection and had struggled to get through the evening. He acknowledges this tonight and thanks everyone for their patience. I reviewed that gig and had commented, “If this was Shed Seven not quite at their finest, then the healthy version must be impressive indeed”. Safe to say they certainly sounded impressive this time round and had more than met expectations. It was one of those rare nights where everyone seemed connected to what was going on stage, the energy and atmosphere a nice reminder why Ironworks is such an asset to Inverness. Despite everything that’s gone on over the past 18 months, you could understand if people were reticent about attending indoor venues. Fortunately, going by the evidence of the last few gigs at the Ironworks, audiences are ready and willing to get stuck back into live music.