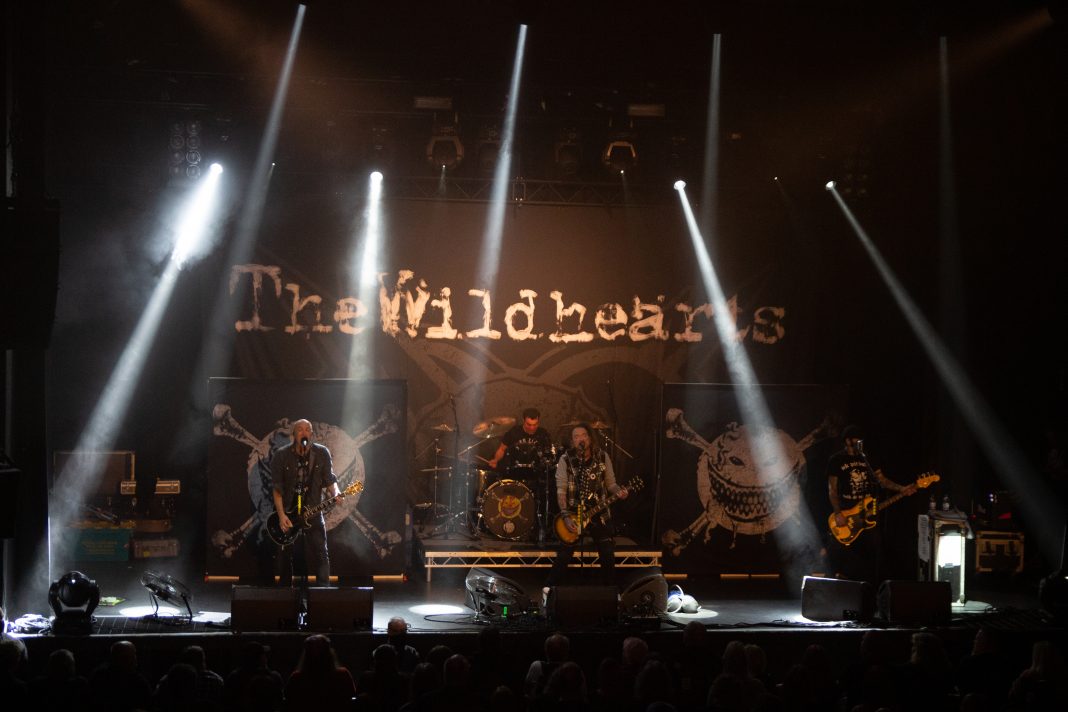 THE WILDHEARTS , with support from BAD TOUCH, CHIMEA AND AT THE SUN, at IRONWORKS, INVERNESS.

It’s the official first night of Monsterfest and it’s a packed program ahead of us for this evening. Sadly work and and a broken car mean I’m late arriving and I don’t catch the first act of the evening. However, I do arrive in time to see At The Sun take to the stage and any of the days stresses are quickly forgotten as I’m absorbed in watching and photographing the band perform. As you’d no doubt expect, much of what you hear tonight is heavy on the guitars and some pretty impressive vocal work by all the bands.

At the Sun are 100% swagger and attitude, they mention in their Facebook bio that there’s ‘no bullshit or gimmicks’, and this is borne out by the performance on stage. It’s loud, its brash and bloody good fun.

Chimea have flown in from Poland and quickly impress those in attendance with their musicianship and humour. We’re told that they’re going to play some old and new stuff but acknowledge ‘you probably haven’t heard any of our songs before, so it doesn’t really matter’. A helpful audience members tells them that that they should just play what they like, which we’re assured will most certainly happen.

I’m not sure if this is their first visit to Scotland but I’d hope it’s not their last. An album is due out next year and I’d strongly recommend keeping an eye out for it based on this evening’s performance.

Bad Touch have been round these parts before and I’ve yet so see them put a foot wrong. Tonight being no exception. They’re essentially sub-headliners tonight having been given a slightly longer set than the first few bands. They have a more soulful blues rock feel than the rest of the acts tonight and occasionally stray into territory inhabited by the likes of the Black Crowes.

A cover of ‘Hand in My Pocket’ is inspired and as singer Stevie Winwood puts it, ‘it’s hard to make a good song sound shit’ and they do it all the justice it deserves. Again, you have to remind yourself that so many of the bands we’re seeing at the moment have little to no touring under their belt in recent months – it’s remarkable that they sound so slick and you’d forgive a little rust or uncertainty. There’s none of that at all and Bad Touch knock it out of the park… again.

The Wildhearts arrive in Inverness with an impressive back catalogue of albums and a set that is brimming with quality from the past 25 years. But something doesn’t seem quite right with the band tonight. The performance is good and they barely put a foot wrong, but it’s contrasted with a distinct sense that they aren’t willing to engage with anyone. There’s very little interaction on stage between band members and next to no chat with the audience. Guitarist and vocalist Ginger Wildheart spends a lot of the time looking into the middle distance while singing or staring fixedly at his guitar rather than make any contact with anyone in his periphery. When he does speak I think he mentions that this is the last gig the band will perform and that would be a damn shame in this writer’s opinion. Would be interesting if anyone else heard the same thing or whether I’d misheard. Tinnitus had kicked in by that point!

Ginger has been very open in the past about his own personal struggles and his twitter feed in the hours leading up to tonight’s performance sounded like a man who had very much had enough. ‘Something died on stage tonight’ being tweeted shortly after the performance ended. I genuinely hope that’s not the end of the band and wish them all the best. It’s been an awful couple of years for everyone and it’s hardly surprising that people are expressing difficulty in coping.

That said it’s still a good performance, ‘Caffeine Bomb’ sounds like it could have been written yesterday and ‘My Baby is a Headfuck’ is a riot of rock n roll and metal fused into a ridiculously good tune and overall, sonically, it just doesn’t let up. CJ Wildheart wasn’t able to attend this evening due to Covid, but was replaced by Chris Catalyst on guitar. He at least seemed to be having a whale of a time on stage and seemed to be enjoying himself, even if the rest weren’t.

That fusion of thrash riffs and pop melodies sounds daft on paper but it’s always worked well for the band. Just listen back to ‘Earth vs The Wildhearts’, ‘Fishing for Luckies’, ‘P.H.U.Q’ and even more recent albums like ‘Renaissance Man’ and you’ll get your fill of fast and frenetic tunes that you probably shouldn’t drive to!

So Monsterfest certainly came back with a bang and gave Highland audiences a much needed breath of rock-tinged fresh air. It’s been a long road to recovery and we certainly aren’t there yet. Monsterfest was that tonic that many of us needed and I can only hope that it goes from strength to strength.

Thanks to the organisers for giving us the opportunity to cover the festival and the chance to share that the Highland music scene is back and it’s alive as it ever was.