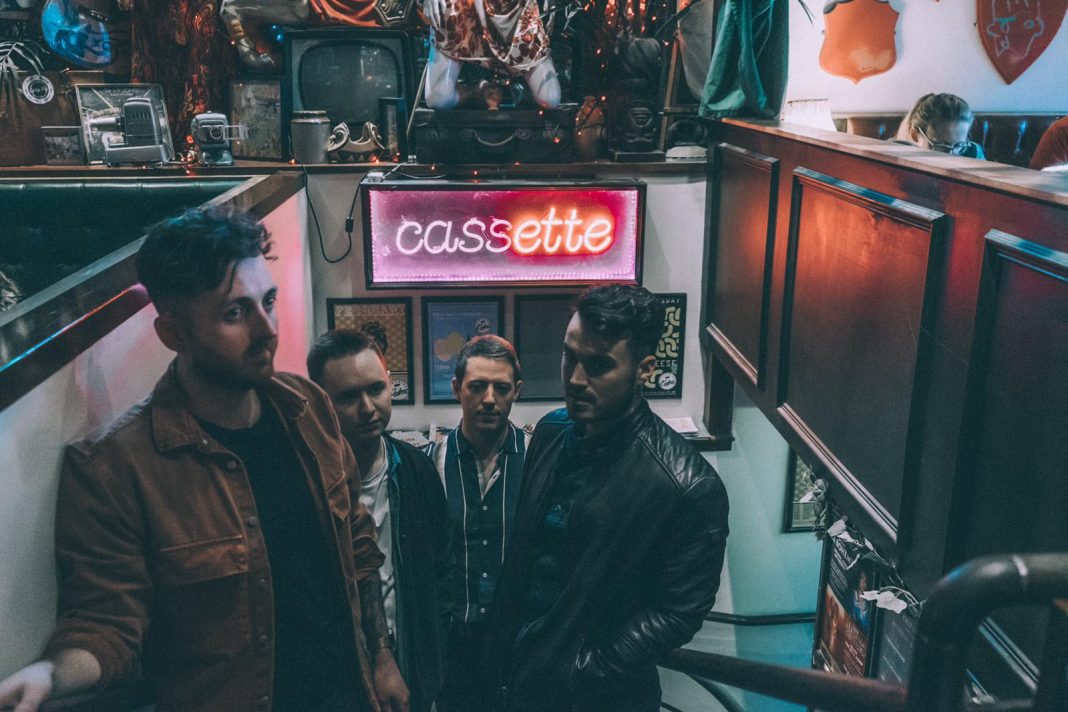 Single is available now on Spotify and Soundcloud.

Edinburgh indie act Paradise Collective released their debut single ‘Lost in LA’ on Friday and it’s available to listen to over on Spotify and Soundcloud right now.

The Edinburgh band are a 4-piece consisting of vocalist and rhythm guitarist Craig Sutherland, lead guitarist Alex Anderson, bassist Craig Robertson and drummer Kale Haswell. The band have focused on trying to emulate the big indie sounds of the Eighties for modern audiences. Formed through the band’s shared love of artists such as The Midnight, Pale Waves and Nightly the band began refining their own individual sound through their DIY studio recordings. I managed to have a chat with Craig to get a bit more background on the band.

Having all grown up together in Caithness and having played in bands throughout high school, it became clear to them that they had a passion for writing music together. After high school, the boys found themselves on separate paths; pursuing further education and developing new career opportunities. After a few years of exploring different musical ventures and focusing on their own careers, the three coincidently, found themselves all living and working around Edinburgh and without hesitation, decided to pick up from where they left off and began sending each other phone recordings of their song ideas. A month later, the makings of their debut single, ‘Lost in LA’ was being recorded at bassist Craig Robertson’s flat in East Lothian. They immediately identified a common style with their writing, which vocalist Craig Sutherland described as, “songs fit for 80s movie soundtracks.”  Having not written any songs together since school, they instantly gelled and within a couple of months had written and recorded enough tracks to start gigging. It was at this point Craig Robertson introduced the band’s drummer (Kale Haswell) to the band. Kale is from the Scottish Borders and was travelling to Edinburgh to study music when he met Craig. The pair started jamming together and quickly became comfortable with each other’s playing styles. Once Paradise Collective had a backlog of songs, it was then that Craig Robertson suggested getting Kale involved. Kale was touring with Scottish band Vistas at the time but really liked the direction Paradise Collective was going and started rehearsing with the band after touring with Vistas.

Since day one, the band have gone for DIY approach, utilizing the various skills and musical knowledge gained since school. Bassists Craig Robertson’s flat is where the ‘magic’ happens, many hours spent drinking alcohol-free beer, recording and producing tracks in his home studio, aka his bedroom. The alcohol-free beer being due to each member having to travel up to 40 minutes by car to get to Craig’s flat.

Craig’s opinion on recording in his flat is that “I’ve always loved going into studios and learning from other producers and engineers however, it doesn’t get much better than writing and recording at home with your mates, it eliminates the constraints of time and money and has allowed us to freely explore and expand our creative ideas.”

Where do you look to for inspiration for your music?

We have been inspired by the sounds of artists from the 80’s such as Kim Wilde, The Cure, Blondie and Ultravox. Although these artists have inspired us to write music, we are not a band trying to replicate them, rather, these artists naturally influence our ideas having been brought up listening to them. However, the range of each member’s musical taste stretches widely, incorporating a varied mix of styles from punk to classical, with each influence shaping the sounds and melodies that the band produces.

How are you managing to keep creative and rehearse during the lockdown?

With the lockdown in place, it is unquestionably tough times for every musician out there. Paradise Collective are new to the music scene, having only just released our debut single ‘Lost in LA’ in the midst of the UK’s lockdown. It has certainly not been the start of the bands journey we had all hoped and practised for. We love playing live and getting to meet people who share our passion for supporting and attending live gigs, which is being eagerly anticipated by the band. With the band unable to meet up at our usual rehearsal space in Edinburgh, we are using this time to continue to write more music and share ideas with each other the way we know best, by phone recordings. We are fortunate that our bass player’s home studio has become the central hub for creating music and having this has definitely motivated us to keep writing. Craig Robertson can create full tracks at home while the rest of the band send him their ideas along the way. However, it is not ideal because we prefer to bounce ideas off each other in the momentum of the moment. So basically, we can’t wait to all meet up and have an alcohol-free beer writing sesh again!

Are there any festivals or venues that you have your eye on for gigs post-lockdown?

As previously mentioned, we are all keen supporters of live music and having grown up in Caithness, we have found ourselves gravitating towards Belladrum, the closest festival to home. It is a wonderfully run festival which sells out every year, its imagination stretches beyond just having the biggest current artists on the bill and always showcases local unsigned talent. In addition, the location makes it easier than most other major festivals for all our friends and family to attend, making it sure to be a memorable show for everyone. In terms of gigs, there are many great venues across Scotland which we would love to play, primarily smaller capacity venues like; Sneaky Pete’s, Mad Hatters, PJ Molly’s and King Tuts, because this would help make our shows more intimate, which would allow us to better engage with our audience and ensure everyone enjoys the experience just as much as we do. After all, having fun with every element that being in a band with your mates brings you, is why we do it!

For the gear freaks amongst us, can you tell us what instruments and effects you use?

In terms of equipment, we definitely have a soft spot for anything which helps us create ‘dreamy atmospheric and glassy clean’ sounds. Currently Alex and Craig Sutherland both play Fender Strat’s through a Vox AC30. Alex’s pedal board is made up of an MXR Chorus, Bluesky reverb and a Wampler Tumnus drive pedal. Craig Sutherland uses a Boss rv-6 reverb, TC Corona chorus, TC Hypergravity compressor and a Boss blues driver. Our Bass player Craig Robertson is staying true to the bands Fender family and uses a Squire Jazz Bass and plays live with an Electro Harmonix Bass Micro Synthesizer, Fulltone OCD, Boss CS-3 compressor and MXR M109 6-Band Graphic EQ. Our drummer Kale plays a Mapex Saturn III kit with a mix of both Zildjian and Istanbul cymbals, Vic Firth 5B drumsticks and also uses the Alesis Compact Percussion SamplePad. The main attraction to Fender Strat’s is their tonal versatility and the clarity of sound you receive from their single coils and 5-way selector. The Stratocaster is definitely key to us achieving the glassy clean sounds which are supported through open chords and tunings.

And finally, do you have any future releases in the pipeline?

Yes, we have plans for future releases. Prior to lockdown we were fortunate enough to have recorded a number of tracks which are currently being produced by Craig Robertson at his flat. Our next single, ‘Can You Tell Me?’ is actually mixed and ready to go, but we will let people enjoy our debut single, ‘Lost in LA’ for a little longer yet. Bassist and Producer Craig Robertson said, “If you like Lost in LA then you’re in for a treat, our next single has even more synth, euphonic lead lines, compelling vocals, driven beats and lifting bass-lines”.