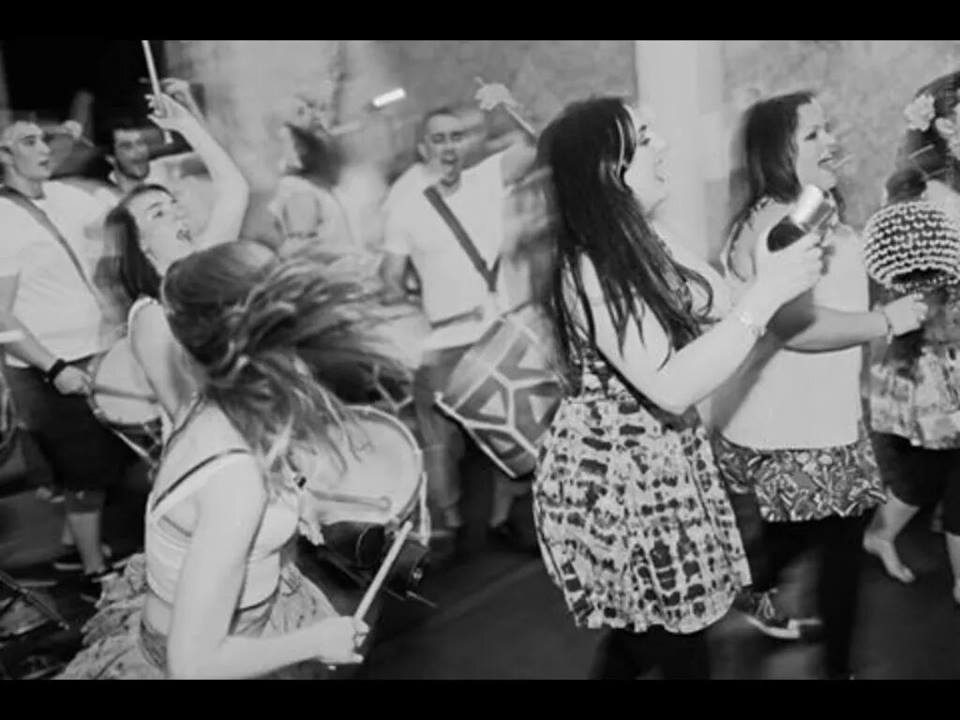 Ahead of their gig at the Bella Bar Stage at Belladrum 2019, Aileen Ogilvie vocalist for  of Rhythm Wave answers a few questions for IGigs.

Created by Ronnie Goodman in 1993 at Perth College (UHI), Rhythm Wave bring together the exciting rhythms of Brazil, including Samba Reggae and Samba Merengue, and the voice of traditional Gaelic song with flair and passion. With a mix of students, staff and alumni the band has performed at venues and festivals throughout the UK. They return to Belladrum for a 6th time this year so we were pleased to ask Aileen a few questions about the collective.

Rhythm Wave consists of a mix of students, staff and alumni from Perth College (UHI), how does that dynamic impact on the creativity of the group?

It’s a great dynamic, a mix of ages and experience. Everyone involved has their own unique style and approach, things continue to evolve and new members bring new energy and fresh ideas. All members of the band are involved in other bands or solo projects too so there’s a diverse range of creative talent amongst the group. It’s a fantastic family to be part of!

How do the festival audience respond to Rhythm Wave?

We get lots of dancing! People get into the groove and move along with the rhythms. We really enjoy the audience participation, it keeps the energy up!

Rhythm Wave has quite a legacy, what do you think have been the highlights for the band?

Rhythm Wave was founded just over 25 years ago by UHI lecturer Ronnie Goodman and he is still the driving force and musical director. We’ve had so many opportunities as a band and it’s has given staff, students and alumni a fantastic opportunity to explore rhythms from different cultures, gain a wide range of performance experience, be involved in many collaborations and also to be involved in passing on the knowledge gained through teaching in community projects.  We’ve played so many different kinds of gigs and venues from street processions to club nights to festivals to concert halls.

Glastonbury deserves a mention here, the band has played many times at the festival. Other highlights include some of the collaborations we’ve had including Brazilian percussionist Nana Vasconcelos who definitely inspired us and has a special place in the heart of the band.

What do you think it is about the Brazilian sound that resonates with audiences?

Rhythm Wave has had some impressive collaborations in the past, which performers would you most like to work with in the future?

We really enjoy collaborating. Some highlights for us include Nana Vasconcelos, Carlos Nunez and Rock Choir to name a few. We like sharing and connecting different cultures – Brazilian, Africa, Chinese, Galician, Indian and of course Scottish through all the work we do with Gaelic song.

I personally would love a wee collaboration with Elephant Sessions. There’s a breakdown at the end of their tune Ainya’s that would be great to jam along to ☺

As a band Rhythm Wave have played Belladrum a few times, are there any particular moments of experiences at the festival that stand out?

This will be our 6th Belladrum as a band and throughout the years we’ve been coming we’ve played on the Venus Flytrap, some grass gigs out on site and opened the Garden Stage. All of these experiences have been memorable for various reasons and it’s mostly down to the interaction from the audiences.

We did a grass gig outside of the verb garden one year and there was a tiny wee girl about 2 or 3 years old dancing beside us so we gave her a shot of a pandeiro and she joined in!

The festival has such a great atmosphere and we love being part of it. We like the theme element and always get involved so watch out for some cosmic samba this year!

You can catch Rhythm Wave on Saturday 3rd August 20:45 at the Bella Bar Stage.

You can also catch Hamish Matters (featuring Rhythm Wave’s Aileen Ogilvie) in the Verb Garden on Saturday Night 7.15pm, a celebration of the life and works of Hamish Henderson featuring a mix of poets, musicians and singers .

Keep track of Rhythm Wave via their Facebook page.