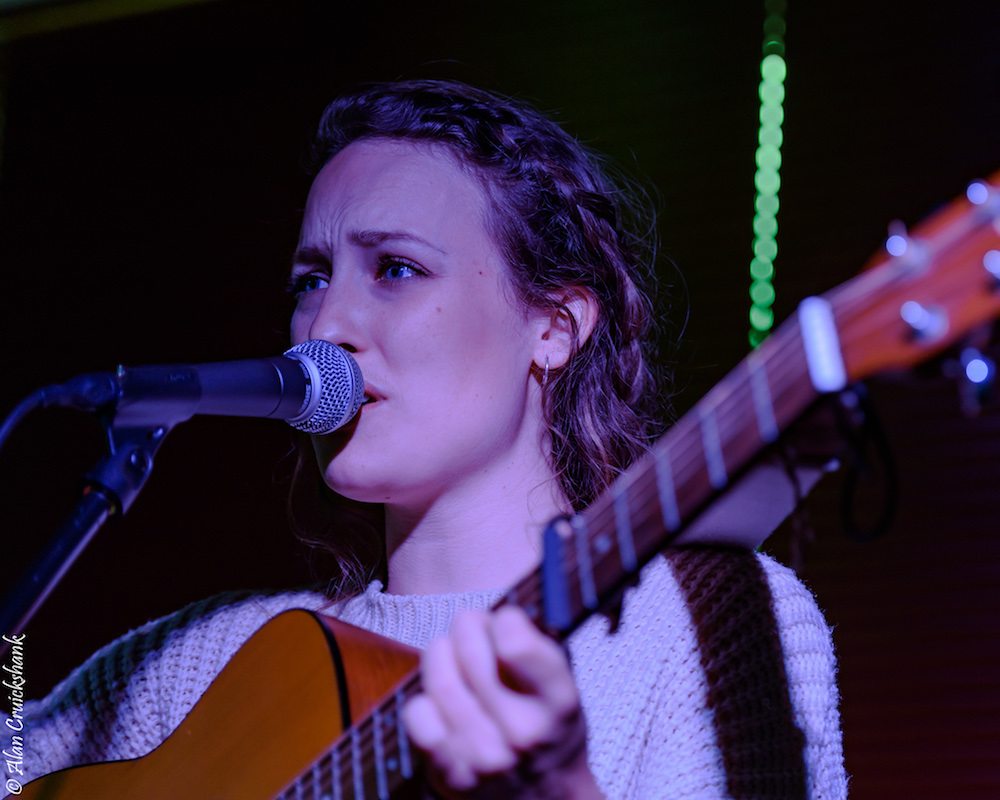 The evening at The Old Brewery boasted that it was bringing together “three magnificent folk acts playing in a unique and inspiring venue”. Magnificent it must have been as it inspired our photographer to take out his notebook;

Daudi Matsiko, who was born in the UK and hails from Nottinghamshire, took some time between his carefully crafted music to tell his audience how he and his fellow tourers went for a dip in the Cromarty firth earlier in the day, he was sipping on some tea whilst commenting it may have not been the best idea! However, his dip in the Cromarty Firth did nothing to dampen his enthusiasm for the this part of Scotland or the intimate venue he found himself enjoying with around 30 appreciative music lovers.

Daudi showed throughout his set that he has a very delicate voice that he uses to its full use and matches perfectly with his melancholic guitar playing, Daudi’s lyrics, but equally importantly the way he sings them, left the audience in no doubt he means every word of every sentence.He showed a strength as well as delicacy in his voice that was quite hypnotic to sit and listen to, my personal favourite from his set was “You Can Do Better Than Me, But I Hope You Don’t”.

A bare footed Izzie Yardley exclaimed before starting her set that she also (unwisely) went for a dip in the Cromarty Firth, amazing the effect a sunny day beside the sea can have on people. Izzie then went on to say how much she has been loving this tour in Scotland and told us that she hails from London for which she sheepishly apologised for a few seconds later to a murmur of giggles from the audience, no apologies were required.

With just an acoustic guitar for company Izzie showed early on that she was going to make the sound guy work for his crust tonight as her wonderful voice went up and down octaves with ease, it really is something special to sit and drink in this incredible voice. Her music was joyful, soulful but also punchy accompanied with gorgeous melodies on her guitar. At times her soaring voice caused a few eye brows to raise in the audience as they listened and perhaps could not quite believe that such a voice could come from this young singer song writer, Izzie Yardley is a genuine talent to be watched for the future.

Evering consist of Scottish singer song writers Dawn Coulshed from the Black isle (that got a good cheer from the Cromarty crowd) and Chris Yendell from Helensburgh whom played the last slot of the evening.

Chris showed from the get go that his raw but superbly controlled voice was going to give the audience something very different to what they had already been enjoying, combined with his skilful use of his acoustic guitar and Dawns beautifully educated fingers on the piano we all knew we were in for a treat, and we were right. My favourite song of the entire evening was “Driftwood” the raw voice of Chris as mentioned earlier,  combined beautifully with the stunning clear tone perfect voice from Dawn, they took this song to a different level, the harmonies during this song were beautiful and totally engaging.

Each of the acts had a unique vibe and approach and ,with a fair wind, promise much for the future.