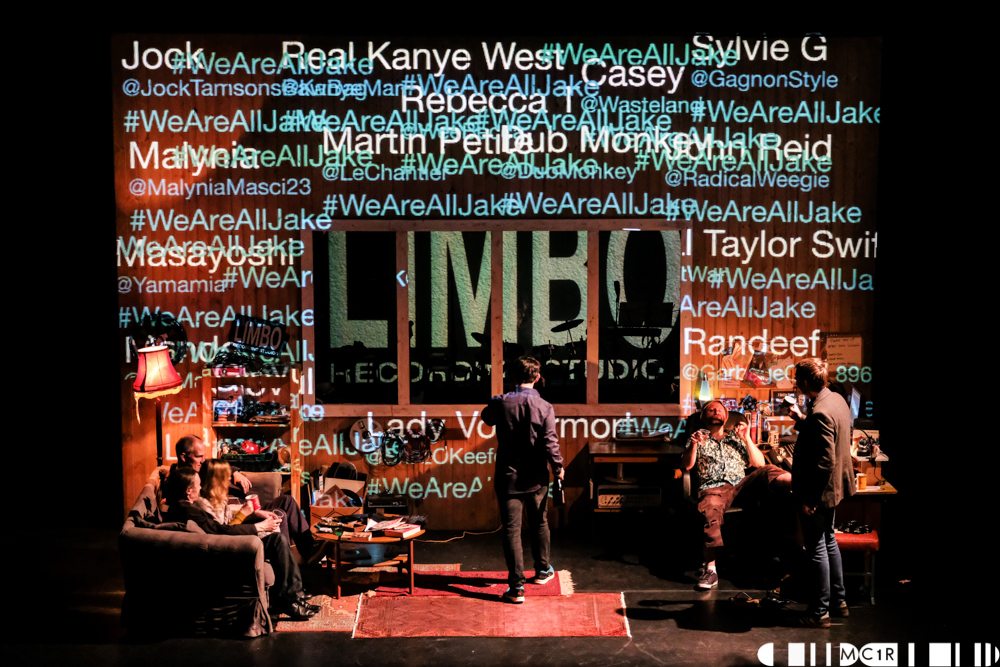 Demystifying the ‘glamour’ of the recording studio, which turns out to be a pretty grubby groundhog-day burrow, the play spins around Jake the studio owner who is burnt out and out of time literally and figuratively. He steadfastly refuses to surrender his hard won muso values.

If Jake thought that his biggest ethical dilemma was whether to stay true to his art or cut to the cheap seats for a quick one hit wonder, then that dilemma is thrown into sharp relief. Nick – a kind of best mate worst nightmare permanent adolescent – ‘borrows’ and remixes a version of one of the songs. After some YouTube success it makes it into the Gitmo top 5 torture songs – now that folks, is a real ethical dilemma.

This production pulls off a difficult balancing act – it communicates the meaningless boredom without ever becoming boring – this is due in no small part to the sparky, edgy, energy from the two main characters Jake and Nick. However I read the ennui as doubly inscribed: it represents the limbo of the studio, I mean 15 years to record an album hoping for your fifteen minutes of fame, sits in stark contrast with the speed of news, the fleeting consciousness of social media that sees us move on relentlessly to the next click bait spotlight item: compassion fatigue that can be punctured momentarily by something as ubiquitous as an orange boiler suit.

Throughout, clichés and stereotypes morph into complex metaphors. Visually stunning, it adds considerable depth to a narrative we think we know, liberty and choice that we take for granted, that we seldom stop to think about. The sound is perfect and as for the music – well in amongst all of the action A Band Called Quinn perform their new album – buy it, you wont regret it. However, after Biding Time and now tonight I find myself longing for a straight-up A Band Called Quinn gig – can someone please make that happen.