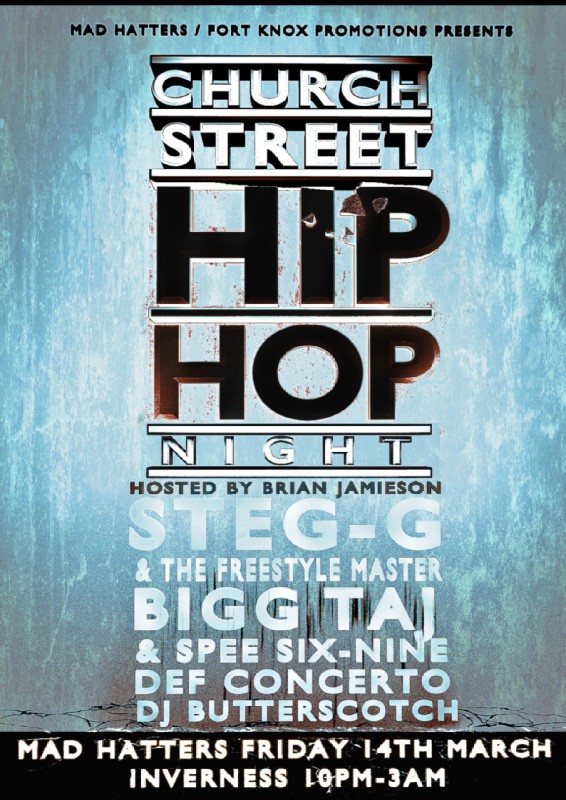 Church Street Hip Hop night comes back to Mad Hatters on the 14th of March.

Previous nights have included the likes of Kobi Onyame, Loki (whose interview was on of the most interesting on the site in 2013) and Damaged Goodz. The first run out of the Hip Hop night for 2014 sees a particularly strong line-up of established acts.

The bill includes Bigg Taj whose impressive array of support slots include GZA, Methodman & Redman, Immortal Technique and Grandmaster Flash. His approach is “rapid fire [with] off the wall rhythmic delivery and ability to produce more noises than a fully loaded Akai sampler”. Runner up in the 2009 UK beatbox championships, he joined with Louie (of Hector Bizerk)on the 2011 release ‘Paranoise’.

Bigg Taj is joined on the night by long standing collaborator, Spee Six Nine who has been on the scene for over ten years. His debut album ‘Army of One

‘ was followed up by EP ‘Verses’  with view to the duo releasing a long player this year.

Another couple of long term collaborators in Steg-G and The Freestyle Master also take to the stage alongside Def Concerto, with proceedings hosted by Brian Jamieson.